“They told me not to tell my family where I was,” a Haitian asylum-seeker recounted. “I heard people being taken away in the hall [of the hotel] screaming, ‘I’m not going! I’m not going!’” 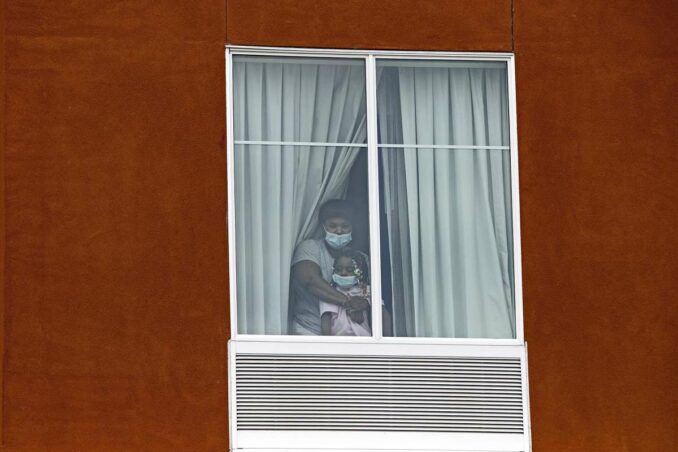 An im/migrant Haitian mother and her daughter are incarcerated by ICE in a hotel room in San Antonio on July 1.

In the month of July, Immigration and Customs Enforcement held nearly 200 immigrant children, including babies and toddlers, in hotels in El Paso and McAllen, Texas, as well as Phoenix, Ariz. This violated a decades-old court settlement that was meant to protect children from poor conditions in detention and also limit the length of time that a child is held in ICE custody. After 20 days, children are supposed to be released to a family sponsor who is living in the U.S. More often than not, this settlement is discounted by ICE.

While detainees were being held in hotels, ICE allowed families to make one phone call, but instructed them not to share their location with family members on the phone. These families were denied all information, including the name of the hotel where they were being detained and the location. They only received vague answers from the officers guarding the hallways.

A reason was not provided about why they were taken to the hotel or the amount of time they would be detained. Families were left anxious, not knowing if they would be deported or if they would eventually be able to see their family and friends who were waiting for them in the U.S.

These families were secretly taken to deliberately undisclosed areas, making it impossible for them to receive any sort of legal services because no one knows of their location. Similar to what happened at the Portland protests, the government has intentionally used unmarked vans to transport these families. They have been taken to unofficial holding facilities, such as these hotels, to house them until their untraceable expulsion.

This is consistent with ICE practice; for instance, detention centers are often built in isolated areas, making it difficult for attorneys to offer their services.

The current administration has abused U.S. code Title 42 amid the pandemic in order to shut down the border and turn away all immigrants. Since March, the U.S. Customs and Border Protection has expelled over 105,000 immigrants under the guise of public health concerns. (tinyurl.com/yaostc7z) This expulsion may include many refugees fleeing possible death in their home countries. Their right to be screened for an opportunity to apply for asylum in the U.S. has been disregarded by government officials.

The inequity and overpolicing that Black communities face in the U.S. has also made its way into immigrant detention. According to a study by researchers Franco, Patler and Reiter, Black immigrants are six times more likely to be sent to solitary confinement. (osf.io/preprints/socarxiv/zdy7f/) According to RAICES, an immigrant rights nonprofit based in Texas, the amount paid for an average bond was about $10,500. For Haitian immigrants, the average bond paid was much higher, about $16,170. The majority of the families who have been hidden in hotels have been Black immigrant families.

ICE was ostensibly formed to protect the U.S. from terrorism in the period after Sept. 11, 2001. After nearly 20 years, the agency has caused an extensive amount of trauma to children and families by separating them. Its agents have been accused of sexually assaulting thousands of children and have also mentally and physically abused adult immigrants.

The government treats every single immigrant as a criminal threat, greeting them at the border with handcuffs and jailing them for seeking a better and safer life. But ICE is the real criminal.