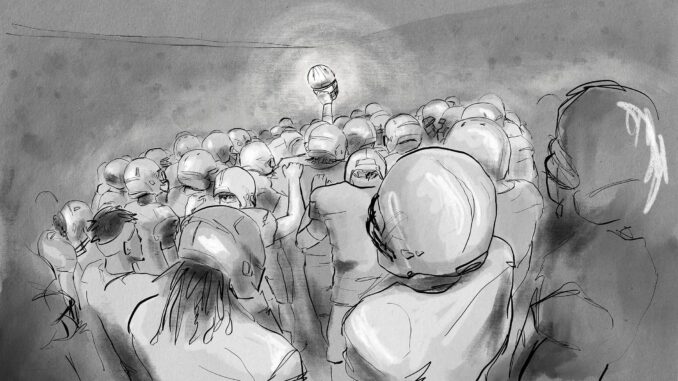 Since March 12, the coronavirus has impacted every sector of U.S. society, not only health but also social life.  With all the suffering going on and with no national public health care system in the U.S., different sectors of society are seeking to protect themselves by preventing the spread of the virus as best they can, especially considering the extremely anti-science president in the White House. At the same time they are organizing around unifying political demands.

One such group that is organizing are college football players under the auspices of the National Collegiate Athletic Association. The NCAA is a not-for-profit institution that promotes “nearly half a million college athletes that make up the 19,886 teams that send more than 57, 661 participants to compete each year in the NCAA’s 90 championships in 24 sports across three divisions.” (ncaa.org)

The top 15 college football programs in the country are worth anywhere between $471 million to $1.1 billion if each program were to be sold on the open market, according to the Wall Street Journal. (April 1, 2019)

The NCAA has averaged over $31 million annually in TV and marketing rights revenues from college football games, since at least 2017. Mark Emmert, the current NCAA president, pocketed almost $4 million in combined salary and compensation in 2019. The 25 highest paid college football coaches in 2019 each made between $4.1 million and $9.3 million in salary.  (Fan Buzz, Aug. 9)

While all these millions of dollars were being exchanged between the NCAA, coaches and other big business interests, the obvious losers were the student-athletes who do not get paid one red cent for providing their labor that produces this wealth on the playing field and fills stadium seats in the tens of thousands.

In an unprecedented move last October, the NCAA Board of Governors approved a law that all student-athletes would be allowed to be financially compensated for use of their image, name and likeness on merchandise for sale like T-shirts and video games. This law came on the heels of the Fair Pay for Play Act passed by the California legislature, allowing college athletes in that state to sign endorsement deals and licensing contracts starting in 2023.

This was an important piece of legislature, leading other states to debate similar acts, considering the fact that 55% of college football players are African American and come from lower-income families.

These super-exploited student-athletes have begun to exert their power, especially since the COVID-19 pandemic in March, the Black Lives Matter struggle accelerating in late May, and their ongoing fight for economic rights since the Northwestern University football team attempted to unionize in 2015 and was rejected by the National Labor Relations Board.

One of the most powerful Division I conferences in the NCAA is PAC-12, with teams based on the West Coast. Football players, along with players in other sports in this conference, presented a set of demands on Aug. 2 in the sports publication, The Players Tribune, that reflected concerns on health and safety dealing with the coronavirus, social injustice and the right to organize.

Jake Curhan, a redshirt senior at Cal who helped organize the players, stated,  “When we first got started, our only thought was coronavirus. We started talking to some of our teammates, and they said, ‘What about the Black Lives Matter issue? We don’t want to detract from their issue.’ The more we started talking with them, it became clear the two were the same issues.”  (theundefeated.com, Aug. 3)

Andrew Cooper, a cross country runner and co-president of Cal’s student-athlete advisory committee, stated two important lessons in the same article, “I learned how this system will never change from within. Ever. The only way a labor movement can be started is with a work stoppage.”

Players in the Big Ten conference have also come together to develop their own set of demands. Big Ten and PAC-12 have cancelled their seasons until next year. Other conferences could do the same.

The players in  PAC-12 put out a #WeAreUnited resolution that reads:

“To ensure future generations of college athletes will be treated fairly, #WeAreUnited.

“Because we are being asked to play college sports in a pandemic in a system without enforced health and safety standards, and without transparency about COVID cases on our teams, the risks to ourselves, our families, and our communities, #WeAreUnited.

“Because we must have adequate COVID testing to help protect our health, #WeAreUnited.

“Because we are prohibited from securing representation while being asked to sign documents that may serve as liability waivers, #WeAreUnited.

‘Because we should not be stuck with sports-related medical expenses, including COVID-19 related expenses, #WeAreUnited.

“Because any player who does not feel comfortable playing this season should be free to opt out without losing their scholarship or any eligibility, #WeAreUnited.

“Because immoral rules would punish us for receiving basic necessities or compensation for the use of our names, images and likenesses, while many of us and our families are suffering economically from the COVID-19 fallout, #WeAreUnited.

“Because we should be included in equitably sharing the revenue our talents generate, especially in a pandemic, #WeAreUnited.

“Because eliminating lavish salaries and facility expenditures to preserve all sports must be prioritized, #WeAreUnited.

“Because the NCAA has failed us and we are prepared to ensure that our conference treats us fairly whether or not it continues its NCAA membership, #WeAreUnited.

“In forming alliances with college athletes from other conferences to unite with us for change, #WeAreUnited.

“#WeAreUnited in our commitment to secure fair treatment for college athletes. Due to COVID-19 and other serious concerns, we will opt out of PAC-12 fall camp and game participation unless the following demands are guaranteed in writing by our conference to protect and benefit both scholarship athletes and walk-ons.”

To read the PAC-12 Unity demands, go to tinyurl.com/y6sazr8f/.