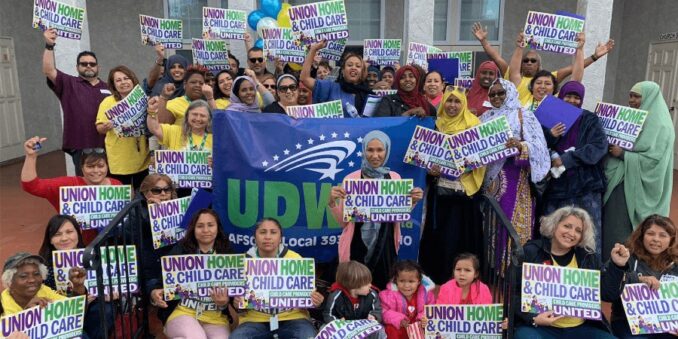 Already a membership organization, the CCPU was officially recognized as a union with the election’s landslide victory. Some 45,000 publicly funded childcare providers will be represented in contract negotiations.

This workforce is composed primarily of women — Black, Latinx and immigrant — making this victory even more significant as part of the overall fight for racial and economic justice and gender equity. Although these workers do the vital job of nurturing and educating children, their work is severely undervalued, and they are super-exploited in this racist, sexist, anti-poor economic system.

Many of these workers earn $12 an hour, and some as little as $5. They have no paid sick leave and must fund their own health coverage. One-fourth of them live under the official poverty line, and 60% depend on some form of public assistance, such as food stamps.

‘We can fight for respect and dignity!’

CCPU members celebrated in a Zoom press conference following announcement of the election results. Miren Algorri, activist and childcare provider, said from Chula Vista, “We’re educators. Essential workers. We’re putting our lives on the line to care for these kids. Our union means we can fight for the respect and dignity that we deserve.” (AFSCME press release, July 28)

Childcare workers have been categorized as “essential workers” during the COVID-19 pandemic. During this crisis, they are providing crucial services for frontline workers, who rely on them to care for their children. Even pre-pandemic, these workers were vital in the lives of working parents. But today, with the virus raging in California as in other states, both day care providers and other essential workers are risking their health every day.

This union win applies to workers who mostly provide in-home childcare, often alone or with one or two assistants, and who receive state subsidies for low-income children. But they have not been considered state employees.

As a result of the heightened union campaign, Gov. Gavin Newsom signed a law on Sept. 30, 2019, giving these workers the right to unionize, organize as the CCPU and bargain together with the state for “livable” wages, pensions, more training and increased state subsidies for low-income children. Importantly during this pandemic, they can press for health insurance. To date, in-home childcare providers in 11 other states have won the right to bargain collectively with their state governments.

This victory will aid in the struggle for affordable, subsidized and accessible childcare in California, a necessity for millions of working parents and their children there and around the country.

This struggle began in 2003. During his two gubernatorial terms from 2003 to 2011, Republican Arnold Schwarzenegger repeatedly vetoed legislation allowing unionization by state-subsidized childcare providers. Then in 2011, after the California Legislature passed a law allowing them to bargain collectively, Gov. Jerry Brown, a Democrat, vetoed it.

Even Newsom was not initially averse to cutting subsidies for childcare providers. The original 2020-21 state budget cut payments by 10%, which would have been devastating! This proposal was reversed. However, the budget reduces funding for expanding state-subsidized preschool programs for thousands more children, along with other pro-child programs. It does guarantee government subsidies for frontline workers’ children for a set period of time.

Undoubtedly, the union drive by childcare providers pressured Newsom to reverse the subsidy cutbacks. This shows their movement is strong.

‘Largest organizing drive of the century’

AFSCME leaders have called this “the largest [U.S.] organizing drive of this century.” That this victory was achieved during a time of class warfare against unions and workers by the Trump administration, its political allies, corporation owners, Wall Street bankers and their media mouthpieces shows that workers can organize and succeed. It is a big boost for organized labor — and for all workers.

The Trump-appointed National Labor Relations Board has directly attacked the right of workers to unionize and bargain collectively. The board has weakened and overturned workers’ existing legal protections, which labor unions and workers fought for, and seeks to modify labor laws to undermine workers’ rights even more.

California’s new union members have shown that workers can fight back and win!