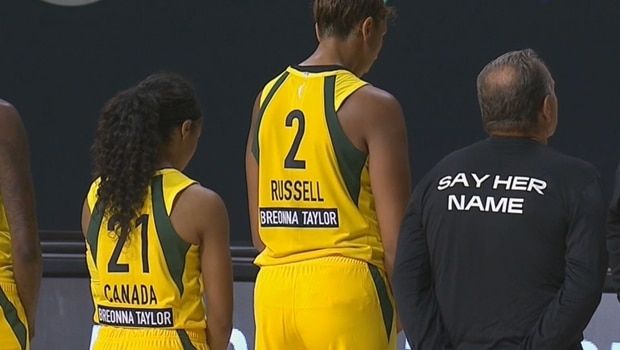 U.S. athletes continue to express their solidarity with Black Lives Matter protests around the country, as professional sports attempt to resume some kind of normalcy since totally shutting down in mid-March due to the COVID-19 crisis.

For instance, the Women’s National Basketball Association voted to dedicate its entire season to women of color who have lost their lives to police violence.  All WNBA players will be wearing jerseys with messages of either #SayHerName or the names of women murdered by the police, most notably Breonna Taylor. The 26-year-old African American emergency medical technician was murdered by a Louisville, Ky., police officer in March during a no-knock drug search warrant.

Taylor was fatally shot eight times.  None of the three white officers involved in the shooting were arrested or charged.  Only the officer who did the shooting was fired.  Protests demanding the arrests of all the officers have been taking place almost daily in Louisville, and other cities since May 25.

The season opener of the New York Liberty and the Seattle Storm on July 25 began with an empty court and 26 seconds of silence in honor of Taylor’s age when she was killed.  After both teams came out, they then purposely walked off the court during the playing of the national anthem — in defense of Black Lives Matter.

Layshia Clarendon, a New York Liberty guard and representative of the newly formed WNBA Social Justice Council, said before the game began, “We will be a voice for the voiceless.” (New York Times, July 25)

Major League Baseball began its truncated 60-game season with all players from the defending MLB champions, Washington Nationals and the New York Yankees, kneeling during the playing of the national anthem before their opening season game on July 23.

Dr. Anthony Fauci, the U.S. infectious disease specialist — who has been vilified by Trump during the coronavirus pandemic — threw out the honorary first pitch at this game, usually reserved for the U.S. president.  Every player on the Cincinnati Reds and Detroit Tigers teams also took a knee before their game.

The Tampa Bay Rays team officially tweeted on July 24: “Today is Opening Day, which means it’s a great day to arrest the killers of Breonna Taylor.”  Every MLB team has added to their individual infields the insignia “BLM.”

It is significant that the MLB is recognizing BLM since unlike the majority Black WNBA, the National Basketball Association and the National Football League, African Americans make up a very tiny minority in the MLB compared to Latinx and white players.

Is BLM a movement or a ‘lifestyle’?

LeBron James from the NBA’s Los Angeles Lakers made the following statement on July 24:  “A lot of people kind of use this analogy, talking about Black Lives Matter as a movement. It’s not a movement.  When you’re Black, it’s not a movement. It’s a lifestyle. We sit here and say it’s a movement, and, OK, how long is this movement going to last? ‘Don’t stop the movement.’ No, this is a walk of life. When you wake up and you’re Black, that is what it is. It shouldn’t be a movement. It should be a lifestyle. This is who we are.  I don’t like the word ‘movement’ because, unfortunately, in America and in society, there ain’t been no damn movement for us. There ain’t been no movement.” (ESPN)

BLM is not only a statement of fact, but it has a organizational formation to back it up, ever since it was founded by three Black women, Patrisse Khan-Cullors, Opal Tometi and Alicia Garza in response to the racist lynching of Trayvon Martin by vigilante George Zimmerman in 2012.  One cannot separate one from the other.  James has recently been outspoken on the police murders of George Floyd and Breonna Taylor.

The Black struggle has taken on many organizational forms since the military defeat of the slavocracy in the Civil War, followed by Black Reconstruction to the Garveyite Movement to the Civil Rights and the Black Liberation Movement to BLM.  No matter the form, the goals of the Black struggle have been the same — to win economic and political equality on the same level as whites.

The big question is: How is this to be achieved?  Since the demise of Reconstruction, over 150 years ago, these various forms of struggles have gone through victories and defeats under a capitalist democracy — a democracy for the super-rich dominated by white supremacy.

For BLM to truly become a “lifestyle” and a reality, only a socialist revolution will ultimately win that goal with the eradication of racism and all forms of oppression under a true workers’ democracy.  But until that day, BLM will need the broadest support possible on a classwide basis as the example of progressive athletes is showing.