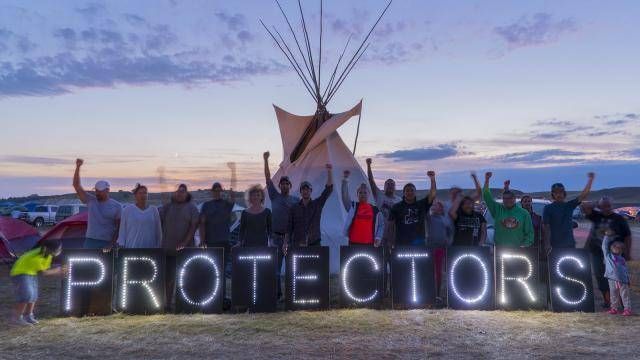 On March 26, Judge Boasberg had ruled the Army Corps of Engineers violated the National Environmental Policy Act and glossed over the devastating consequences of a potential oil spill in its 2016 decision to permit the pipeline. (tinyurl.com/yy7ftzes) His July 6 ruling concluded that shutting down the pipeline was necessary, based on the seriousness of the government’s legal violations and potential damages to the Tribe and third parties. The Corps must reexamine the risks of the pipeline and prepare a full environmental impact statement.

The Oceti Sakowin — the Lakota/Dakota/Nakota Sioux Nation — courageously battled construction of DAPL to protect their lands and waters, their sovereignty and the lives of future generations, and to protect the great Missouri and Mississippi Rivers. Indigenous peoples from throughout the Western Hemisphere went to Standing Rock. Supporters came from all over the world.

DAPL bulldozed sacred and burial sites and used G4S and TigerSwan mercenaries against the water protectors, all on unceded stolen lands. Former N.D. Gov. Jack Dalrymple, who invested in the pipeline, mobilized cops from other states and brought in the National Guard to repress unarmed peaceful adults and children.

Water protectors were beaten, bitten by attack dogs, pepper sprayed, shot with rubber bullets, injured by criminal use of sound cannons, brutalized while praying, strip searched, numbered and held in dog kennels, and hosed down with fire hoses in freezing weather. A young woman had her arm blown up. The National Guard used snipers to threaten water defenders and even shot horses with rubber bullets, killing one. Indigenous water protectors, land defenders and medics were arrested.  One noted case involved a setup of a medic, Red Fawn Fallis, on a felony charge by an infiltrator posing as a boyfriend. (tinyurl.com/y7qn69xc)

Energy Transfer Partners built DAPL to move crude oil from western North Dakota under the Missouri River, at Standing Rock Reservation, to a pipeline in Illinois and to refineries in the Gulf for export. But while the Army Corps of Engineers is under federal mandate to engage in meaningful consultation with reservations before signing off on pipeline route permits, Standing Rock was never properly consulted.

Standing Rock is under the 1851 Treaty of Ft. Laramie. While treaties are recognized under the U.S. Constitution as the “law of the land,” all treaty lands, according to a 1908 Supreme Court ruling, must reserve sufficient water to fulfill the purposes of reservations. These rights are known as federal reserved water rights or Winters rights.

Yet pipelines corrode and rupture. Fossil fuel infrastructure causes damage to the health of communities and ecosystems. A Missouri spill on the pipeline would destroy clean water for Standing Rock and 18,000,000 people downstream, in addition to wildlife species and millions of square miles of habitats.

The Standing Rock Tribal council has voted unanimously every year since 2016 to continue legal challenges to the pipeline, which carries 600,000 barrels of crude oil a day within a mile upstream from Standing Rock Reservation.

According to Earthjustice attorneys, the shutdown will remain in place pending completion of a full environmental review, which normally takes several years and issuance of new permits. “It took four long years, but today justice has been served at Standing Rock,” said Earthjustice attorney Jan Hasselman, who represents the Tribe. “If the events of 2020 have taught us anything, it’s that health and justice must be prioritized early on in any decision-making process if we want to avoid a crisis later on.”

“Today is a historic day for the Standing Rock Sioux Tribe and the many people who have supported us in the fight against the pipeline,” said Tribal Chairman Mike Faith. “This pipeline should have never been built here. We told them that from the beginning.”