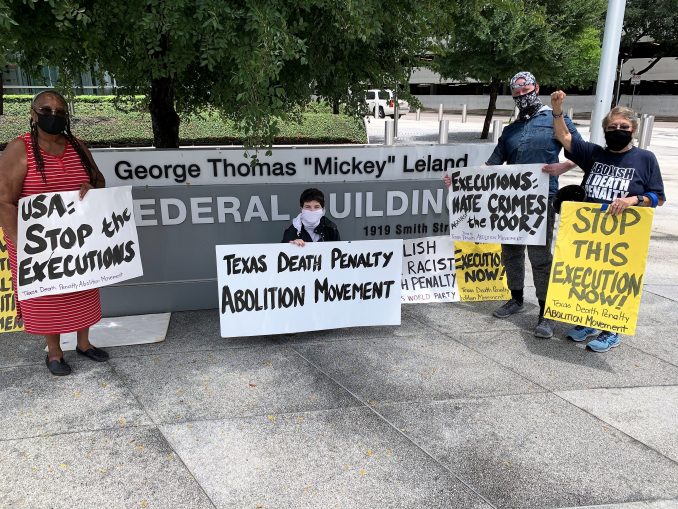 In just four days, the U.S. government doubled to six the number of federal executions since Congress reauthorized the federal death penalty in 1988. Three men were put to death in the federal penitentiary in Terre Haute, Ind., on July 14, 16 and 17.

After a flurry of last minute appeals, stays of execution, the lifting of stays, injunctions and petitions regarding the nature of the drugs to be used, witnesses fearing exposure to COVID-19 and victims’ families asking for a halt — Daniel Lee, Wesley Purkey and Dustin Honken, all white, are now dead. Another federal prisoner, Keith Nelson, is scheduled to be executed on Aug. 28.

While the U.S. should be shut down to stop the spread of the COVID-19 virus, we should all be asking why President Trump’s Department of Justice was in such a rush to schedule these executions? Only three federal executions were previously carried out since 2003.

From the point of view of peoples’ health, there are many unanswered questions. Attorneys could not visit their clients for months due to the pandemic. Investigators could not work. Victims’ families feared traveling to witness the executions. Spiritual advisors worried about the virus, as did reporters assigned to cover the executions. The execution team feared the virus after one of its members tested positive. The disrespect for people’s health and lives is abhorrent.

Why the rush? William Barr, head of the DOJ, announced the rush to the summer’s executions June 15. This is in stark contradiction to the trends regarding the death penalty in the U.S. Public support for the death penalty is currently at historic lows, according to public opinion polls. The number of people being sentenced to death is down. The number of executions is down.

What is up is the number of people being exonerated. This year Kareem Johnson had all charges dismissed against him in his Pennsylvania capital murder case, making him the third death row exoneration this year, and the 170th that Witness To Innocence has confirmed since 1973.

According to the National Registry of Exonerations, there have been 2,649 exonerations of various crimes since 1989. These exonerees lost 23,590 years while they were wrongfully imprisoned. In a 2017 report, they found that African Americans are only 13% of the U.S. population, but a majority of innocent defendants wrongfully convicted of crimes and later exonerated.

The link between slavery and executions

The long, racist history of capital punishment is well documented. Slavery and racist lynching in the U.S. led to the institutionalization of executions. The death penalty became legalized lynching. This is reported quite effectively in many books, articles and webpages. The U.S. has gone from the rope to the chair to the needle.

In a recent op-ed in the Tampa Bay Times, activist Derrick Jamison writes, “As a Black man in America, I know all too well what it is like to face an angry lynch mob. I spent 20 years on death row for a crime someone else committed.

“I had six death warrants and six execution dates in Ohio. All six executions were later stayed by the governor; the last came within 90 minutes of my scheduled execution. I was asked about my last rites, where my dead body was to be sent and what I wanted for my last meal. But my story ends differently than most. I am the survivor of what could have been a legal lynching. My story illustrates everything that is wrong with the death penalty.” (July 7)

This month’s federal executions are the culmination of over three years work securing a secret supply chain to make and test lethal-injection drugs within months of Trump becoming president.

From an extensive investigation released by Reuters on July 10, here is the timeline of when Trump began planning to resume executions:

With unemployment skyrocketing and a health care crisis gripping the country, workers need support to pay rent and mortgages, buy groceries and pay utility bills. In the richest country in the world, there should be no hunger or evictions or unaffordable health care.

On Feb. 10, Trump sent Congress a proposed Fiscal Year 2021 budget request of $740.5 billion for national security, $705.4 billion of which is for the Department of Defense.

This is OUR money, so this money should be used for the people. Expensive and unnecessary policies like executions should be immediately abolished.

After these recent executions by the Republican government, there was not a peep of protest from any of the so-called liberals like Bernie Sanders or Nancy Pelosi. Where is the outrage of the bourgeois media?

It is up to our class to make this country fit for all. Until the system is turned upside down, we must work to end racist practices of the cops, the courts and the prisons. We must stop all executions, which mainly target the poor and people of color.