In Texas alone, “75 of the state’s 104 prisons and jails do not have air conditioning in most inmate housing areas where temperatures often rise above 100 degrees in the summer.” The Texas Department of Criminal Justice spent $7 million fighting a lawsuit by prisoners demanding AC at the Wallace Pack Unit near College Station, where it would only have cost $4 million to do it. (Texas Tribune, March 21, 2019) The TDCJ also has a hard time retaining guards, who also cannot stand the heat behind the walls without AC.

Cruelty is often the point, as refusing to install air conditioning is a matter not just of short-term cost savings, but of appearing tough on crime. In 2014, the people of Jefferson Parish, La., only voted to build a new jail after local leaders promised there would be no air conditioning.

Benny Hernandez, an incarcerated man in Texas, told Prison Policy Initiative how torturous heat is in prisons: “It routinely feels as if one’s sitting in a convection oven being slowly cooked alive. There is no respite from the agony that the heat in Texas prisons inflicts.”

Health conditions, such as diabetes and obesity, as well as taking psychotropic or high blood pressure medications, can limit anyone’s ability to regulate heat. Older people are highly susceptible to organ failure in the heat. Prisons, jails and detention centers cage people who are vulnerable to heat precisely because of their conditions. Extreme heat is an enemy to health, especially when you are confined to a cage and especially during the COVID crisis 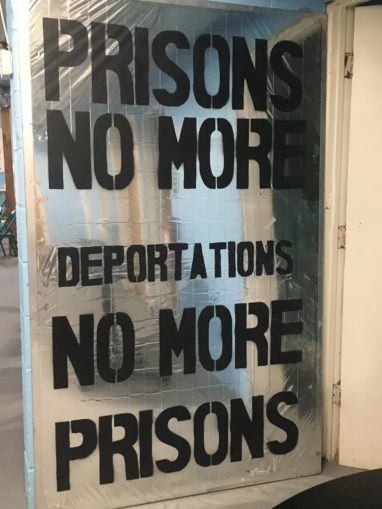 Im/migrants in detention are often given aluminum blankets, like the one in this graphic. WW Photo: Mirinda Crissman

Case numbers in the thousands

At least 48,764 cases of COVID-19 have been reported among prisoners. The data suggest that even these numbers may be underreported. Texas leads in the number of cases with 7,757, followed by the Federal Bureau of Prisons with 6,621 cases. Ohio, Michigan, California and Tennessee are right behind Texas and the BOP with 4,950, 3,991, 3,800 and 3,171 cases, respectively.

Over 600 prisoner deaths from the virus have been reported, with 91 from the federal BOP, 84 each in Ohio and Texas, 68 in Michigan and the rest in other states. Among prison staff, 10,342 cases and 42 deaths have been reported. (The Marshall Project, June 25; Texas Tribune, July 7)

Across the country, 658 youth in juvenile facilities and 771 staff members have reportedly been infected with the virus. (The Sentencing Project, June 24)

The dedication to punishment within the prison-industrial complex cannot be overstated. In its report “Solitary Confinement Is Never the Answer,” the Unlock the Box Campaign documents the impacts and risks associated with the 500% increase in the use of solitary confinement, which is the punitive way prisons have decided to respond to the pandemic.

Many prisoners granted parole are nevertheless stuck in virus-ridden facilities due to COVID-19-related and other bureaucratic delays. Across several states, prisoners are kept locked up because they were not able to start or complete classes required for release, even though having to stay inside these concentration camps for the poor may be a death sentence.

June 4-9 saw a hunger strike by detainees at Mesa Verde Immigration and Customs Enforcement Processing Center in Bakersfield, Calif. In a video shot by detainees and released through the Interfaith Movement for Human Integrity, detainees held up handwritten signs reading, “BLM,” “Change the System” and “Para la discriminación” (Stop the discrimination). One detainee explained, “We stand with the Black Lives Movement and against the system that took the lives of George Floyd, Breonna Taylor, Tony McDade and so many Black people.”

Asif Qazi, a detainee inside the Mesa Verde facility, explains: “ICE (Immigration and Customs Enforcement) always puts forth very inaccurate information … in order to discourage the cause of liberation. We’re doing this on our own … because of the recent deaths in ICE custody of Choung Woon Ahn and Carlos Mejia [not the famous Nicaraguan musician]. We are doing this because of ICE’s continuous lies in front of federal judges about how they have made it safe for us to be detained here during the coronavirus pandemic when it’s really not safe at all.”

“We here at Mesa Verde want to be safe and free. We want the Attorney General to investigate the situation inside our detention center during the pandemic that led to the deaths of our friend Mr. Ahn and also Carlos Mejia. Power to the people.” (Interfaith Movement for Human Integrity, June 8)

On June 27, a federal judge in Los Angeles ordered the release of migrant children who have been held longer than 20 days in any of the country’s three family detention centers, citing the coronavirus. The ruling applies to 124 children living in detention centers in Texas and Pennsylvania. Citing terrible sanitary conditions and rapid spread of the virus in these facilities, the judge is the first to give a specific deadline (July 17) rather than call for “prompt” release. The children will be released to designated relatives in the United States upon parental designation. (NY Times, June 26)