These slightly edited remarks were given at a July 9 Workers World Party webinar on “Introduction to Revolutionary Deep Organizing.”

There is a medical definition for “inoculation”: a set of methods of inducing immunity against various infectious diseases. The capitalists inoculate people against unionization. So what does it mean for us in the context of the class struggle? What are the potential infections, and where and who do they come from? How do we inoculate ourselves and our constituents from these dangers that can impede the struggle?

As it is medically, inoculation is basically preparation for the hazards we face. What kinds of preparations are needed to inoculate against defeat and to win against capital? And how has today’s labor movement failed in this area? That’s a factor in a series of defeats for workers, resulting in givebacks and concessions — even now, when the wealthy class is richer than ever and can easily afford to meet our demands.

There are great examples of class struggle unionism, of left-led unions in history which engaged and prepared the rank and file for fierce class battles. We can learn a lot from the 1930s, from the Flint Sit-Down Strike of 1937, where communist leadership proved decisive.

There are some misconceptions about this historic strike, which began on Dec. 30, 1936, and ended on Feb. 11, 1937 — when General Motors agreed to do something it swore it would never do: recognize the United Auto Workers union. The big misconception is that the strike was a spontaneous event — that there was no preparation, that angry workers just stopped work and took over the plants. 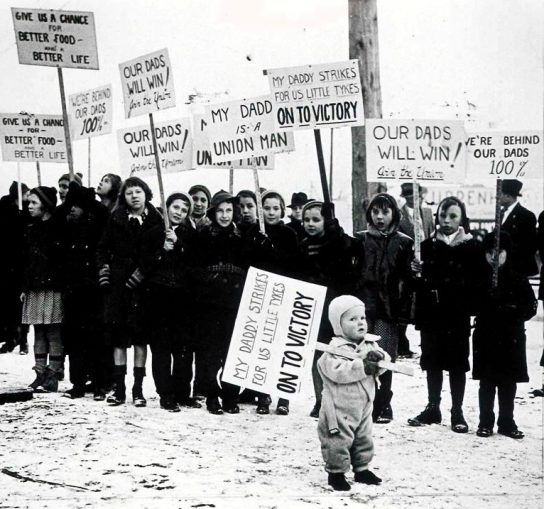 Flint Sit-Down Strike children’s picket line, Feb. 3, 1937. Not only the strikers inside, but their families, had to be ‘inoculated’ against GM’s intimidation tactics.

In fact, UAW Vice President Wyndham Mortimer, a member of the Communist Party, arrived In Flint, Mich., in June 1936, and immediately began preparing for a showdown with GM. He managed to get the addresses of GM workers and then mailed them weekly mimeographed letters.  They were smuggled into the plants and passed hand-to-hand down the assembly line.

Mortimer made house visits and phone calls, slowly signing up and building a nucleus of union supporters. He went out of his way to bring Black and immigrant workers into the organizing drive. And he held a secret meeting in a Black church by candlelight in the wee hours of the morning.

Regular meetings were held at the UAW headquarters in the Pengelly Building, where a number of left-wing parties also had offices. One of the educational leaflets discussed there was titled “What to do in case of a sit-down.”

UAW President Homer Martin, who was hostile to the left forces,, maneuvered to have Mortimer transferred out of Flint. But the replacement was Bob Travis, also a CP member, who had distinguished himself as a skilled organizer at a GM plant in Toledo, Ohio.

On Nov. 13, 1936, there was what union organizers deemed a “dress rehearsal.” Bud Simons, another CP member, was a union organizer inside Fisher GM Body Plant Number One. When management tried to cut the number of workers on a particular job — an example of the hated speedup, a major motivating force in the union drive — some workers began arguing with the foreman and stopped working for a short time, shutting down the assembly line.

The next day two workers came to work to find their time cards pulled. They had been fired. The foreman tried to fire a third worker involved in the dispute. All the workers in the area stood still.  They stayed inside the plant, but refused to work. Before production resumed, the worker who was still in the plant was not fired.  The other two workers were located in town and put back on the job.

This kind of preparation is inoculation against fear and intimidation. According to the law, the workers had the right to organize.  But in reality, GM was using the threat of being fired to keep the company union-free. Workers could be fired for the slightest offense. Union supporters wore their union buttons inside their shirt collars.

To overcome the fear, the workers had to feel their own power — the power to stop production — and win in a short skirmish with the boss.

All this was necessary to prepare workers to occupy the plants. Once the occupation began, Travis continued deep organizing among the workers, their families and the community to build strike support. He had a system of folders. One was for spouses — who proved instrumental in winning the strike through the Women’s Emergency Brigade and the Women’s Auxiliary.  Both were led by left-wing women. Another folder was for children, and another for school teachers.  One folder was for bus drivers, who were also on strike at the time. And so on.

Simons and Joe Devitt and Walt Moore, his comrades inside the Fisher Body plant,  were also key. Henry Kraus, the chief propagandist during the strike, wrote: “They were very good organizers, not only natural organizers. Part of their political training was organizational. You do these things; you have to. Communists are that way, you know. … You have to have a committee to do this and a committee to do that. Before you could say the word ‘go,’ they had everything on the way.”

This high level of class-conscious organizing helped bring the world’s largest corporation to its knees. This led to a whole slew of union victories after workers sat down in factories, stores, hotels, hospitals, restaurants and other workplaces.

Unfortunately, the kind of leadership that led the militant fights of the 1930s was driven out of most unions during the McCarthyite witch hunt. McCarthyism gained steam in 1949, after the victory of the Chinese Revolution struck fear in the hearts of the ruling class.

The union-busting Taft-Hartley Act, passed in 1947, had a clause that made it illegal for Communist Party members to hold elected union office. The

Congress of Industrial Organizations, which led the struggle in the late 1930s, was now led by Philip Murray, who embraced class collaborationism. All member unions were ordered to adhere to the Taft-Hartley stipulation. The 11 left-led unions which refused were expelled from the CIO.

The other unions embarked on a massive purge of CP members, as well as members of the Socialist Workers Party — even though Taft-Hartley didn’t apply to them. They also campaigned to have the left unions decertified through National Labor Relations Board elections and replaced with anti-communist unions.

Today, only two of the 11 radical unions have survived: the United Electrical Workers, which still upholds the model of rank-and-file driven unionism, and the International Longshore Workers Union, which shut down the ports all along the West Coast on Juneteenth. You can bet it takes a deep style of organizing to get workers to partake in that form of class struggle!

The working class is rising. Power to the workers and oppressed!