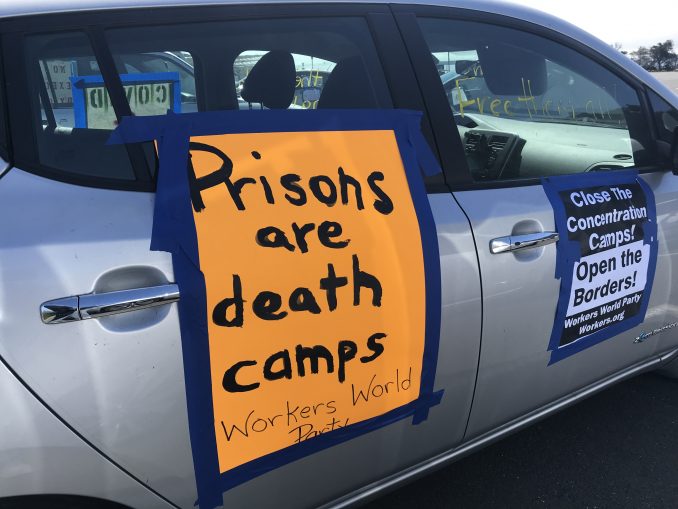 July 5 — After a large prisoner transfer to San Quentin State Prison dramatically increased the COVID infection rate there, prisoners and advocates have stepped up their campaign to win the release of thousands of elderly, ill and vulnerable people inside.

COVID-19 infections are spiking at astronomical levels in overcrowded U.S. prisons, jails and detention centers. The California Department of Corrections and Rehabilitation ranks at the top of the list for callous and reckless endangerment of prisoners’ lives.

As of July 2, more than 1,300 prisoners at San Quentin tested positive for COVID-19 — about a third of the facility’s population. A jump in the number of cases directly followed the CDCR’s decision to move more than 121 prisoners from the California Institution for Men in Chino at the end of May. CIM at the time had over 500 reported cases of COVID-19 and at least 15 COVID-related deaths. Over 16 of the transferred prisoners tested positive for the virus.

Spurred by this human rights crisis, two Bay Area coalitions have been working overtime to put pressure on Gov. Gavin Newsom to begin releasing large numbers of prisoners. The coalition No Justice Under Capitalism is fighting for the lives of prisoners during COVID-19. Efforts led by the Ella Baker Center and Re:Store Justice also include the participation of people inside.

On June 27, the latter coalition sponsored a Day of Action outside San Quentin to present the “Demands of The Incarcerated Community”: “The only way to control the spread of this global pandemic (inside prison walls and beyond) is to grant releases, stop ICE (Immigration and Customs Enforcement) transfers for those released, and reduce California’s prison population.”

The demands also include an end to transfers, prisoner access to personal protective equipment and free tele-visiting privileges. In-person programs and visits have been shut down, severely impacting the lives of the people inside. A recent Sacramento Bee editorial called COVID-19 in prison a death sentence and urged Gov. Newsom to act immediately to save lives by releasing prisoners. ( July 2)

No Justice Under Capitalism put together two major car caravans. On July 1, the coalition brought the fight to Sacramento, the state capital, by organizing people to make public comments, in person and virtually, at the California Senate hearing on the COVID pandemic in the prisons.

On July 5, the group organized a car caravan to Gov. Newsom’s home in the small town of Fair Oaks outside Sacramento, with a rally in a nearby park. Prisoner rights advocates, allies, former prisoners and family members spoke out against the governor’s refusal to grant large prisoner releases in response to the crisis.

Both coalitions are continuing their campaigns to stop the deaths of prisoners due to COVID-19, medical neglect and unforgiving incarceration. The “Demands of The Incarcerated Community” are being circulated through Twitter and social media, including the slogan “Incarceration should not be a death sentence.” (#StopSanQuentinOutbreak)