Kadesh Anderson is a Black Lives Matter activist and journalist in Leeds, England.

Leeds, England — On June 21 in Hyde Park, over 5,000 people came out in solidarity with the Black Lives Matter protest.

With social distancing measures in place, people came together with their banners and posters in hands, shouting “Black Lives Matter.” The gathering included guest speakers and cultural performers who used their voices to touch the crowd and express their deep concerns about events happening in the Black community, both in Britain and worldwide, historically and currently. 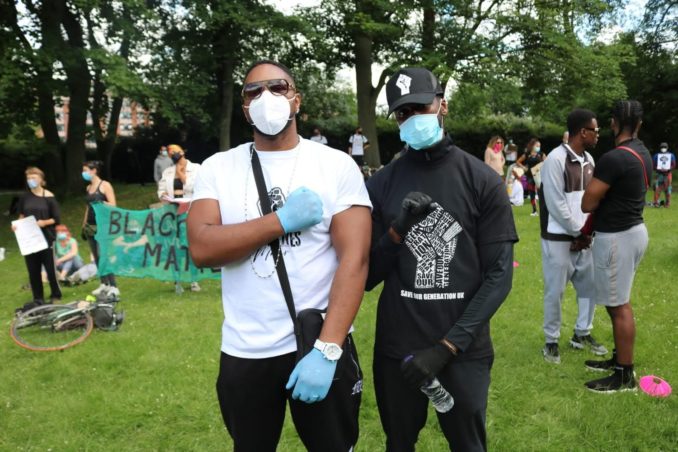 These protests were sparked globally after the death of George Floyd, who was   murdered on May 25 in Minneapolis, Minn. Officer Derrick Chauvin pressed his knee onto the neck of George Floyd for 8 minutes and 46 seconds.

Floyd repeatedly said, “I can’t breathe,” and in his final moments, as he realized he was dying, he called for his mother. The people who witnessed his death repeatedly yelled to the other officers, “He cannot breathe.”

This awareness brought to mind the conditions that ignited the “London Riots” from Aug. 6 to 11, 2011, and also bridged the struggles against racism and police brutality regularly faced by the Black community in Britain. The 2011 protests started in Tottenham, London, following the death of Mark Duggan, a local man who was shot dead by police Aug. 4. Several violent clashes with police ensued, along with the destruction of police vehicles, a double-decker bus and many homes and businesses, thus rapidly gaining attention from the media. The revolt spread to cities and towns across England.

One of the speakers at the June protest was Marvina Newton, co-founder of Black Lives Matter in Leeds, who stated: “When it comes to Leeds I have a duty to our community to gather and collect the voices and to amplify the amazing Black excellence we have in the city and use that as a stepping stone to challenge racism.

“We need it to build stuff on the back of our allies because racism was not created by us. It needs our white community to fix that problem. The Black community already can see the support that it’s getting.  What we need to do is do a lot of work to unite our community.”

We further discussed why she felt that Black Lives Matter is important to the people in Leeds. “Black unity matters, Black leaders matter and that’s what we need to do. We have leaders in every Black person in the city, and we need to start showcasing all the leaders because we can’t just assume that it’s one or two when we know that there are many of us. This is what today is about. It’s having some old faces but also having some new faces, because they are coming up strong.”

I also had an opportunity to speak with renowned poet, speaker, writer and activist Khadijah Ibrahim. She shared her thoughts about the Black Lives Matter movement and how it compared to the fight for equality that she witnessed as a child growing up.

“To be honest, for me as much as it’s a very welcomed movement and it’s a revolutionary movement in this time, I have been a part of activism for a long time — my writing is about activism. It’s about change. It’s about observing the time, talking about what’s happening in the present time as well as looking back.

“The Black Lives Matter campaign: That movement for me is a very welcomed movement, and I also have to remind myself and maybe remind people who are younger than me that this campaign and the hashtags are the same as the other campaigns. … So when my grandparents arrived here, their hashtag, if there was a thing as a hashtag back then in the late 50s/60s, would have been ‘Come what may, we’re here to stay.’ They would say, ‘Without us, there is no Britain.’ These were the hashtags of that time. We’re still addressing the inequalities of policies that exist and have existed for so many years, and we’re also addressing institutional racism.”

As the poet talked about the difficulties she faced in her time growing up, I recalled a discussion that I had with a 12-year-old boy who stated that going to the protest made him think about the racism that he has dealt with and will have to deal with as he grows older.

The resistance and solidarity are in motion. For the first time in U.S. history, there were Black Lives Matter protests taking place in all 50 states and across the world.

The struggle for justice, equity and equality continues.