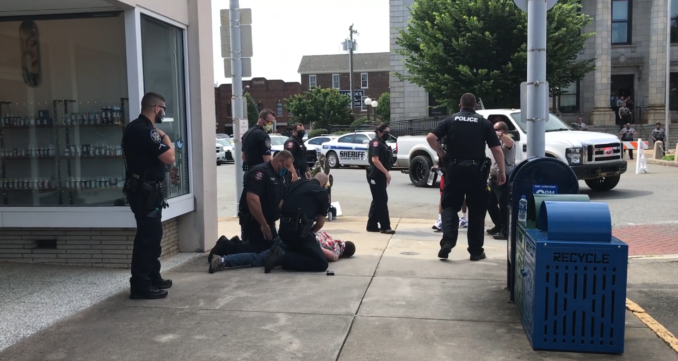 Alamance County sheriff and Graham Police make an arrest for holding a sign on county property.

Durham, N.C. — While the “second wave” of coronavirus has received much coverage throughout the U.S., North Carolina, under the brutal, totalitarian rule of  North Carolina Republicans, has barely slowed the outbreak’s “first wave” since March 10 when the state first entered a state of emergency.

North Carolina is a perfect storm of health crises. White nationalists seized control of the state apparatus in 2010 in an anti-Black insurgency against the election of a Black president. Since then, they systematically shuttered rural hospitals and urban public health initiatives, defunded medical research — especially around racial disparities in health care — and burned billions on corporate wealthfare and police militarization.  And while the workers have fought back and pushed back the racists, many options — such as Medicaid expansion — remain off the table.

So when the first reported coronavirus cases in the state emerged in early March, hospital visits and deaths for “influenza-like illnesses” had already been climbing, especially among Black, Indigenous and Latinx workers who were denied access to preventative health care.

The situation worsened after the state Department of Health first reported the degree to which coronavirus was disproportionately harming Black people. Within 72 hours, large mobilizations by white business and home owners to “ReOpenNC” took place across the state — mobilizations that included many known neo-Nazis, neo-Confederates and other designated hate-group members.  While many of the first “ReOpenNC” extremists have since contracted the virus, large amounts of untraceable funds have continued to prop them up, even in the face of Black-led uprisings.

Alamance County, situated between Greensboro and Durham, recently made national headlines for having the fastest time for cases to double in the entire U.S.  Alamance County is controlled by fascist Sheriff Terry Johnson, best known for being excluded from Immigration and Customs Enforcement’s deportation program by the Eric Holder Justice Department for racial profiling before being reinstated under the Trump administration.

Sheriff Johnson has pledged not to enforce masking laws, which reduce COVID transmission rates by 98 percent, but has enforced — and been sued for enforcing — a ban on #BlackLivesMatter demonstrations in public spaces in the county.

Further, while saying the demonstration ban was for public safety, Johnson refused to comply with laws disallowing events at the Ace Speedway — a site that has now become an infection cluster, as wealthy white enthusiasts infect Black and Brown workers throughout the county.

Alamance County is also home to Elon University, which notably “reopened” after the last day of exams, with no classes on campus, but forcing vulnerable dining hall, residence hall and facilities and other workers to leave their homes without personal protective equipment to labor in service of an inactive university. Elon also operates a private police force at Sheriff Johnson’s beck and call.

The future of North Carolina remains ambiguous, as a 2 a.m. vote by white supremacist legislators on June 26 has now ruled masks illegal — under a law meant to weaken the Ku Klux Klan in less openly racist times.  Other sheriffs are following Johnson’s pattern of selectively enforcing laws to maximize danger to Black people.

But whatever the future holds, North Carolinians will continue to struggle for  liberation in solidarity with movements around the world.