This is a slightly edited version of a talk given during the“What Road to Socialism?” webinar held by Workers World Party on May 16.

United Steelworkers Local 8751 has three advantages during this pandemic when going to work on the frontlines is a daily exercise in confronting the life-or-death realities of the class struggle. 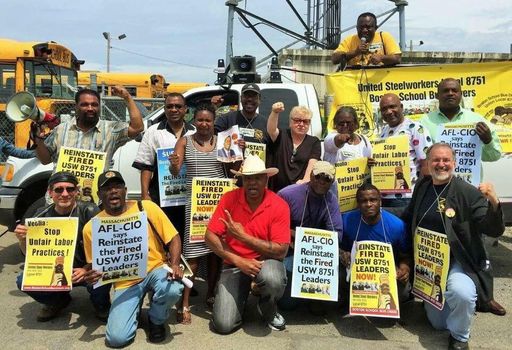 The founders of Workers World Party saw the fight against racism in this settler-colonial state as decisive to the global class struggle. When in 1974 racist mobs began a violent war targeting Black and Brown children on school buses, the party dropped everything to mobilize 25,000 antiracists to Boston on Dec. 14, 1974, and turned back the fascist mass mobilization. We decided to get jobs on the frontline and organize deep with the drivers.

The membership of Local 8751 is steeled from its birth in the anti-imperialist struggle. Our President Andre Francois and 90 percent of the drivers grew up battling U.S.-sponsored death squads in Haiti. Others threw the Portuguese out of their homeland, Cabo Verde. In February we studied what was going right in China, Vietnam and Cuba and what was leading to mass death in for-profit Europe.

Through battling racist mobs, 11 strikes against corporate bosses, and countless political and economic job actions, we’ve been dress-rehearsing in masks, helmets, gloves and implements of self-defense for 45 years. So when Mayor Walsh summoned us to City Hall March 12, we told him to shut the schools because we could not continue to drive 37,000 kids in unsafe conditions. The next day he shut the city.

When the Mayor said he needed some of us for emergency operations and the rest would go on unemployment, we told him in one voice, “Nobody drives unless we all get paid.” Based on our reputation for throwing down the keys, he ordered our obstructionist employer, Veolia Transdev, to sign a Full Pay & Benefits Agreement.

When thousands of stranded children couldn’t access food, our members — like millions of drivers at Uber, Lyft and Amazon Flex — were overnight thrown into the monopolized food supply chain

The spectre of mass hunger and unemployment is crashing Wall Street and bringing out armed fascists organized by Agriculture Secretary Purdue to “reopen the slaughterhouses” where tens of thousands of migrant workers have been sickened and murdered.

When, on the first day of the food-delivery program, the bosses tried to gather us inside without Personal Protective Equipment, the union channeled Samuel L. Jackson’s advice to “Stay the F Outside! or We Stay the F Home.” We forced reorganization of the operation outside into the parking lot, making the company spend thousands on a canopy tent and touchless restrooms and doors. Steelworker and Teamster security now commands the gate and various divisions of labor, safely distanced with loudspeaker communications. PPE is now available and required for all.

Union leaders, some of whom must stay home due to the pandemic’s risk factors, have developed new ways to struggle. We meet daily to share developments, hold Zoom meetings with allies and enemies, and plan next actions for the long-term. Instead of mass pickets, two geared-up militants with homemade signs and a camera at the gate recently stopped the entrance of a noncompliant boss.

After we celebrated Haitian Flag Day at 6 a.m. at the worksite on May 14, by midnight we had won back full pay for four Haitian and one Ethiopian drivers and their families. When the bosses, infected by class hatred, won’t make warning signs or publish Emergency Procedures, we do it ourselves and put them up when they rip them down.

We have just lived that proverbial “decade in a week.” In Local 8751, we have taken three deadly casualties and more are sick. But our theory and experience tell us that this could be the beginning of an “epoch in a season.”

Our lives and the future of humanity depend on a central question at this critical moment, “Where do socialists have the capacity to get deep in struggle with the workers on the front lines?” One example is in the precarious food supply chain where workers’ assemblies can prepare to take control of society — like Local 8751 aims to take control of our worksite.

With Trump, Wall Street and armed thugs in the streets this week threatening to reopen schools and everything else in a deadly gamble to recover their dead-end capitalist system, now hemorrhaging tens of millions of workers and in full blown crisis on life-support, Local 8751 is positioning and preparing for the next struggle to defend our lives and win a better world with the communities we serve: “The buses don’t roll till the Union says, ‘Go’!”

Gillis is a 35-year school bus driver in Boston, currently the elected Financial Secretary and Pension Plan Administrator for the 900-strong United Steelworkers Local 8751. He joined WW in 1984 after experiencing the party’s labor support for Jesse Jackson’s anti-racist campaign for president. Since the COVID-19 shutdown, Gillis has been a coordinator of the union’s frontline Emergency Health & Safety Task Force, which home-delivers food to thousands of children daily.