This is a slightly edited version of a talk given during the“What Road to Socialism?” webinar held by Workers World Party on May 16.

As the coronavirus continues to have a massive impact on people’s health and as some businesses have closed, there is a simultaneous crisis of the capitalist system itself. It is characterized by overproduction in major sectors of the capitalist economy, such as energy production and hospitality and transportation sectors. 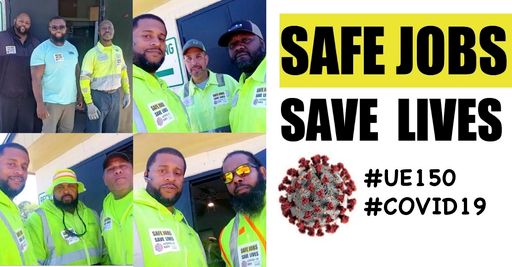 We are starting to see this spiral through the economy, which is having a major impact on tax revenues for local governments. As always, it is the working class that is taking the brunt of the hit.

Yet as workers are forced to work in dangerous conditions, there has been an  explosion of workers’ strikes across the country. There have been 200 wildcat workplace strikes related to COVID-19, including by football jersey workers who were converted to protective gear makers,  poultry workers, bus drivers, and Amazon warehouse, Whole Foods and other grocery workers. Strikes are occurring across all essential industries, as workers take their lives into their own hands.

Many auto, textile, meatpacking and other manufacturing plants are opening up without any written agreements with their unions or the workers. That means workers will be forced back into a dangerous environment, risking their lives. As of April 28, Workers’ Memorial Day,  61,000 people had died in the U.S. from this virus.

Yet Trump, after refusing to command industries to produce necessary health care equipment like ventilators and surgical masks, invoked the Defense Production Act to force the opening up of all meatpacking factories, no matter the risk to poultry, hog slaughtering and meatpacking workers across the country. They work in damp, cool environments that have proven to be major hotspots for infection and death.

On May 13, labor leaders honored the life of Celso Mendoza, an immigrant union leader, who died of COVID after warning his coworkers of its dangers. He had migrated from Veracruz, Mexico, and worked on the processing line at a chicken plant in Forest, Miss., for $6 an hour.

As of May Day, over 5,000 meatpacking and 1,500 food processing workers have been sickened by the virus, while over 20 deaths in these industries have been reported, says the Food and Commercial Workers (UFCW). (Since then, these figures have increased.)  The largest concentration of plants is in the U.S. South and Midwest.  In North Carolina, 982 workers have tested positive for COVID-19 at 20 meat processing plants in 12 counties.

The Southern Workers Assembly has launched a Safe Jobs Save Lives campaign to support the struggles of workers across the South to organize at the workplace with  calls for safety and power. We have concentrated on supporting workers in meatpacking plants and transportation sectors and lifting up their struggles.

Bus and transit drivers have taken part in workplace actions, including strikes during this period. In New York City, 98 transit workers died as of May 1.

A video recorded by Detroit bus driver, Jason Hargrove, calling out a coughing passenger on social media, has been transformed into a TV ad calling attention to the toll the virus is taking on Black people.  Hargrove died of COVID-19 11 days after he recorded the video.

The SWA has been in touch with striking bus drivers in Birmingham, Ala. Gregg Roddy, president of Amalgamated Transit Union Local 725, spoke on SWA’s recent webinar about the drivers’ successful job action. Elsewhere across the South there have been transit strikes in Richmond, Va., and Greensboro, N.C., as well as many other cities.

One thing that these two industries — meat processing and transit  — have in common is that their workforce is overwhelmingly made up of Black and Brown workers.  More than half of all meatpacking workers are Latinx. About 30 percent of the country’s  transit operators are Black and 14 percent are Latinx, according to U.S. census data. Sixty-five percent of them are over 45 years old, and 15 percent are older than 65.

The Southern Workers Assembly promotes a slogan, first stated by Sam Marcy, the late chairperson of Workers World Party: “If you have a union, fight to make it fight. If you don’t have a union, fight to get one!” That is what we are doing across the South. This includes helping to build citywide solidarity structures, such as local Workers’ Assemblies. These can help give workers space to speak bitterness, but also to help them see their own struggles against their bosses are part of a larger fight against the capitalist system.

Strobino (he/him) is an International Representative for the United Electrical Workers (UE) and has worked with the North Carolina Public Service Workers Union, UE Local 150 for over 15 years. He is on the Coordinating Committee of the Southern Workers Assembly and a member of the Durham branch of Workers World Party.