Incarcerated workers at the largest prison in Bolivia staged a mass uprising on May 11, demanding freedom and protesting dangerous conditions exacerbated by the COVID-19 pandemic. The rebels chanted, “We want to live!” and “This is not a riot, this is a fight for life!” 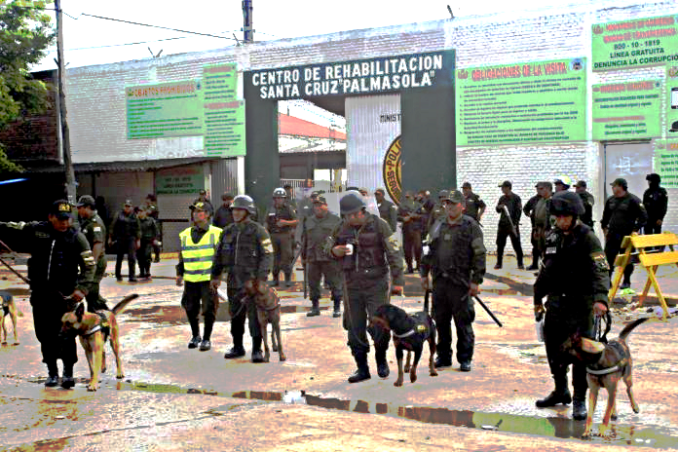 Police mounted a repressive presence on May 12 at Palmasola, a major Bolivian prison, as incarcerated people protested inside. Credit: El Nacional

Two prisoners have already died from COVID-19, and hundreds more have been exposed. The incarcerated workers held in this prison camp say that no precautions have been taken to help stem the spread of the deadly coronavirus. The prison is located in Santa Cruz, the epicenter of the viral outbreak in Bolivia.

The Centro de Rehabilitación Santa Cruz, known as “Palmasola,” is a maximum security prison complex where incarcerated workers and their families are encamped within a heavily guarded perimeter. According to teleSUR, the housing capacity at Palmasola is 800 people, but there are currently 6,000 people there.  (May 12) Entire families are held at Palmasola, with hundreds of children under the age of six living inside the camp. Police who guard the facility are notoriously corrupt, and bribery in exchange for goods and housing is commonplace.

In 2013, violence broke out at the facility, leading to the deaths of 31 people. The deaths were blamed on gang activity, but the conditions themselves in this densely populated concentration camp for poor and oppressed Bolivians should be considered the primary cause.

Last year a U.S.-backed, right-wing coup overthrew the democratically elected government of Evo Morales, the first Indigenous leader of modern Bolivia. Morales’ social-democratic government was one of the few remaining “Pink Tide” administrations whose tenure brought about a massive increase in Indigenous sovereignty, standards of living and autonomy over Bolivian resources and production.

Since the fascist takeover in November 2019, Bolivians have protested against the coup government and its rollback of social reforms. The illegitimate right-wing administration of Jeanine Áñez has completely failed to protect Bolivians from the coronavirus. Morales is currently in exile in Argentina, where he has been granted political asylum.