May 11— In the early afternoon of Feb. 23, shots rang out on the tree-lined streets of Satilla Shores, a predominantly white neighborhood bordering the port city of Brunswick on Georgia’s Atlantic coast, some 40 miles north of Jacksonville, Fla. 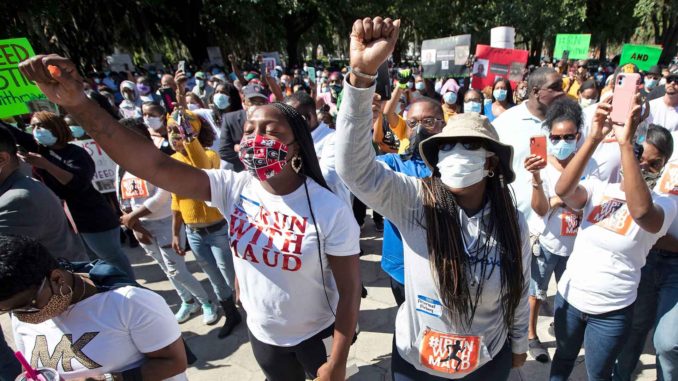 His killers, the father and son duo of Gregory and Travis McMichael, claimed they had identified Arbery as a “burglary suspect” as he jogged by their homes. They took off after him in a pick-up truck to make a “citizen’s arrest.”

Armed with a .357 magnum revolver and a shotgun, with the son driving and the father standing in the pick-up bed, they passed Arbery and then stopped to confront the runner in shorts and a T-shirt. Arbery tried to evade them, but Travis stepped o

ut of the truck and approached him in front of the vehicle, shotgun in hand. Confronted by two armed white men, Arbery tried to defend himself and get away.

These events are now known — more than two months after Arbery’s murder — because a video recorded by accomplice William “Roddie” Bryan, who helped trap Arbery with his vehicle, was finally released to the public on May 5. Later it was revealed that the video had been in police and prosecutors’ hands early in the investigation.

Within hours of public viewing, online petitions demanding “Justice for Ahmaud” were signed by tens of thousands of people. In the midst of the COVID-19 shelter-in-place order, a press conference was held by Black community organizations, including Brunswick pastors and the local NAACP chapter. These called for the McMichaels’ arrest and the resignation of Brunswick District Attorney Jackie Johnson and others who had failed to arrest the two.

The hashtag #IRunWithMaud, initiated by Arbery’s high school football coach and a cousin, encouraged those in solidarity with Ahmaud and the Arbery family to run or walk on May 8 for 2.23 miles to mark the young athlete’s 26th birthday that day and the date of his murder, Feb. 23.

The response was overwhelming, not just in the U.S., but around the world, as well-known professional athletes and outraged people, young and old, took pictures and videos of themselves with the hashtag. National Football League stars, including Malcolm Jenkins, Cam Jordan, Shaun Alexander, Mark Ingram, Julian Edelman and Tom Brady, expressed support for Arbery by signing a letter from the NFL Players Coalition to U.S. Attorney General William Barr, demanding a federal investigation.  National Basketball Association players, LeBron James and Steph Curry among others, have also demanded justice for Arbery.

Hundreds rallied May 8 outside the Glynn County Courthouse in Brunswick. Though glad that the McMichaels had been arrested the previous evening by members of the Georgia Bureau of Investigation, the crowd was furious that local officials had done nothing for over 10 weeks to take action against yet another murder in Georgia’s centuries-long history of white supremacist lynchings.

In a May 9 Los Angeles Times article about the rally, John Perry, senior pastor of Mt. Sinai Missionary Baptist Church and NAACP chapter president, said one reason for the delay was because the McMichaels had ties with local law enforcement officers and prosecutors — connections that allowed them to evade the law: “At the least, [law enforcement] gave them the benefit of the doubt; at the worst, they tried to help them to cover up an incident that was clearly murder. There is this whole relationship of privilege that we’ve got to address in our legal system and our law enforcement system.”

The father, Gregory McMichaels, had been a Glynn County police officer for seven years and then an investigator for the Brunswick District Attorney’s office for over 20 years, retiring in May 2019.

Long-running, controversial DA Jackie Johnson instructed police to not arrest the McMichaels, according to Glynn County Commissioners. After a few days, she finally recused herself because of her work relationship with Gregory McMichaels. Johnson has been under scrutiny for other cases where the DA’s office appears to have collaborated with the Police Department to cover up officer misconduct.

On Feb. 27, Johnson officially turned the case over to Waycross DA George Barnhill Sr.  But three days before getting jurisdiction, Barnhill had already advised Brunswick detectives that the shooting was a “justifiable” homicide as a case of “self-defense” because Arbery was a ”burglary suspect” and the pair were attempting a “legal citizen’s arrest.”

In another instance that exposes how tight relations are among members of law enforcement agencies, Barnhill’s son works in DA Johnson’s office. The senior Barnhill finally stepped down after several weeks of inaction, and a third district attorney was assigned the case.

Tom Durden, DA of Hinesville, Ga., took over on April 14. After the video release on May 5, he announced he would convene a grand jury to hear the evidence. But, he added, because courts were shut down due to the pandemic, this would not happen until at least June 12.

But, as pressure from the Abery family and the public mounted, Durden finally had to request the help of the GBI. On May 7, within 36 hours of examining the evidence already in hand, including the video, the GBI arrested Gregory and Travis McMichaels — some 78 days after Ahmaud Arbery was shot and killed.

On May 11, due to the international outcry, Georgia’s attorney general appointed a fourth DA, Joyette Holmes, as special prosecutor in the Arbery case. Holmes, who is African American, is the district attorney of Cobb County, Ga.

Arbery’s family expressed relief at the arrests, but voiced fear that the legal system will acquit the killers despite the evidence — as has happened in the cases of so many other young Black men, like Trayvon Martin and Tamir Rice.

The Black community of Brunswick — which is the majority of the city’s population — have suffered the inequalities of poverty, racism and disenfranchisement for generations. They know well that the battle for justice is not over.

Only continued pressure and organizing offer the possibility of a measure of justice under the legacy of institutional racism and white supremacy.