A timely international webinar, sponsored by SanctionsKill.org on May 9, featured representatives from Cuba, Iran, Nicaragua, Syria and Venezuela, plus a statement from Zimbabwe addressing the deadly impact of U.S. sanctions during the COVID-19 pandemic. Over 1,000 people from nearly every continent, including multiple U.S. cities, viewed the event. The United National Antiwar Coalition hosted the event, which Popular Resistance streamed, providing over 4,000 additional views. 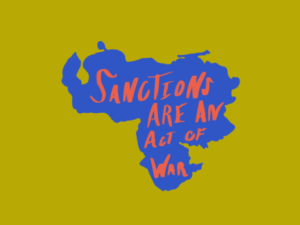 During the coronavirus crisis, the U.S., with the highest global death count, has cruelly intensified sanctions and military threats, effectively weaponizing COVID-19 to bring about regime change in countries whose governments refuse to follow the dictates of Washington and Wall Street. Criminal U.S. sanctions are officially imposed on 39 countries — over a third of the world’s population — and colonized Puerto Rico through the Jones Act. The sanctions deny access to medicine and medical equipment vital for fighting COVID-19, as well as to world markets for food and other necessities.

While the U.N. has called for loosening of sanctions, and several countries, including many U.S. allies, have defied them and sent medical aid, it is more critical than ever that people in the U.S. strongly denounce the sanctions, which are essentially acts of war.

‘Sanctions are a declaration of war’

Chargé D’affaires of the Cuban Mission to the U.N. Ana Silvia Rodriguez Abascal opened the program, noting that she has lived all her life under the economic blockade imposed by the U.S. on Cuba in 1962. “An array of restrictions and laws have been signed over the years, strengthening the blockade,” she explained, “but over the last year the very aggressive policies of the current administration have damaged the economy by intentionally targeting hotels and the tourism industry and restricting flights to Cuba.”

Abascal described how sanctions have escalated during the COVID-19 crisis, preventing shipments of fuel, medical equipment and other supplies necessary to address the pandemic. “Multinationalism and anti-imperialist solidarity are essential to counter the blockade.”

A statement from Dr. Frank Guni, Secretary for Administration, ZANU-PF North America, was read by Omowale Clay of the December 12 Movement. Guni explained that the struggle for independence from imperialism was focused on returning land in Zimbabwe to the people. “For the West this was an insult — that the Zimbabwe people dared to take their land back, so the U.S. set about to destroy our economy. President Clinton was instrumental in cutting off our country from the international trade and development fundamental to growth.”

Guni noted that due to prior experience in dealing with natural disasters and epidemics, Zimbabwe has been able to limit the impact of COVID-19. “Our only ‘crime’ is that the Zimbabwe government wants to determine their economy and development. … Sanctions are a declaration of war — a war we must win.”

“While the U.S. sanctions have impacted our health care system and ability to deal with COVID-19, Nicaragua’s model public health care brigades, social distancing, contact tracing and border control agreements with Honduras and Costa Rica have limited the spread.” Campbell concluded, “Cuba, China and others are providing assistance, and we are confident that the indomitable spirit and determination of the Nicaraguan people will prevail.”

Syrian Ambassador to the U.N. Dr. Bashar Ja’afari stated, “We suffer from too many viruses — some human, some not. Economic sanctions and regime change efforts through military intervention and imposition of sanctions have left humanity suffering. COVID-19, an extraordinary circumstance that requires unification of international, regional and national measures, poses new challenges to the Syrian government.

“The central bank of Syria is unable to access our own funds, frozen by sanctions and U.S. pressure on international banks. … The sanctions amount to health terrorism, on top of political, economic, financial, media and military terrorism by the U.S.,” Ja’afari said. “In March, U.N. Secretary General António Guterres called for the lifting of sanctions, but since then all initiatives and draft resolutions have been infiltrated by the West.”

Iranian Ambassador to the U.N. Majid Takht-Ravanchi addressed the negative impact of sanctions on his country’s ability to fight COVID-19. “The disease spreads like wildfire and the continued sanctions undermine our ability to fight it. Iran is experiencing one of the worst outbreaks of the virus, despite the fact that Iran’s medical facilities, doctors and nurses are among some of the finest in the world, as recognized by the World Health Organization.

“U.S. officials claim that humanitarian and medical needs are exempt from sanctions … but several countries that supplied medicines and equipment to fight COVID-19 have stopped shipping to Iran because the sanctions make it impossible. … We need to be able to fight COVID-19 without any hindrance.”

Venezuela’s Vice Minister of Foreign Affairs Carlos J. Ron Martinez called for countries undergoing sanctions to come together to challenge the U.S. Martinez described U.S. aggression, including sanctions dating back to 2006, but escalating under the current administration, and the recent failed military attack.“We have received multinational solidarity from Cuba, China, and Russia, and the WHO, which has provided insulin, test kits and supplies. Venezuela today is the country in this region which has carried out the highest number of tests — 6,000 per million inhabitants — surveyed over 19 million people, and sent teams of 11,000 doctors to visit homes.”

In the final question-and-answer period, Martinez called on global movements to challenge the validity of sanctions which have become accepted policy. “We are in the middle of something as tragic as this pandemic and still there are U.S. lawmakers defending the use of sanctions. There has to be a political cost, not just criticism. … These policies destroy the economies of nations for years to come and effect whole populations. … We have to end this culture where regressive measures are acceptable as foreign policy.”