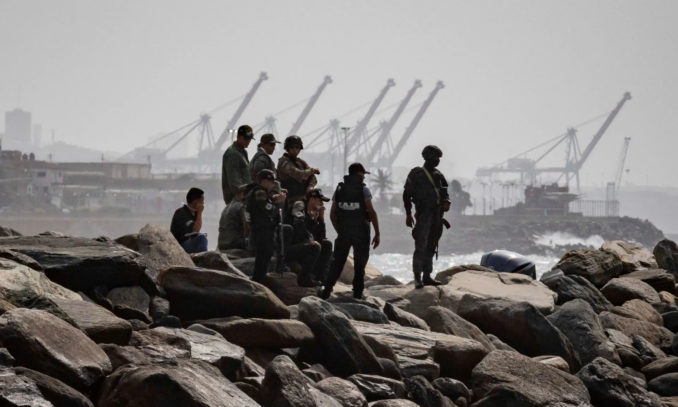 Authorities patrol the coast where an alleged confrontation took place in Macuto, La Guaira, Venezuela, on 3 May. Photograph: Rayner Pena/EPA

Workers World Party strongly condemns the attempted invasion of the sovereign country of Venezuela and planned attacks on its leaders by mercenary forces from Colombia in league with the U.S. government.  WWP expresses our solidarity with the Venezuelan people and their government, headed by President Nicolás Maduro.

The Venezuelan government foiled an attempt on May 3 by mercenaries to enter Venezuela on speed boats from Colombia and to commit terrorist attacks within the country.  The group from Colombia arrived on a beach in La Guaira, a port city approximately 20 miles from Caracas, early Sunday morning.

As reported by Telesur on May 3, among items Venezuelan authorities seized from the mercenaries were 10 rifles, two machine guns, one glock, six trucks, one boat with two outboard motors, cartridges, satellite phones, uniforms and helmets marked with the U.S. flag.

Venezuela’s Minister for People’s Power, Justice and Peace Nestor Reverol said, “They tried to carry out an invasion by sea, a group of terrorist mercenaries from Colombia, in order to commit terrorist acts in the country, murdering leaders of the revolutionary government.”

President of the Venezuelan Constituent Assembly Diosdado Cabello said the terrorist attempt is still under investigation with the help of the Bolivarian Navy. He stressed that the attack was a coup attempt funded by the United States, its Drug Enforcement Administration and the government of Colombian President Ivan Duque. Cabello stated that among the terrorists arrested was a U.S. DEA agent.

In a statement issued by the Bolivarian National Armed Forces, Venezuelan Minister of Defense Vladimir Padrino said:  “We maintain the search for any terrorist element or cell that wants to disrupt national sovereignty and independence, be it by air, sea or land.  We are determined to defend Venezuela, and we declare ourselves in permanent rebellion against imperialism and those who dare to damage national sovereignty.”