Because China is the most populous country in the world, and also the first to become infected with the COVID-19 virus, it is revealing to revisit from time to time the statistics on the epidemic’s progress there, compared to what is happening in the U.S.

What can we learn from the way the People’s Republic of China has handled this virulent disease? 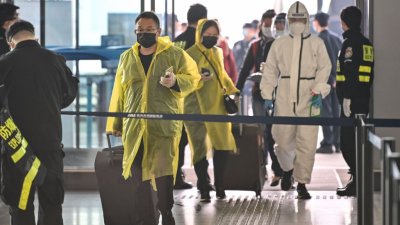 Passengers in protective wear arrive at Tianhe Airport after it was reopened in Wuhan in China’s Hubei province on April 8.

This huge disparity becomes even more startling when seen as a proportion of the overall population. Per million people, the U.S. has had 67 deaths. China has had 2.

While it is possible there could be a resurgence of the epidemic, China’s success until now in handling this extremely dangerous, and now worldwide, outbreak should be studied and give inspiration to all those fighting the disease. In this country, however, it is totally ignored. China is mentioned only as the source of the problem, never as an example of how to confront it.

The big difference comes from the way the economies of these two countries work.  Profits for capitalist owners are the driving force of the U.S. economy. What happens to workers who lose their jobs becomes a problem for local and state governments, but mainly for the workers themselves.

The coronavirus in the U.S. has upended everything from the stock market to local businesses to employment. No one knows how long it will take for life to return to any degree of normalcy.

On March 27, Congress passed a $2.2 trillion “economic stabilization package.” Some $877 billion was set aside for loans to businesses. Of the rest, direct payments of $1,200 would supposedly go to millions of people earning up to $75,000, with an additional $500 per child under 16.

Many, many people are out of work. They need money now to buy food, pay rent and utilities.

Have you seen any of that money yet?

But Chinese city of Wuhan, the epicenter of the disease, has been  reopened, as of April 8. Foreign Policy magazine wrote on March 25: “After two months of a near-total lockdown in many parts of the country, China seems to be getting back to business, with important indicators like electricity and steel demand and auto manufacturing returning to levels not far from normal.”

China has allowed some capitalist ownership, but its foundation remains a planned economy that is controlled by the Communist Party based in the working class. That’s the big difference underlying China’s achievements in dealing with this dreadful disease.