This article is for the thousands of young people who supported Bernie Sanders and for the social organizations that came out for Sanders, some endorsing a presidential candidate for the first time. It is for the thousands of nurses leading the way in the fight for Medicare for All and for all those seeking a more progressive agenda for this country. 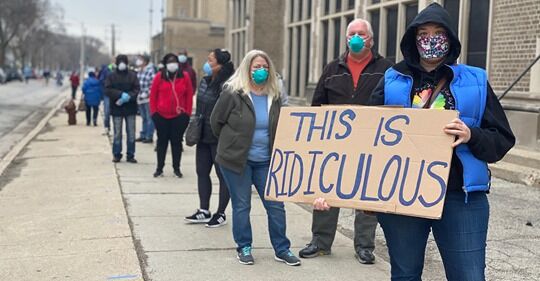 On April 8, presidential candidate Senator Bernie Sanders withdrew from the 2020 election. For thousands among his base, it must have been a painful day. Activists who identify as democratic socialists like Sanders must have been disheartened.

For young Sanders supporters facing one existential crisis after another, a loss of hope in the political arena that is the bourgeois elections is probably no small thing.

Among the revolutionary left, it is another matter.

There are no uniform views among communists in the U.S. toward the candidacy of Bernie Sanders. There are communists who historically and consistently vote Democratic, while others in the left consider this a class betrayal.

The Democratic Party is seen by revolutionary socialists as the party of the bosses, one that defends the interests of the capitalists just as the Republicans do. At times it may have a more liberal program and a more diverse social base, but historically the Democratic Party functions more as a brake on the struggle than as a defender of the interests of the people.

The danger is that the Democrats are closer to the masses than the racist, reactionary, super-rich Republicans.

For example, when the vicious police beating of Rodney King led to a righteous rebellion in Los Angeles in 1992, it was the Democratic Party leaders and allies who came out in sympathy for King, yet criticized the rebellion. The left cheered the expropriation of goods as a righteous act of justified reparations and supported the rebellion. The Democrats called it “looting” and “riots.”

Not everyone on the left agrees that voting for a Democrat is the “lesser of two evils.” Evil is still evil even if it might look like you and smile at you. There is ample evidence to demonstrate that, despite some differences, both parties unite to defend the capitalist system and not the workers and oppressed.

Countless imperialist wars prove their allegiance to the capitalist class. Just ask the Iraqis if a Democrat in office made a difference.

Capitalism at a dead end: A democratic socialist arises

In both 2016 and 2020, running as a democratic socialist, Sanders got attention and rose not only in popularity but in fact got airtime. Though never as much as Trump did in 2016 when CNN covered Trump rally after rally.

Sanders gained momentum without having to tap into corporate money, a monumental feat considering the millions spent to buy the elections. It was understandable that democratic socialists by the thousand-fold, as well as others, supported or gave critical support to his campaign.

Why did Bernie rise? More than any other reason, it was the material conditions of capitalism that propelled him to come forward. The economic crisis — which is in an acute freefall today — meant more unemployment and underemployment, no affordable education, foreclosures and skyrocketing health care costs.

The war on migrants took one ominous turn after another as racism toward Black and Brown people continued unabated. In fact, racism intensified, and white supremacy acquired a supreme place in society as the Trump administration right-wing zealots enveloped the White House.

So why did the most progressive candidate — the one calling for Medicare for All, for cancelling student debt, and the one who believes in climate change — get defeated?

The answer lies in the Democratic Party itself — and in Wall Street.

On April 9, USA Today wrote: “[S]tocks rose Wednesday after … Sanders dropped out of the Presidential race. Many investors feared a Sanders nomination … because of his policy proposals on health care and the economy, which analysts warned could crimp profits at insurers and other companies.”

Wisconsin: ‘A day that will live in infamy’

“It’s not going to be a safe election. People are going to get sick from this,” said Brook Soltvedt, a 60-year-old in charge of running a polling place in the April 7 primary in Madison, Wis. (Portside, April 7)

Wisconsin has been ground zero for many reactionary policies, including union busting and so-called welfare reform. But it was also the scene of a heroic battle in 2011 when people occupied the State Capitol for several days. Even as progressive forces mobilized for the April 7 election and even though public health officials called for a postponement because of the pandemic, the right-wing State Supreme Court ordered that the election proceed.

Absentee ballots had to be postmarked Tuesday or returned by 8 p.m.

Wisconsin is another sign that the reactionary right wing of the bourgeoisie, manifested currently through the Republican Party, has moved more and more to position itself to deny even the most basic rights to the masses. The movement must be on guard: The chicanery in Wisconsin may foreshadow events in November. Trump is openly stating he opposes mail-in voting because it benefits his opponents.

Black people and women fought like hell for the right to vote. Black people in particular died for that basic democratic right. History has shown that it is mass struggle that creates real change, not elections. But every basic right that workers have won must be defended.

Rights are being hammered, from the right to vote in a pandemic to the right to an abortion, education, a home, a job — and especially the right to live, as COVID-19 destroys communities, particularly communities of color.

And now Sanders, at a high level in the government, with a social movement behind him that could have helped to delay these attacks, has withdrawn.

On April 12, 1964, exactly 56 years ago in Detroit, Malcolm X gave one of his most inspiring speeches ever: “The Ballot or the Bullet.” He asserted that liberation cannot be won through the ballot box; it can only be won through our struggle.

A lot has happened since then, including Malcolm’s assassination. What has not happened is revolutionary fundamental change that makes the ballot box as irrelevant as an 8-track cassette player.

But what has happened is anti-capitalist sentiment has become more mainstream, something the Democratic Party machine is completely threatened by.

At the very moment that the Trump administration criminally mishandles the COVID-19 crisis to the detriment of the masses, the Democrats prefer to put forward a pathetic candidate. Joe Biden’s record on racism, sexism and imperialist wars is despicable. The line of least resistance — Biden’s electability — was preferred over the life-and-death issues that the Sanders’ movement was fighting for.

The Democratic Party is incapable and unwilling to fight the fight.

Which way then towards socialism? In the context of what could be an economic crisis worse than the Great Depression, socialism must be desperately fought for if humanity is to survive.

The only way to defeat white supremacy, COVID-19 and all the reactionary rest is to remember Malcolm’s words and put them into today’s context: people power, mass resistance, general strikes, occupations, door-to-door organizing when that is safe — these are what make real change. When the workers are struggling and developing class consciousness, this is what will stop the zealots in the White House and the fat-cats on Wall Street.

In 2016, a Chicanx actor took the stage during the Democratic Party Convention and said, “We did not cross the border, the border crossed us.” This year at a Sanders event in San Antonio, Texas, a Black actor closed his speech with the Assata chant spoken at many Black Lives Matter and other revolutionary events.
While deeply moving, it is tiring to have these slogans— developed in the streets — co-opted by the very party machine that is not only complicit in, but completely loyal to the capitalist system.

The revolutionary socialist movement should embrace the young people and others who wanted to see “Tio Bernie” win. We should hold them close because, together, we can create a new future: Real socialism will be just around the corner.