Traffic around Philadelphia City Hall came to a standstill for over an hour April 9 as hundreds of protesters, from social distance in their cars, demanded Mayor Jim Kenney and First Judicial District Judges Patrick Dugan, Leon Tucker and Idee Fox decrease the number of incarcerated people in the city’s jails. 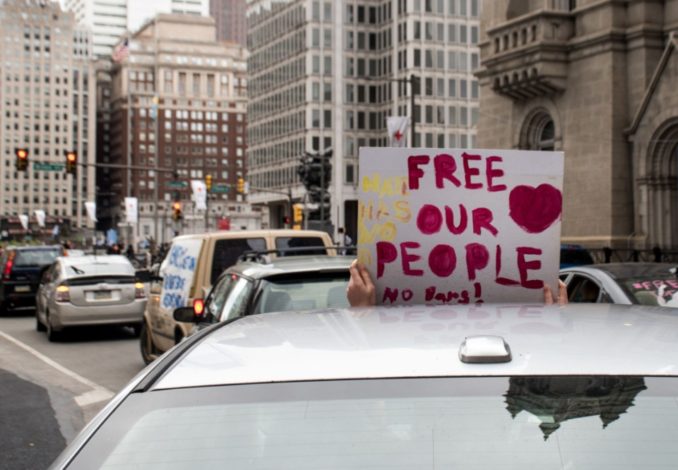 A Philadelphia car caravan moves to free prisoners during the pandemic, April 9.

Just days after being bailed out by the Philadelphia Community Bail Fund, Luz Acevedo said over a sound system: “I don’t think we should die in jail like animals die in cages,” referring to prisoners’ high risk of death from the COVID-19 pandemic.

Over 75 drivers then moved to the city’s jail complex several miles away where a delegation of religious leaders held signs outside the stoney and rusted barriers, giving speeches and saying prayers. Protesters applauded by sounding their horns, hoping the more than 4,200 prisoners on the other side of the walls could hear them. 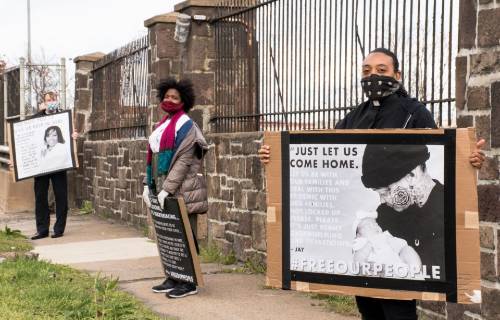 The #No215Jail Coalition is demanding the city release the vast majority of people jailed by granting parole, lifting detainers, ending cash bail, reviewing everyone in detention for possible release, and prioritizing release for youth, elderly people and people who are medically vulnerable.

— Caption and photos by Joe Piette