As jobs are lost during the COVID-19 crisis, an overwhelming majority of workers and oppressed people in the U.S. have been worrying about paying bills and feeding their families. At the same time, a major U.S. pharmaceutical company is poised to turn this suffering into a cash cow to boost corporate profits.

On March 23, using the 1983 Orphan Drug Act, the Food and Drug Administration promised pharmaceutical giant Gilead Sciences marketing rights for seven years for its antiviral drug remdesivir, seen as a possible treatment for the coronavirus. 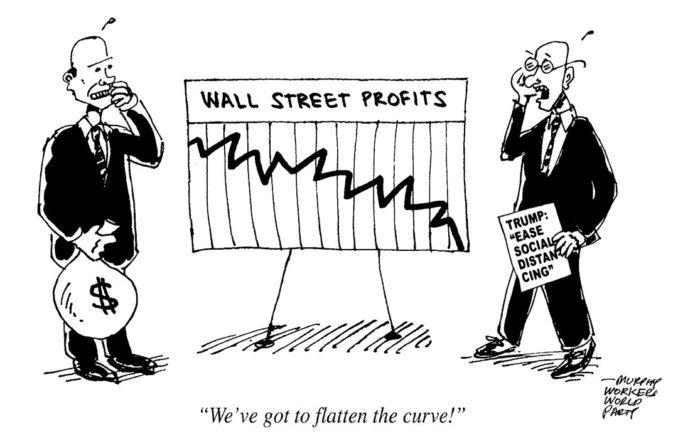 In using the rare orphan-drug status, the FDA granted this $22.5 billion corporation exclusive rights to profit from remdesivir production, while enjoying tax credits for research and development costs. Remdesivir had already received $79 million in U.S. government funding related to the 2014 Ebola outbreak in Africa.

Hours before the announcement, Gilead told the New York Times that “overwhelming demand” left it unable to fulfill requests for emergency access to remdesivir. After the FDA designation, Gilead’s stock price immediately shot up.

The orphan-drug designation was meant to spur drug companies to develop treatments for rare illnesses — those that impact less than 200,000 people. Fewer than 10 percent of rare-disease treatments get FDA approval. In 2018, the average price of developing an orphan drug was $98,000, compared to $5,000 for drugs without the designation.

The number of COVID-19 cases worldwide today is approaching a million.

While other companies are developing generic forms of remdesivir, the orphan-drug status would give Gilead sole access to U.S. markets, and patients would be prohibited from buying lower-priced generics.

Granting special status to Gilead may have been in reaction to the March 13 announcement that Cuba’s BioCubaFarma Business Group’s antiviral recombinant Interferon Alfa 2-B (IFNrec) has been successfully used in China to cope with COVID-19 in its early stages. (tinyurl.com/ur4sa4n) IFNrec was developed 40 years ago to treat AIDS.

Under intense public pressure, Gilead backed down. On March 25, the company announced it would ask the FDA to rescind the orphan-drug designation. But it can still raise the price and exclude people from this much-needed medicine.

Given Gilead’s history of over-pricing specialty drugs developed with government funds, it remains to be seen if this special status waiver will hold. There is also a question whether Joe Grogan, a former Gilead lobbyist now serving on Trump’s coronavirus task force, had a role in securing its “orphan” status.

In 2013, Gilead won FDA approval for a new antiviral drug, Sovaldi, with a 90 percent cure rate for hepatitis C, after acquiring the drug by taking over its developer, Pharmasset. Then Gilead raised the price to $1,000 per pill or $84,000 for a 12-week course. Few could afford it.

Shortly after procuring Sovaldi, Gilead introduced its successor, Harvoni, at $94,500 per treatment course. In some countries, generic versions of these drugs cost less than $1,000 for an entire course of treatment. In the 21 months after introducing the drugs, Gilead’s U.S. sales revenues soared to over $20 billion.

In December 2015, an 18-month federal investigation of Gilead concluded that Gilead had set the price of Sovaldi as high as the market would bear, so that it could charge even more for Harvoni. Research and development costs were not a factor.

Gilead’s price speculation resulted in heavy burdens for Medicare, Medicaid and the Bureau of Prisons, which were all limited by federal law in negotiating for lower drug costs. The result severely restricted access to the drugs for hep-C patients, whose lives depended on the new treatment.

The study determined that even though Gilead knew its exorbitant prices would deny treatment to millions and create serious financial burdens for Medicare and Medicaid, the company still went ahead. While shedding light on Gilead’s greed, the federal investigation offered no concrete action to stop it.