Reports in the media this week have shown that the U.S. Armed Forces — which are the core of the imperialist state power — are far from immune to the coronavirus. Both the U.S. Army and the U.S. Navy have been hit by the COVID-19 pandemic. And the hit has political repercussions.

Not only has the pandemic affected the bodies of the troops, the reaction of the Pentagon to this threat has begun to affect their consciousness. It has exposed the dual character of the rank and file of the U.S. Armed Forces: On the one hand, obedient troops are the enforcers for the empire of capital on a global scale; on the other hand, troops who resist reveal they are workers in uniform.

On March 26 the Army Times reported: “The Army’s top leaders say they are ramping up restrictions on soldiers as coronavirus cases increase across the force and internal memos acknowledge that Army policies so far have been ineffective in combating the pandemic. … Across the force, soldiers told Army Times this week they were concerned by their commanders’ decisions to continue to train and hold formations.”

The Business Insider ran a more general article discussing the COVID-19 situation on bases around the world. To summarize, few steps had been taken to provide “social distancing” — soldiers and sailors live close and work close to each other — and the availability of tests was no better than for U.S. civilians. Thus the pandemic was spreading rapidly and the soldiers were worried. (For details, see tinyurl.com/uvct2ca/.) 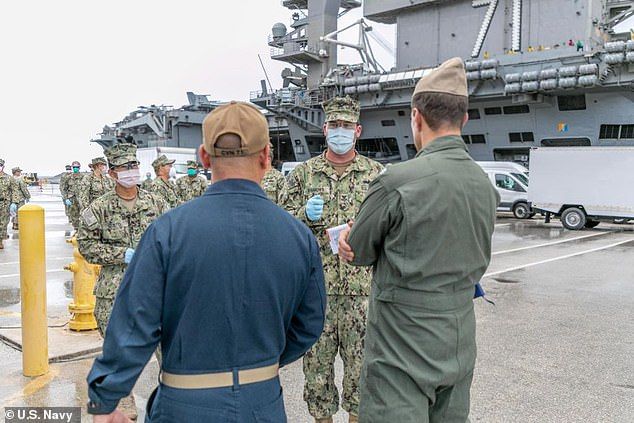 In the Navy, the reaction of the sailors on the Aircraft Carrier USS Theodore Roosevelt was even more dramatic. The ship’s captain had written a four-page letter to Navy officials, where he asked for the crew of the aircraft carrier to be evacuated and for “decisive action” as the coronavirus spread onboard. “We are not at war,” he wrote, “and therefore cannot allow a single sailor to perish as a result of this pandemic unnecessarily.” (USA Today, April 3)

When Acting Navy Secretary Thomas Modly on April 2 fired Captain Brett Crozier for writing the letter — which wound up published in the San Francisco Chronicle — hundreds of sailors on board chanted “Captain Crozier! Captain Crozier!” and clapped as he left. A video on Facebook showed them cheering him.

It is rare that a high-ranking officer stands up to the Pentagon to defend the lower ranks of his command. What this experience shows is that the situation must have been horrible for someone so high in the chain of command to dissent. And the Pentagon’s punishment of Capt. Crozier — who reportedly tested positive for COVID-19 on April 5 — pushed the sailors to take his side.

During the U.S. war against Vietnam, when there was a conscript military, the officers, from lieutenants to generals, were despised by many of the troops. The heroic Vietnamese liberation struggle for over a decade pushed the U.S. military to the breaking point. The attitude of the rank-and-file U.S. troops at that time ran the gamut from demoralized to rebellious, which led them to disrupt the U.S. occupation.

This attitude forced the Pentagon to end the draft in 1973 and orient toward a professional military. The generals did this with a vengeance, until now they have a military force half the size it was in 1973, operating high-tech heavy weapons and outsourcing logistics.

Nevertheless, even in this professional military, low-ranking troops are still workers in uniform. Their daily pressures are not that much different from the “essential workers” –— packers at Amazon, supermarket clerks, truck drivers and post office workers. The troops come from the working class and 30 to 40 percent are from oppressed nationalities, concentrated in the lower ranks.

If the Army is called upon, along with the National Guard, to operate within the United States during the COVID-19 crisis, the troops will face two challenges: their own susceptibility to the virus and, should they be used not to assist the masses but for repression, their revulsion at following orders from a reactionary and unpopular national government.

It would be an error to assume that this week’s reports show that a major rebellion is imminent. It would also be an error to assume that it is impossible for workers’ organizations to appeal to the class interests of the rank and file in this military. A simple first step would be to support the demand for the sailors to leave their ships and for the soldiers to have all military exercises and training postponed.