In a March 26 press release Project South revealed that Immigration and Customs Enforcement detainees at the Stewart Detention Center in Lumpkin, Ga., went on a hunger strike to bring attention to COVID-19-related issues in the jail. 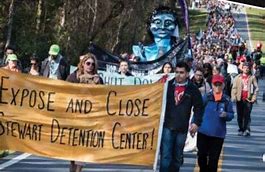 Georgia community organizers became aware of the March 24 hunger strike in which about 350 prisoners in Stewart participated. The goal was to raise awareness that they are inhumanely caged in an ICE facility while coronavirus spreads in jails, prisons and ICE detention facilities across the country.

About 2,000 people are detained at Stewart Detention Center, with 62 immigrants sharing each housing area.

“We’re just waiting to get infected!!” Ventura Quintanar-Rico, 32, of Mexico told the undocumented Latinx rights group Siembra NC. “They’re not taking the most basic coronavirus precautions here. If one of us gets infected, all of us will.  We are not able to stay 6 feet apart from each other, we share space with 62 people. We don’t want to die here and it usually takes 3 to 4 days to get medical attention.”

Even before the U.S. outbreak of coronavirus, detainees in Stewart had difficulty accessing medicines they needed. A man with diabetes told activists he has been asking the detention center for his medication all week, with no luck.

Detainees report asking for doctors when they are sick and having appointments delayed for up to three days. The nearest hospital to Stewart is in Cuthbert, Ga., over 20 miles away.

Detainees must eat from shared plates. Up to 200 are squeezed together when it is time to eat. Stewart detainees are also reporting that employees do not take basic sanitary precautions, such as using gloves or hand sanitizer when entering and leaving the facility.

Stewart detainees say officers asked them to ration one roll of toilet paper each for two weeks, claiming nearby stores do not have enough toilet paper and other supplies.

On top of the previous issues, many detainees have preexisting conditions that make them particularly vulnerable to COVID-19 if there were to be an outbreak.

‘We don’t care if you get sick’

Project South reported that over 40 new detained immigrants were brought into Stewart each day last week, and while their temperatures are taken, they are not tested for COVID-19. CoreCivic, the owner and operator of the private Stewart prison, claimed it had purchased testing kits for COVID-19, according to Project South.

Prisons and detention centers around Georgia are already reporting outbreaks and deaths from COVID-19. Lee State Prison reported six people testing positive for COVID-19,  with one death. Thirteen men are in medical isolation for flu-like symptoms, with two awaiting COVID-19 test results, according to the March 27 Atlanta Journal-Constitution.

Inmates and guards at other state prisons and county jails are reported to have COVID-19. Two inmates at Atlanta’s federal prison have tested positive for the coronavirus.