Working in an auto plant is a dangerous job. From slippery floors to toxic chemicals to improperly maintained equipment, autoworkers deal with a range of safety hazards every day. Now there is COVID-19. 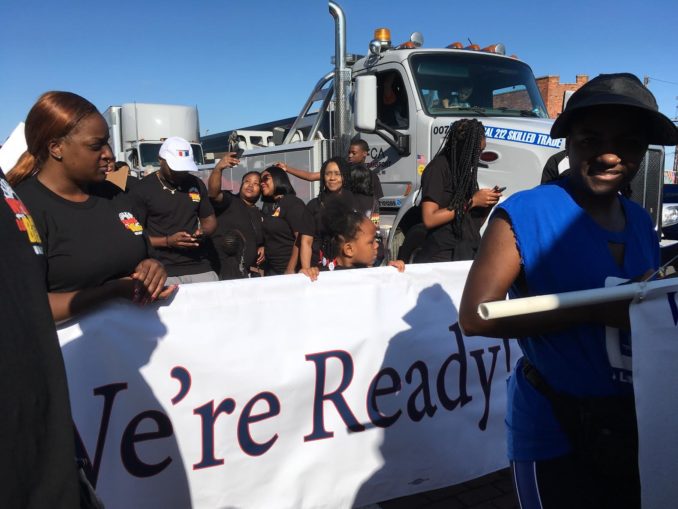 Here, Detroit autoworkers are ready to fight for a decent contract. Now they are fighting for their lives. Labor Day 2019. (WW Photo: Martha Grevatt)

On any given shift hundreds, even thousands, work under one roof. Plants setups do not allow 6-foot “social distancing” between workers. Moreover, workers at Ford, General Motors and Fiat Chrysler Automobiles have complained that cleaning of “high touch” areas has been minimal, restroom sinks do not have hot water, and job stations were not being cleaned between shifts or when workers rotate from one job station to the next.

At multiple plants run by the three companies, there are workers who have tested positive for COVID-19. Yet in Michigan, with the highest number of auto plants, Gov. Gretchen Whitmer’s March 15 order to close “non-essential” businesses contained an exemption for “manufacturing.” Other states were also allowing the plants to stay open, even after banning “large gatherings” —  which happen every workday in a big plant.

Early on, the United Auto Workers union should have insisted that the plants be closed. Instead, union heads and company heads formed a “joint task force.” Their “solutions” contained little more than unkept promises to sanitize the workplace and limits on how many workers could sit at one break table. All the while, salaried employees were being encouraged to telecommute.

Rank-and-file workers were not appeased. As United All Workers for Democracy stated, “We do not believe the answer to this crisis is another joint program between high-ranking union officials and auto executives, where those who are making the decisions on what the proper protocol should be inside of the plants will not have to live with the consequences of those decisions. We believe the correct decision to make in regards to our union leadership would be to demand a shutdown of all facilities and for workers to be paid their full wages until these facilities are safe to work inside of again.” (uawd.org)

Meanwhile autoworkers began to take matters into their own hands. A group of 17 at FCA’s Warren, Mich., assembly plant stopped work on March 16. Before that, FCA workers in Italy and Canada held strikes to protest the unsafe working conditions they were subjected to.

On March 18, workers at FCA’s Sterling Heights, Mich., assembly plant reported to work at 5 a.m., but refused to handle any parts or touch any equipment. By 8  a.m. all the plant’s workers were sent home and FCA stopped production at the plant. Later that day the UAW announced that the three companies had agreed to close the plants until at least March 30. That was a huge victory.

However, thousands are still working under conditions that pose a risk of infection. These include many employed by third parties which supply parts to the Detroit Three big auto companies or perform janitorial services. Some Detroit Three warehouses remain open.

Hundreds of construction workers hired by subcontractors staged a walkout at a new FCA plant being built in Detroit. At least two of the skilled tradespeople have tested positive for COVID-19. FCA has since temporarily halted construction work on the new plant.