March 4 — Tonight the Oakland School Board made a decision to cut more than $20 million from student services and clerical staff, but refused to make any cuts in the Oakland School Police force. A last minute amendment by Director Rosann Torres to lay off one-half of the school police department failed by a close 4-3 vote. 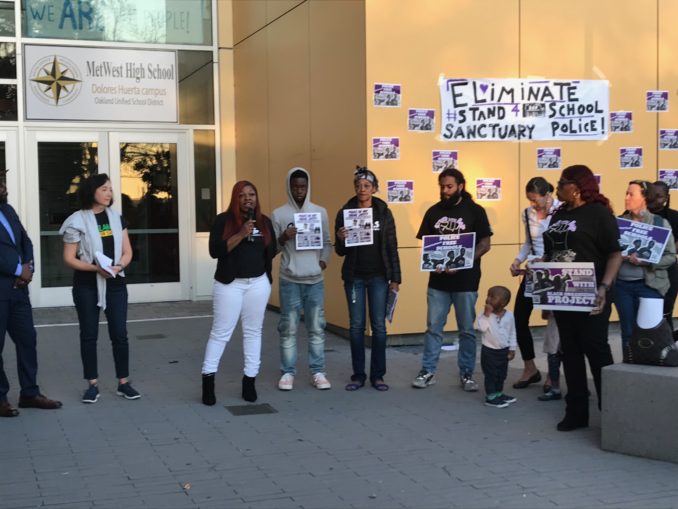 This vote came late in the night after a spirited rally outside and inside the board meeting, bringing together almost 10 years of organizing by the Black Organizing Project, involving Oakland teachers, families, clergy, students and community members.

Outside the board meeting where there were over 150 people, Jessica Black, organizing director of BOP, recalled the legacy of Black community activism in Oakland. “We are going in as part of a history of Black folks, our ancestors, who have been fighting this fight for years . . . who have said enough is enough. We don’t want to wait; we want police eliminated from schools, and those funds repurposed to things that are actually going to benefit children.”

Inside, at least 50 people made public comments at the meeting that had only one agenda item — massive cuts in student services. Speaker after speaker appealed to the board to instead end the school-to-prison pipeline by defunding the Oakland School Police force.

The Oakland Unified School District is the only system in the 18 districts that make up Alameda County with its own police force. According to OUSD data, Black students make up 26 percent of the school population, but 76 percent of students arrested.

In September 2019, BOP presented a “People’s Plan for Police-Free Schools” to the school board, calling for the elimination of the Oakland School Police Department by 2020. The plan included restructuring campus safety personnel as peacekeepers; reinvesting the $2.3 million police budget into school mental and behavioral health and special education staff; and establishing community oversight of campus safety personnel, along with community policing. BOP has linked this campaign to the overall struggle of teachers, parents and students for economic and racial justice in Oakland. (tinyurl.com/rhfgfkg)

In a BOP statement released after the vote was lost, the group thanked the community for coming together and speaking out at the board meeting. BOP also stated, “For us, [it] was a vivid example of how the school board is more interested in policing Black and Brown students than in protecting them and making courageous decisions to cut harmful policing departments and punitive discipline practices.

“This is bigger than a campaign or an organization; it is a united front and together we have taken intentional steps in creating Black Sanctuary in Oakland schools. WE are so close!” According to BOP, their racial justice plan received more support than ever from both the community and the board at that meeting.

The Black Organizing Project is continuing its campaign to lay off the police and restore the cuts to student services. Check out blackorganizingproject.org and #EliminateSchoolPolice on Twitter.