Chelsea Manning, a hero to antiwar activists, was finally released March 12 from prison after years of on-and-off incarceration for “leaking classified information” to WikiLeaks when she was a U.S. Army intelligence analyst. In 2013, a U.S. military judge found her guilty on 20 counts, including six under the Espionage Act, and sentenced her to an unprecedented 35 years in prison. Her real “offense”: the exposure of U.S. war crimes in Iraq and Afghanistan. 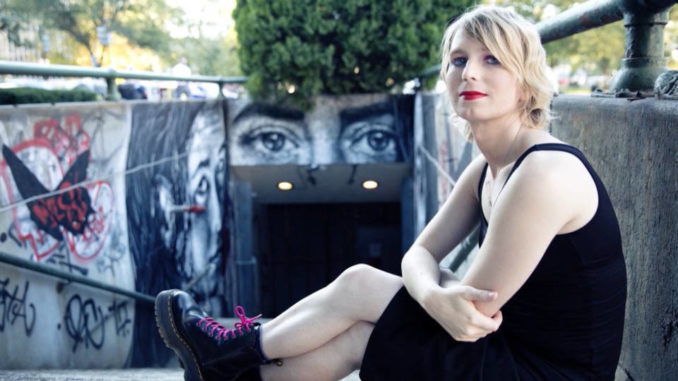 While on active duty in Iraq, Manning released 700,000 classified and sensitive military and diplomatic documents, which revealed details about modern imperialist wars never before made public. They included the infamous “Collateral Murder” tape of U.S. helicopters firing on people in Baghdad in 2007. This attack killed 12 people, including two Reuters staff members, and seriously wounded two children.

Manning also exposed previously hidden information about torture of U.S. detainees at the U.S. Guantanamo Bay Naval Base. Awaiting trial, she suffered brutal conditions, first held in a cage inside a tent in the Kuwait desert, and then threatened by guards with being “disappeared” to Guantanamo.

After sentencing, Manning’s years in prison were similarly punitive, especially because of her identity as a transgender woman and her unbroken determination to remain true to her values. Her nine months of solitary confinement from 2010 to 2011 at the Marine Corps brig in Quantico, Va., were described as “cruel, inhuman and degrading treatment” by Juan Mendez, U.N. special rapporteur on torture.

Manning said about revealing the documents: “Once you come to realize that the coordinates in these records represent real places … that the numbers represent actual human lives … then you cannot help but be reminded how important it is for us to understand and, hopefully, prevent such tragedies in the future.” (Guardian, May 27, 2015)

Released from military prison in 2017, having served almost seven years, Manning was jailed again in 2019 after refusing to testify at a secret grand jury — part of a U.S. attempt to extradite Wikileaks founder Julian Assange from Britain and prosecute him under the Espionage Act. His crime: exposing U.S. atrocities.
A judicial order imposed a fine of $1,000 a day on Manning, starting the day the grand jury was convened, to force her testimony. While waiting for the court’s answer to her petition for release after 10 months in prison, she attempted to take her life on March 11.

Manning re-affirmed her commitment to noncooperation in a statement released by her lawyers before that attempt: “I have had these values since I was a child, and I’ve had years of confinement to reflect on them. For much of that time, I depended for survival on my values, my decisions and my conscience. I will not abandon them now.” (tinyurl.com/ssnuvvj)

On March 13, U.S. District Judge Anthony J. Trenga ordered her release. When Manning’s legal team asked for her fine to be vacated, the judge refused.

Two days later, over 6,000 supporters donated online to pay off the $256,000 court debt. They raised that amount and more! One contributor said: “Those of us who support Manning have been looking at this more as a fine on us than on her, because of course we were never going to let a heroic whistleblower spend the rest of her life under crushing debt.”

Beginning with Manning’s 2010 arrest, Workers World joined in the worldwide call to “Free Chelsea Manning!” Global activism led to her release and support continues today. Solidarity messages can be posted at facebook.com/savemanning/.