This is partially based on articles previously published in Workers World newspaper to commemorate International Working Women’s Day. New information has been added.

March 8, International Working Women’s Day, is a day of solidarity with women and people of all genders worldwide who face U.S. militarism, as well as with the world’s workers who are super exploited and abused by imperialist corporations.

Capitalism, with class society, private property ownership and patriarchal relations, is at the root of women’s, gender and national oppression. Global corporations, in their drive for megaprofits, super exploit the world’s workforce, intensify inequality and poverty, and spew racism, bigotry and misogyny.

Transnational companies and their local bosses abuse women, with physical and sexual violence, as they mistreat and disregard all workers. The quest for profits drives the horrible crimes of sex and human trafficking of women, children and people of all genders.

All this cries out for a socialist solution: public ownership of industries; production for human needs, not profits; guaranteed jobs, health care and all necessities; sharing of wealth and resources — and peace.

Cuba has shown that socialism can provide the basis for women’s equality. Led by the Federation of Cuban Women, women there have made great political, economic and social strides since the revolution triumphed in 1959. 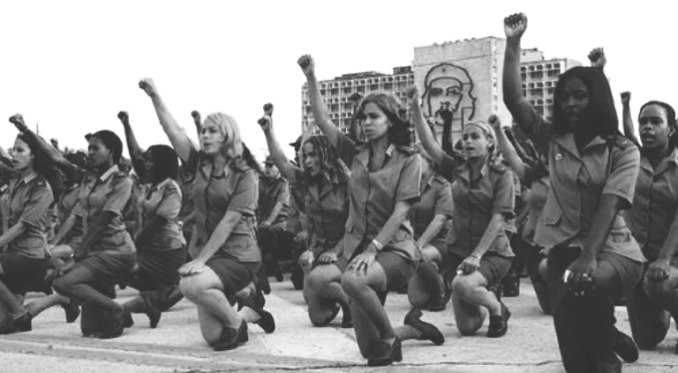 The pro socialist and working-class essence of IWWD remains, despite capitalist and media cover-ups of its real meaning. Its history is rife with struggle and solidarity. This special day has been celebrated by socialist countries and parties, national liberation movements, anti-imperialist, anti-corporate, women’s and workers’ organizations on many continents.

This historic day’s founder was Clara Zetkin, a leader of the left wing of the German Social Democratic Party (SPD) and head of their International Women’s Secretariat. The SPD, which had 82,000 women members in 1910, promoted women’s rights, including the right to organize politically and vote. Zetkin agitated for 21 years to establish International Working Women’s Day. 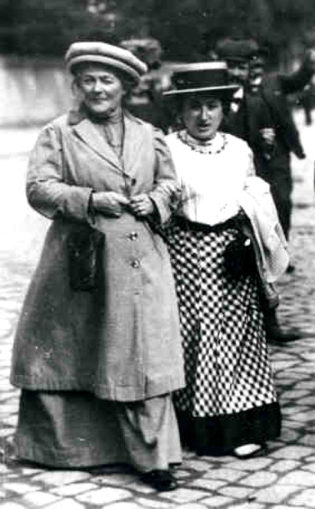 Women in Europe were pouring into factories as expanding industries needed their labor. They were hired at low pay to do unsafe, horrific jobs without legal rights. Determined to fight for political and economic rights, they joined labor unions and socialist parties. It was a time of great ferment and burgeoning socialist ideas.

German socialist Luise Zeitz, in collaboration with Zetkin, proposed at the Second International Socialist Women’s Conference in August 1910, held at the Workers Assembly Hall in Copenhagen, that a special day be set aside annually to recognize the worldwide struggles of women workers and to build solidarity. Participants agreed to fight for the 8-hour workday, maternity leave and health benefits.

Another impetus for Women’s Day, Zetkin recognized, was the demonstration in New York by thousands of garment workers, mainly im/migrants and many socialists, demanding their rights, on March 8, 1908. So was the three-month garment workers’ strike a year later — the “Uprising of the 20,000” — led by 23-year-old Clara Lemlich, a Russian-Jewish immigrant. 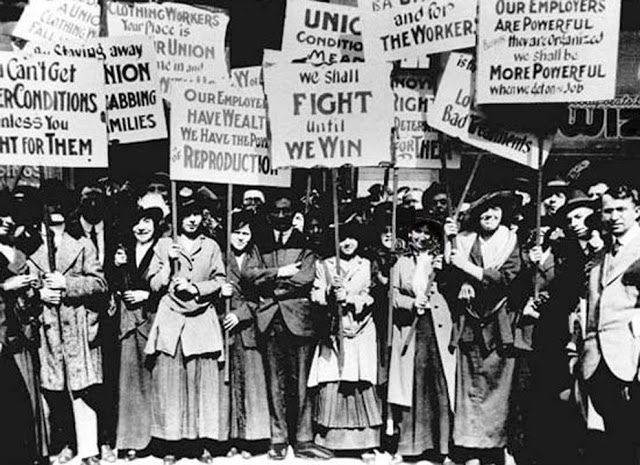 Over 100 women from 17 countries, representing labor unions, women’s organizations and European socialist parties, voted unanimously for the proposal. It declared: “In agreement with the class-conscious political and trade union organizations of the [working class] in each country, socialist women in all countries shall organize a Women’s Day each year.” (leftwrite.wordpress.com)

Zetkin, a political strategist, calculated that organizing for IWWD was a crucial step in building an anti-capitalist movement. She aimed to foster cooperation among women in labor unions, women’s organizations and socialist parties so they would fight jointly. This would raise class and socialist consciousness and push the class struggle forward. In her estimation, the most political women workers would be won to opposing capitalism — the source of women’s oppression — and would embrace a socialist perspective.

An internationalist, Zetkin deduced that a yearly, coordinated multi country protest on the same day for the same demands would empower women’s struggles and also break down national chauvinism, strengthening ties between women in different countries and building antiwar sentiment.

One year later, Zetkin’s strategy took hold. More than 1 million people, mostly women, poured into the streets of four European countries on March 19 to demand jobs and an end to gender discrimination. Russian revolutionary Alexandra Kollontai said that the first “Working Women’s Day was one seething sea of women, certainly the first show of militancy [in Europe] by working women.”

Soon 90,000 protesters were in the streets, calling for “peace, land and bread.” This earthshaking action led to the Russian czar’s ouster, which opened the gates to a workers’ revolution later that year. In 1921, the socialist Soviet Union was the first government in the world to codify women’s equality. 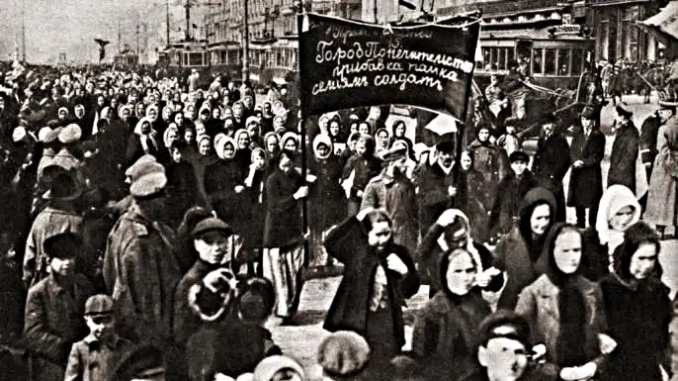 Zetkin, fervently antiwar, was jailed repeatedly for agitating against World War I. Demonstrations won her release. She left the SPD in 1916 because of its pro-war position and, with Rosa Luxemburg and others, established the precursor to the Communist Party of Germany.

An antiracist, Zetkin opposed U.S. Jim Crow laws. She wrote an impassioned plea in 1932 calling for the release of the Scottsboro Brothers, nine young African Americans who were being railroaded to prison, and possible execution, on false charges of sexually assaulting two white women. One of the women later refuted the charges and then joined the mass movement that saved their lives.

As German fascism menaced, Zetkin agitated for all workers, women and men, to join the fight against war and fascism in the Parliament (Reichstag) on Aug. 30, 1932. At the age of 75, ailing and nearly blind, Zetkin bravely spoke for an hour as Nazis yelled death threats at her.

IWWD actions around the globe over the last 50 years have included the freeing of political prisoners in Uruguay, sit-ins in Argentina of agricultural workers and uprisings in the Philippines. Coordinated actions have protested the U.S.-led war in Iraq and the U.S.-backed Israeli siege of Gaza. Yemeni women have denounced the U.S.-backed Saudi war in Yemen.

In 2010, there were worldwide commemorations of IWWD on its centennial, as well as a determined post-earthquake march in Haiti.

Indigenous peoples have protested corporate destruction of the planet. South Korean workers have demanded gender equality at work. Bangladeshi garment workers have rallied, and domestic workers in Indonesia have marched. Sex workers have insisted on their rights. Migrant workers have demonstrated in Australia, Asia and Europe for legal protection and rights. 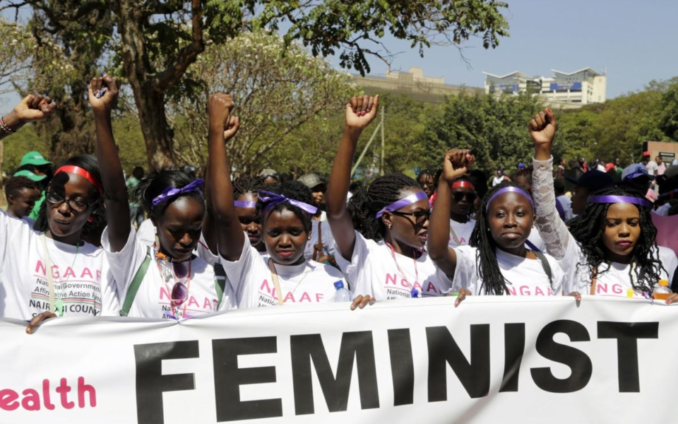 Demonstrations were held in the Middle East and North Africa in the early 2010s during the Arab Spring. Events hailing women workers have been held in South Africa. Throughout Latin America, marches for reproductive rights, especially safe legal abortion, and against antiwoman violence have been held yearly. In 2018, winning LGBTQ2+ rights was hailed in India. Last year, Cubans celebrated 60 years of socialist revolution.

In the U.S., the women of Youth Against War & Fascism and Workers World Party revived IWWD’s revolutionary legacy in 1970, marching from a rally in historic Union Square to the Women’s House of Detention in New York. They expressed solidarity with their imprisoned sisters, including two of the New York Panther 21.

The Women’s Fightback Network began to commemorate IWWD in New York in 2004.  Out of that grouping was born the International Working Women’s Day Coalition, which has annually marked this special day since 2009 with demonstrations, rallies and meetings.

On several occasions, the coalition has memorialized the 146 victims of the Triangle Shirtwaist Factory fire of March 25, 1911, at the building’s site in New York.  This coalition always raises struggles of women workers, im/migrants, people of color and gender nonconforming people in the U.S., while promoting global solidarity.

Many of Zetkin’s demands resonate today, including the need to improve conditions for women workers, with labor unions, legal protections, jobs at a living wage, health care, and all the necessities of life — and to build worldwide class unity and solidarity.

But imperialism and its endless wars raise other issues than those Zetkin addressed. Colonialism, capitalist globalization and national oppression — with underdevelopment of continents, theft of land and resources, super-exploitation of workers, and the propagation of racism and all forms of bigotry — greatly broaden the demands from those raised in 1910 in Copenhagen.

Women of Gabriela march in Manila, the Philippines.

A global socialist women’s conference today would first extend invitations to women in Africa, the Middle East and the rest of Asia, Latin America and the Caribbean — whose countries have been oppressed by imperialism. Such a gathering would promote reparations for countries ravaged and impoverished by global capitalists and demand an end to all imperialist militarism.

Also invited would be women workers and people of all nationalities and genders in the U.S. — im/migrants, refugees, single parents, the unemployed, homeless, seniors, youth, people with disabilities, survivors of sexual abuse and domestic violence, low-income individuals, LGBTQ2+ people, prisoners, sex workers, and all those lacking health care and other necessities. Everyone’s grievances would be heard and incorporated into demands.

Clara Zetkin was right in saying that international solidarity is essential.  She stressed that it is urgent that women and all workers organize to get rid of capitalism and fight for socialism. That is the legacy of 110 years of International Working Women’s Day.

The writer’s grandmother, Sophie Stoller, an immigrant garment worker, was employed at the Triangle Shirtwaist Factory. She was ill and didn’t go to work on the day of the fire. A socialist, she joined the 1908 garment workers’ march and the “Uprising of the 20,000.”