The Oakland Education Association, part of the California Teachers Association/National Education Association, has taken heroic action on many issues affecting teachers, students, other workers and the larger Oakland community. February 21 marked the first anniversary of the historic Oakland teachers’ strike for lower class size, an end to school closures, more counselors and nurses, and higher wages. The OEA has been working with a coalition to stop co-locations of charter schools on public school campuses. It has also joined the Black Organization Project Campaign to cut the school to prison pipeline by eliminating the Oakland school police department. On March 1, the OEA unanimously endorsed the Sanctions Kill campaign, saying no to U.S. wars and U.S.-imposed sanctions, and saying yes to funding education. 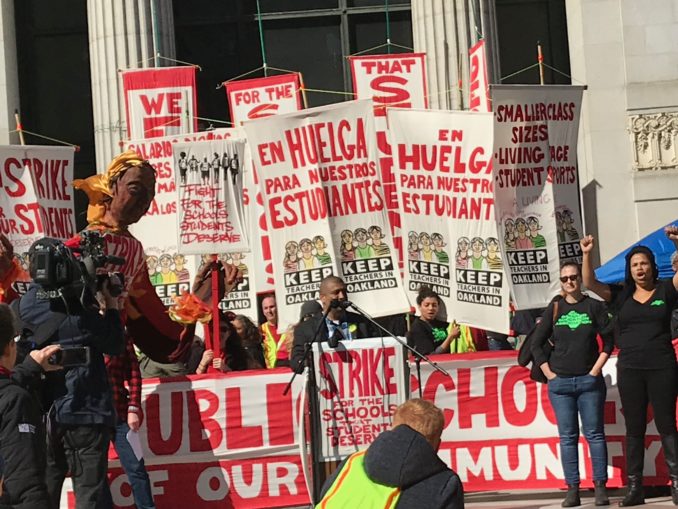 Whereas sanctions and economic blockades are being imposed by the United States and its allies – in violation of international law – against countries that resist Washington’s neoliberal policies and regime change efforts; and

Whereas U.S.-imposed sanctions are a form of economic warfare, causing death and suffering in some 39 countries with one-third of the world’s population as of 2019; and

Whereas in every country facing U.S.-imposed economic sanctions, the most vulnerable – infants, children, the chronically ill and the elderly — suffer the most; and

Whereas the U.S. military budget continues to increase while funding for public education and social programs suffer cuts; and

Whereas U.S.-imposed sanctions involving asset freezes and property seizures are modern-day piracy, allowing for massive redistributions of public wealth from sovereign countries into the accounts of U.S. banks and financial institutions; and

Resolved, that the Oakland Education Association go on record in opposition to United States-imposed economic sanctions against other countries, and in support of the March 13-15 International Days of Action against U.S.-imposed Sanctions and Economic Warfare during the month of March 2020, including endorsing the March 14 Oakland public educational forum.