The following slightly edited talk was given at a class on “Why We Need a Revolution” in New York City on Feb. 29. 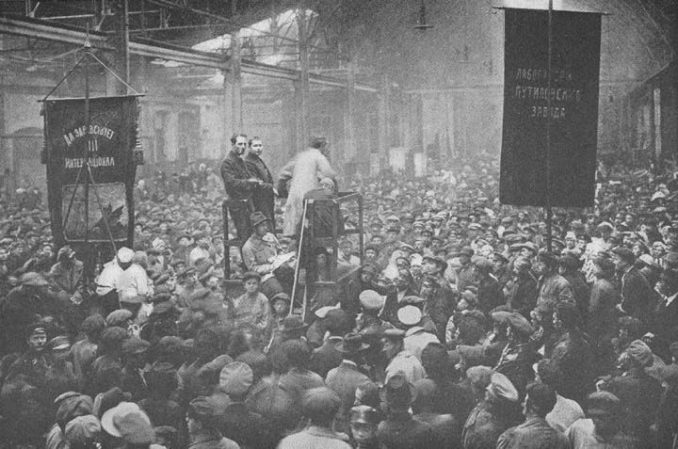 A factory committee meets during the 1917 Russian Revolution

The politicians and officials in the Democratic and Republican parties are merely the employees of wealthy bankers, real estate executives and health insurance CEOs. They exist to do their bidding, and nothing more. Anyone attempting to use the capitalist democracy to increase the power of the working class, at the expense of the capitalist ruling class, will find their way blocked.

Separately, we are weak and powerless. United, we are unstoppable.  A united working class could also withhold its labor from the capitalist ruling class. It is workers who power our economy. Factories, ports, shipping, supermarkets, fuel — all the vital arteries of our society are controlled by workers.

Should we be organized toward a single goal, if we were ever to withhold our labor, we would bring society to a grinding halt. This is how work-class economic power can create revolutionary political change.

If we look back at history, every successful socialist revolution has followed this path. Though each revolution had different characteristics — driven by the material differences in their respective countries — all successful revolutionaries understood the importance of organizing the masses into a durable and democratic structure that could resist the ruling class.

In the Russian Revolution, it was the Workers Councils which drove the radicalization of Russian society. In Petrograd and other industrial cities, factory workers were brought together in democratically run councils. They debated and voted on measures which would improve their lives as workers. Being brought together in struggle against the bosses, they radicalized and grew bolder in their demands.

In February 1917, the workers of one Petrograd factory asked their bosses for an eight-hour workday. By October 1917, those same workers were demanding their bosses provide them with arms. It was through the process of democratic organization that workers began to learn their power. There are no shortcuts.

This pattern has held throughout the world. In China and Vietnam, village councils formed the backbone of the revolution, providing resources and security for China’s Red Army and Vietnam’s People’s Liberation Army. In Cuba, the backing of rural peasants gave cover to the guerrillas of the 26th of July Movement. Even today, in Bolivia and Venezuela, it is the neighborhood people’s councils that form the front line of the resistance against right-wing coup forces.

There are no shortcuts. The working class must be organized if we are ever to have a chance of defeating the capitalist ruling class. This must be done because it is our only hope of putting a stop to the injustices of class society.