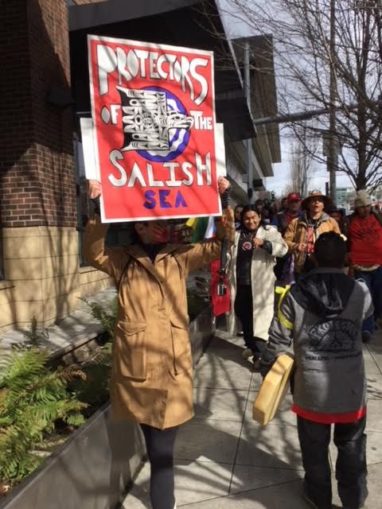 About a hundred people marched through central Seattle in solidarity with the Wet’suwet’en Nation of Canada on Feb. 29. This was a prayer walk on occupied Duwamish land, organized by the Protectors of the Salish Sea, led by Indigenous people with allies.

A week earlier on Feb. 23, Seattle cops brutally attacked the Protectors’ peaceful pro-Wet’suwet’en prayer walk, which was made up of Native singers and drummers. Six were arrested, and many were pepper sprayed.

Facing a heavy, outlandish police presence, the Protectors resumed their prayer walk on Feb. 29 with more people and supporting organizations. They then marched to the waterfront where a water blessing ceremony with singing was held.

The Protectors have organized a number of actions in support of Wet’suwet’en in recent years, along with their demand that Washington state Gov. Jay Inslee declare a climate emergency for the Salish Sea (Puget Sound and the Straights of Georgia) due to the increasing existential threat to salmon and orca and their habitats.

“We’re here to stand with the Wet’suwet’en, who have literally been invaded by the government of British Columbia,” said Paul Wagner, a founder of Protectors of the Salish Sea. He was referring to the recent brutal occupation of Wet’suwet’en land by the Royal Canadian Mounted Police and the government of British Columbia — an assault on behalf of Coastal GasLink, which aims to build a multibillion-dollar gas pipeline acoss sovereign and unceded Wet’suwet’en land.

Solidarity with Wet’suwet’en continues to grow all across the continent!