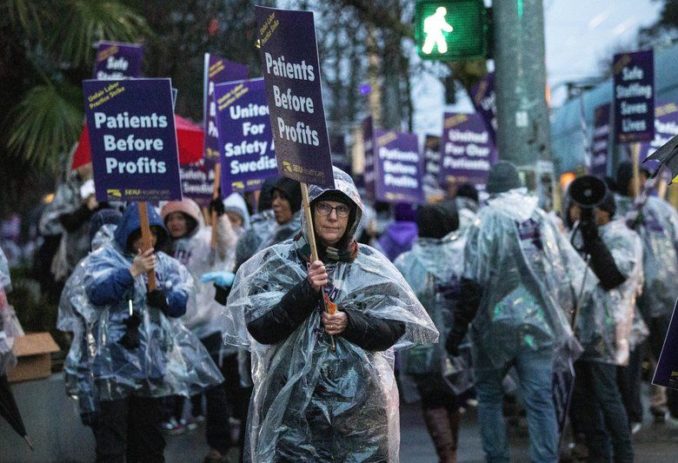 Their big issue was unsafe staffing levels — there are 900 vacant positions. The result is unsafe conditions for patients and overworked nurses and other workers. By striking, mass picketing at the hospitals and marching in the streets, the workers got their message across.

The giant merger of Providence with Swedish five years ago created a corporation set on a course of anti-union attacks and deteriorating conditions. Service Employees (SEIU) Local 1199NW has been bargaining without a contract for 10 months. The strike was an unfair labor practice action; the company has broken labor laws over a dozen times, including disciplining and firing workers for speaking out.

The striking workers included nurses, nursing assistants, tech and lab workers, dieticians, environmental service workers and others. They are fighting for safe nurse-to-patient ratios; manageable workloads for environmental service technicians so they can properly clean and disinfect patients’ rooms; safeguards against racial discrimination so everyone is treated with respect on the job; and fair wages that attract and retain qualified staff.

Many studies have proven that unsafe staffing levels in hospitals can lead to lower quality care, including falls, infections, medication errors and increased deaths.  Conditions like these are criminal at Swedish, especially when there is a potential spread of the coronavirus epidemic.

The Chinese public medical system has organized a mass health care mobilization, better than the captains of the health industry in the U.S. would even think of doing.  Local 1199NW has charged that it’s not safe for patients when environmental service technicians are overloaded with too many rooms to clean.

Swedish is a giant $24 billion corporation with an $11 billion cash reserve, the union points out. Providence controls over 1,000 facilities in seven states. It spent $11 million to fly in hundreds of replacement personnel just before the strike and hired 200 “tactical security guards,” which outraged the strikers.

Providence shut down two of its hospital emergency rooms, rescheduled all elective surgeries and patient classes, and closed the labor and delivery unit at one hospital.

Some 1,000 striking caregivers rallied on Jan. 29 at Swedish First Hill Hospital Campus and marched to downtown Seattle. The mainly women strikers chanted, “Swedish, Jump Off It; Put Patients Before Profit!” They carried such signs as “United For Our Patients!

At the downtown Westlake Center rally, Lisette Vanunu, an intensive care nurse, said, “We are working to provide our patients with the highest level of care they need. We often have to work an extra four hours after working 12 hours to make sure everyone is cared for.”

There the hospital workers received needed support for their fight against Swedish. Three public school nurses from the Seattle Education Association spoke in solidarity with the strikers. The Washington State Nurses Association and the Food and Commercial Workers Local 21, who represent many health care workers across the state, also had speakers.

After the three-day strike, Swedish bosses tried on Jan. 29 to interfere with the workers’ return to work by saying their replacements were still on the job under five-day contracts. But the workers came to work early en masse led by President Sosne at First Hill.

They came back from a strong and very well organized mass strike. Following the path of the great 1199 union struggles which organized New York City hospitals, this was the largest health care strike in the country in recent history, according to Local 1199NW.