The U.S. state continues its war drive, pushed by ruling- class desperation to maintain capitalist economic domination. While the U.S. has not carried out further military strikes on Iran, it has imposed even harsher sanctions in an economic war that could claim untold numbers of Iranian lives. More than ever, “war by sanction” is the U.S. weapon of choice.

World resistance to U.S. aggression is growing. A Global Day of Protest on Jan. 25 called for “No War on Iran! U.S. out of Iraq!” Through international cooperation and on short notice, actions were mounted in 210 cities, with almost 200 groups endorsing. (tinyurl.com/slchkue)

Further actions against sanctions and economic war are called for March 13-15. (sanctionskill.org) Here are a few snapshots of the many Jan. 25 actions in the U.S.

Joining protests around the world, hundreds of Boston activists rallied in the Commons near the Massachusetts Statehouse, an action initiated locally by Answer. Brian Shea, a long-time disability rights leader with the IAC, said: “Four million people in Iraq [yesterday] served an eviction notice on U.S. empire and its occupying troops. We need to follow the example … and be hitting the streets!”
After the speakout, students, people of color, women, LGBTQ2S+ and disability rights activists, socialists, trade unionists, families, veterans, clergy, anti-war and peace activists then had a spirited march through downtown. Kristen Turgeon, a Workers World Party youth leader, galvanized the crowd, belting out the union song, “Which Side Are You On,” reminding everyone: “We’re on the side of the workers worldwide!” 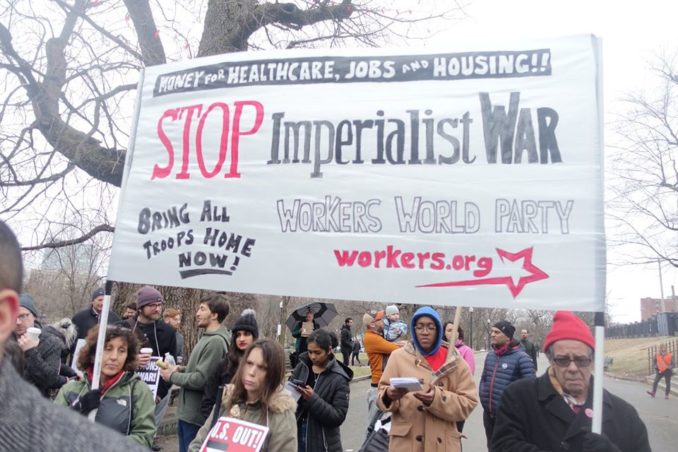 In New York City, people rallied at Columbus Circle in pouring rain and harsh weather, demanding “No U.S. War and Sanctions on Iran!” Speakers mentioned the march of millions in Iraq demanding “U.S. Out!” and called for an end to U.S. coups and sanctions, including those that have killed more than 1 million Iraqis. The rally was co-chaired by representatives of the IAC and Answer. 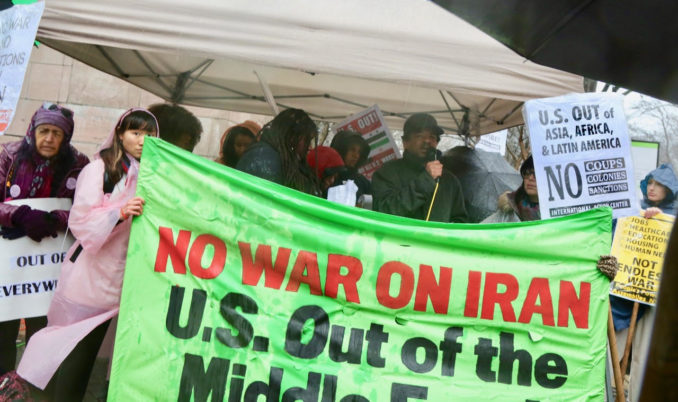 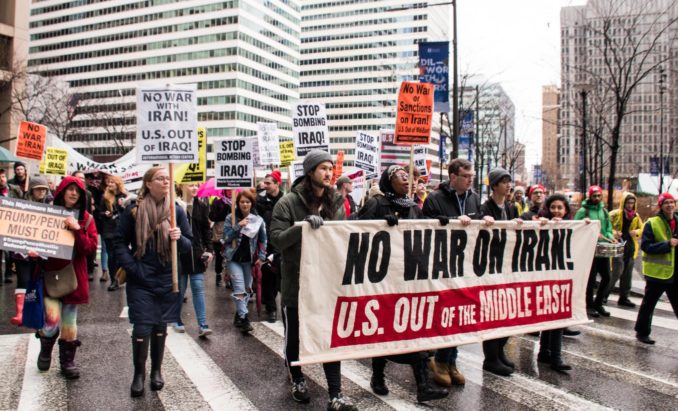 Global protest brought more than 100 people to Piedmont Park in midtown Atlanta. They took to the streets, marching on Peachtree Street, the city’s main thoroughfare, to the Georgia Tech Research Institute. The lead banner declared, “No Tech for War,” protesting the GTRI’s contracts for hundreds of millions of dollars to develop drone and automated weapons delivery systems. 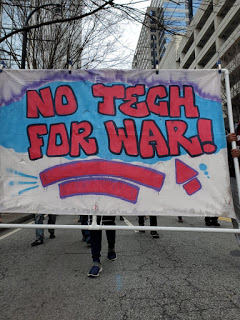 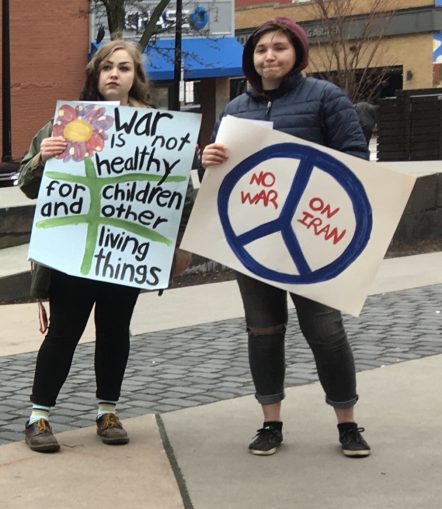 A cacophony of honking horns rang out for two hours as Houston activists protested. Responding to WWP signs, “HONK for No War!” drivers at a busy intersection obliged, car after car, including almost all METRO bus drivers. Zac of PSL chaired a militant rally that included speakers from WWP, Answer, veteran antiwar activists and youth. Speakers were strongly anti-imperialist, demanding removal of all U.S. military bases around the world, including more than 800 in the Middle East. An Indian community representative announced a protest at the Indian consulate Jan. 26 to condemn recent India citizenship laws discriminating against Muslims. 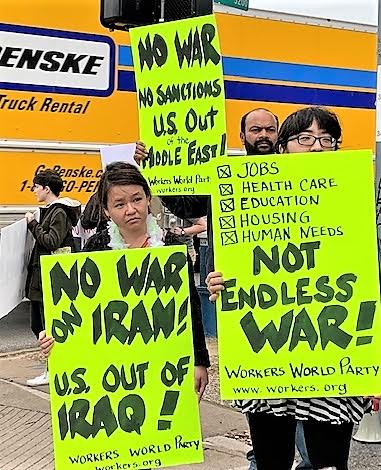 Elsewhere in Texas, a spirited rally against U.S. war was held in San Antonio. 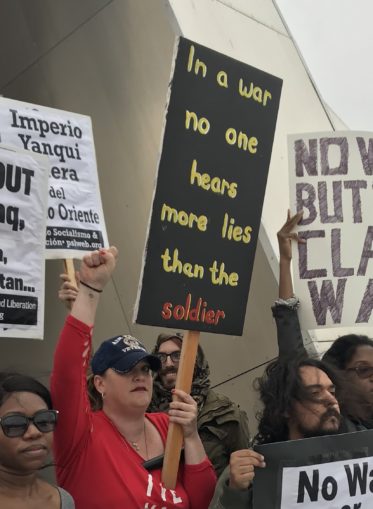 Over 500 people marched in Denver under the slogans “No justice, no peace! U.S. out of the Middle East!” and “No War on Iran!” A broad spectrum of speakers, including independent socialists as well as members of the Green Party, Poor People’s Campaign, Denver Peace Council and Answer, detailed how the cost of war hurts all working people, wasting money needed for the environment and infrastructure, and cutting funds for housing, education and health care. 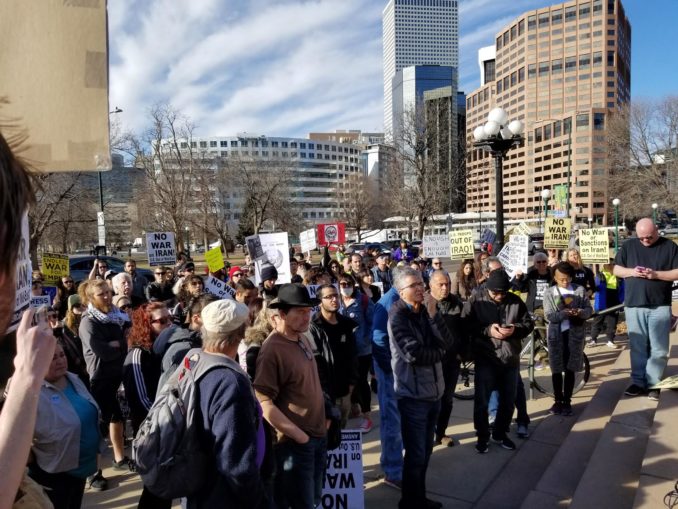 The anti-war protest brought almost 1,000 people into the streets of downtown San Francisco. Though the morning rally had to be moved due to the annual right-wing anti-abortion parade down Market Street, a broad coalition of activists gathered and marched to Union Square, a very busy shopping district. The demonstration was primarily organized by USLAW, CODEPINK, Answer and the Arab Resource and Organizing Center. A speaker from BAP, Yahne Ndgo, tied the fight against the U.S. war machine to  the struggle of unhoused people in San Francisco for housing justice. 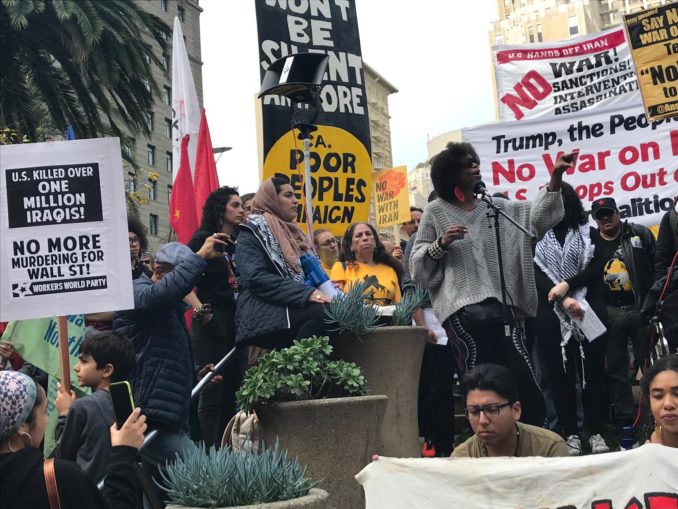 Nearly 200 people demonstrated in Portland, Ore., for immediate withdrawal of U.S. troops from the Middle East. A large grouping of left, progressive, anti-imperialist and peace groups organized the protest and plan to continue together as the Portland Anti-War Coalition. Its next event is a panel on the impact of U.S. sanctions, invasions and coups. Some groups involved are WWP, Portland DSA, Gabriela-Alliance of Filipino Women, the International League of People’s Struggles, Sanctions Kill PDX, VFP and the All-African People’s Revolutionary Party. Communications Workers Local 7901 passed a resolution endorsing the Jan. 25 rally. 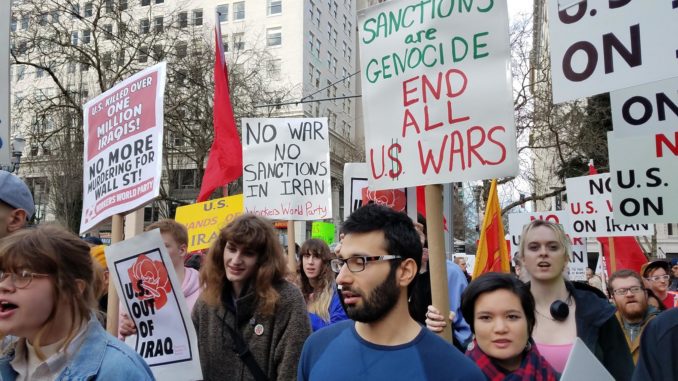