The 47th anniversary of Roe v. Wade, the Supreme Court decision that legalized women’s right to choose abortion, was Jan. 22. While religious anti-abortion forces have been trying to overturn it ever since, the threat has never been greater —  especially with woman-hater, racist, anti-LGBTQ2+ Trump in control of the state.

Women Strike for Equality Day, Aug. 26, 1970, New York City. Women of Youth Against War and Fascism, including Sue Davis, were in the march.

Trump took a bold step on Jan. 24 by being the first acting president to address the so-called “March for Life” in Washington, D.C. The reactionary, white supremacist march has been organized by the Catholic Church-backed, misnamed “Right to Life” for the last 46 years and since 2017 reinforced by white evangelicals.

“Unborn children have never had a stronger defender in the White House,” Trump stated. Too true. Contrast that with his administration’s plan to reduce funding for food stamps, which means free school meals for nearly a million poor children are in jeopardy and up to 5.3 million people, including thousands of children, could be cut from the program. (cbsnews.com, Dec. 10) Other government services which assist low-income children are at risk.

In his attack, Trump made the preposterously false claim that Democrats support infanticide and bragged that he will withhold federal money from California if it does not drop a requirement within 30 days that private insurers cover abortions.

Both the Guardian and the New York Times called Trump’s appearance an election appeal — which ironically coincided with the final formal argument in the Senate for his removal from office. The Guardian, calling it “a sign of desperation,” stated: “Trump is well aware, of course, that evangelicals don’t seem to give a damn about moral deficiencies — just as long as he cracks down on women’s reproductive rights they’ll continue to support him. So that’s exactly what he’s doing.” The Times reported that 80 percent of white evangelical voters helped crown King Trump in 2016.

Refuting Trump, Alexis McGill Johnson, acting president and CEO of the Planned Parenthood Action Fund, said in a counterstatement: “[W]e’ll be standing with the nearly 80 percent of Americans who support abortion access. We’ll never stop fighting for all the people in this country who need access to sexual and reproductive health care, including abortion.” 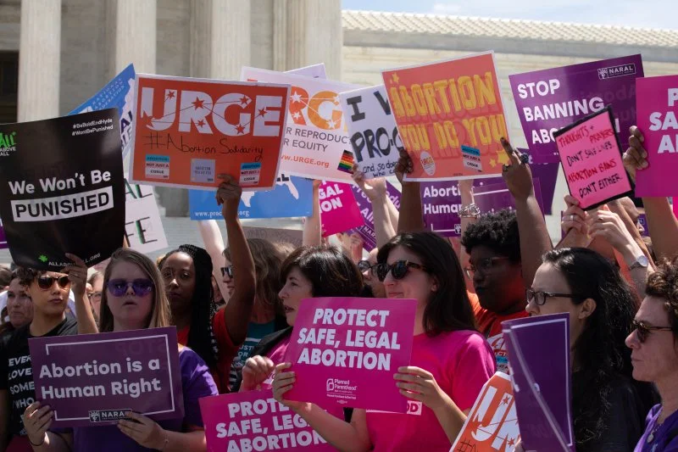 Protest outside misogynist Supreme Court, May 21 2019.

Meanwhile, there are at least four ways the blatantly patriarchal Trump administration is using state power to attack women and other gender-oppressed people.

On March 4, the legal case, June Medical Services LLC v. Gee, comes before the Supreme Court. The case is identical to one plank of a Texas law the Supreme Court ruled unconstitutional in 2016, Whole Woman’s Health v. Hellerstedt. The disputed Louisiana law, Act 620, would prevent doctors from providing abortion care in the state unless they have admitting privileges at a local hospital. The goal of the law is to limit the number of abortion clinics (as happened in Texas) and restrict access to surgical abortions.

The Center for Reproductive Rights is arguing against the Louisiana law  — backed by dozens of medical, legal and other organizations promoting rights for women, LGBTQ2+, various nationalities and people with disabilities. It seems the Fifth Circuit Court of Appeals flouted the Supreme Court when it upheld the Louisiana restriction. Should the court overturn its own decision — thanks to Trump appointees Neil Gorsuch and Brett Kavanaugh — the case could be used by anti-abortion state legislators to limit access to surgical abortion across the country.

Anti-abortion state legislators introduced a record number of near-total abortion bans, so-called “reversal laws” and other restrictive legislation in 2019. Undoubtedly emboldened by Trump’s braggadocio, they are continuing to introduce bans this year even in states like New Hampshire where there is a strong pro-choice majority.

Another legislative anti-woman ploy is passage of “abortion reversal” laws based on the pseudoscience that medication-induced abortions can be reversed and the myth that people who have abortions often regret their decision. New research, published the week of Jan. 13 by the journal Social Science & Medicine on emotional responses post-abortion, shows that 99 percent of women don’t regret their abortions after five years. The Guttmacher Institute, which conducts in-depth research on reproductive needs, corroborated that no evidence shows abortion is responsible for mental health problems. (rewirenews.com, Jan. 15)

But what cannot be quantified are the effects of Trump’s Department of Health and Human Services, stacked with anti-abortion, misogynist bigots who issue and promote anti-reproductive health care rulings like “conscience clauses” and the “domestic gag rule.” The latter was designed to reduce access to reproductive health care, particularly abortion, by exercising state power over some of the most in-need, vulnerable people in this country: the 4 million low-income women and gender-oppressed people enrolled in Title X.

By significantly adulterating Title X of the Public Heath Services Act, passed in 1970 during the Nixon era, the revamped regulations do not allow Title X providers, as of Aug. 19, to conduct abortions alongside other services or offer patients referrals for abortions. All Title X recipients are poor people of color, youth, rural residents, im/migrants, people with disabilities and survivors of domestic violence. (For background, see WW article, “While rate of abortion declines/Title X gag rule will only increase need for abortion.,” Oct. 4)

The primary target of these changes was Planned Parenthood, the largest private provider of comprehensive reproductive health services, serving about 40 percent of more than 1.5 million women and gender-oppressed people who need contraception, testing for cancers, treatment for sexually transmitted infections and abortions. Planned Parenthood stood up to the Trump-Pence assault by opting out of Title X on Aug. 19.

The most important question is: How is the gag rule affecting Title X patients? The Guttmacher Institute cannot provide such data. It would be difficult, if not impossible, to get DHHS authorization to survey all 4 million Title X patients and clinics that opted in.

How many clinics have been forced out of Title X, denying convenient, timely, affordable access to abortion and other medical services? How many patients are unable to find licensed health centers that address their needs, excluding abortion? How many patients can’t afford to travel for reproductive care? How many need an abortion but can’t afford to travel? (That can cost hundreds of dollars on top of surgical fees.)

While anti-abortion politicians and activists cite blatant misinformation and outright lies that also stigmatize and slut-shame to promote their views, Guttmacher supplies facts to refute them: (1) Safe, legal abortion is common and at its lowest rate since Roe in 1973. (2) State restrictions are not driving the recent decline in abortion. The decrease is due to long-lasting, more effective contraception.

Destiny Lopez, co-director of All* Above All denounced the Dec. 20  DHHS ruling mandating separate billing for abortion care. That ruling and Roe “remind us abortion rights in theory are not enough. We must also fight [for] equitable access to …  safe, healthy and autonomous decisions about our lives, bodies and futures [which are part of] the fight for dignity and equity.” She added: “[R]esearch has shown that someone who wants an abortion but is denied …  leads to a significant increase in household poverty. Health insurance that respects our decisions and upholds our health must cover abortion.” 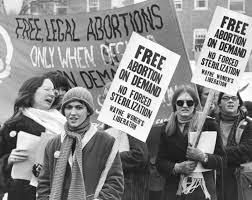 The struggle for reproductive rights in the early 1970s.

Andrea Miller, president of the National Institute for Reproductive Health: “[W]e’re writing a new playbook for abortion access by focusing on passing proactive laws to protect and expand access to abortion at the state level. … In 2019 alone, more states passed proactive protections for abortion rights and expanded access than in any previous year.”

Voto Latino spokeswoman Sandra Sánchez wrote in defense of abortion rights for people of color, low-income folks and the LGBTQ2+ community: “[W]e’re  . . . fighting to ensure that all Latinxs have access to abortion. … Research shows 73 % of Latinx voters want to see SCOTUS uphold the right to abortion, and 87 % say they would support a loved one who received one — because that’s what our community does, we support each other. … No politician should be able to take that away.”

Yamani Hernandez, executive director of the National Network of Abortion Funds: “[H]elp end abortion stigma by sharing loving and bold messages about abortion. It’s up to us to break cycles of shaming and oppression. When we envelop people having abortions in the fierce love and power that’s built in community care, we bring the world one step closer to ending the harmful stigma that isolates us from each other — and our collective power.”

Kimberly Inez McGuire, executive director of youth-focused and -led Unite for Reproductive and Gender Equity, was quoted in Truthout: “McGuire expressed a frustration heard and repeated over and over by activists, advocates and social-justice minded legislators and academics. In real life, the ‘promise of Roe’ never reached those who needed it most: the poor, youth, people of color, LGBTQIA people and rural populations.”