Hundreds of thousands — maybe millions — of Iraqis demonstrated in Baghdad, Basra and other major Iraqi cities on Jan. 24. They demanded the U.S. pull its remaining 5,200 troops out of Iraq. U.S. imperialism has occupied Iraq since the 2003 illegal invasion of the country, carried out under the phony pretext that the Iraqi government was developing “weapons of mass destruction.” 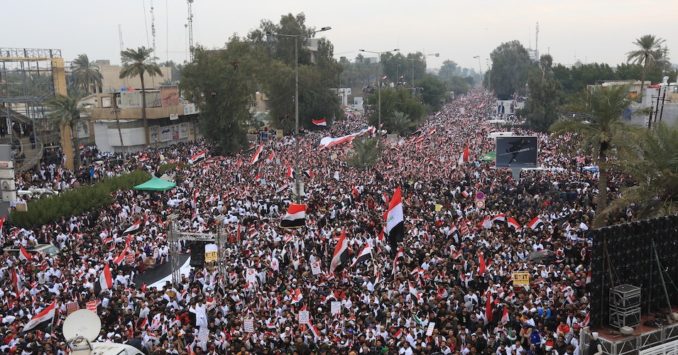 The demonstrators, who approached the “Green Zone” where the U.S. Embassy is located, waved the Iraqi flag and shouted: “Out, out with the occupier!” and “Yes to sovereignty.” Iraq Security Forces estimated the crowd at 250,000. Other estimates reached as high as 2.5 million.

While the Iraqi population in general opposes the U.S. troop presence, this opposition has grown stronger since the assassination of the two leaders. The Iraqi people fear and resist having Iraq be the scene for a military confrontation between the U.S. and Iran. In response to the assassinations, the Iraqi Parliament voted to expel the U.S. troops from their country on Jan. 6.

At the Jan. 24 demonstration in Baghdad, a spokesperson for Al-Sadr read the Shiite leader’s statement demanding the withdrawal of U.S. troops, the cancellation of “security agreements” with Washington and the closure of Iraqi airspace to military aircraft. He warned the U.S. president not to be arrogant toward Iraqi representatives, saying that if the U.S. did not meet the demands, it would be considered “hostile to Iraq.”

The New York Times of Jan. 24 reported that many marchers carried signs in English aimed at the U.S. public such as: “To the families of American soldiers. Insist on the withdrawal of your sons from our country or prepare their coffins.”

The reasons for the hatred of the U.S. occupation should be easy to understand: From 1990 to 2003, strict U.S. sanctions against Iraq caused the death of 1.5 million Iraqis, including 500,000 children under the age of five. The 2003 U.S.-led invasion and occupation killed hundreds of thousands more Iraqis and displaced millions. Also, the U.S. exacerbated religious and ethic differences that virtually destroyed Iraqi society.

Parallel to the movement led by Al-Sadr, a massive movement over the past months has been protesting corruption within the Iraqi government and demanding Iraqi sovereignty. Al-Sadr withdrew his prior support for this movement right after the Jan. 24 demonstration. Iraqi government forces then severely repressed anti-government demonstrators on Jan. 25 and 26.

Despite the internal contradictions in Iraqi society — which if underestimated would lead to political errors — a large majority of Iraqis share opposition to the ongoing U.S. occupation of their country.