For some people in Lebanon a “Week of Wrath” has begun; for others it was the “Tuesday of Wrath.” In the Hamra commercial district of Beirut, demonstrators attacked numerous bank branches during clashes with police on Tuesday evening, Jan. 14. The protesters’ primary target was Lebanon’s central bank, which had been hermetically sealed by security forces. 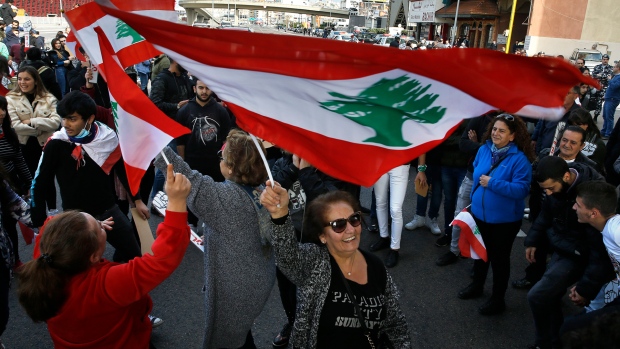 During hours of street fighting, the demonstrators destroyed windows, doors and ATMs, using stones and iron bars. They also plastered walls of the banks with slogans such as “The people want to overthrow the banks.”

Communist youth groups, anarchists and other left-wing organizations claimed responsibility for the bank storm. Numerous non-governmental organizations criticized the violence. The police reacted with truncheons and tear gas, arresting 59 people. According to the Lebanese Red Cross, 65 people were injured, most of them not seriously.

Demonstrators also clashed with security forces in the northern Lebanese city of Tripoli and in the southern Lebanese port city of Saida. They blocked important main roads with sit-in blockades, using dumped garbage containers or burned tires. From a tire fire in the Beirut district of Achrafieh, a black pillar of smoke rose high into the sky above Beirut.

An economic and financial crisis in October had provoked a wave of protests, which then decreased during the Christmas and New Year holidays. Now the protesters are back in full force, an unnamed demonstrator told journalists. If the government is not replaced with a new one within 48 hours, they said, the actions will expand.

Currently, university professor Hassan Diab is in charge of forming the new government. He plans a government of technocrats, a strategy supported by the overwhelming majority of the population. It is questionable how the political power blocs in Lebanon — which have been divided according to religious affiliation since the 1975-1990 civil war — will react.

An alliance built around Hezbollah [the anti-imperialist Shiite-based organization]  had won the last parliamentary elections in May 2018. In the previous government there were four ministers close to Hezbollah. In order to preserve the religious proportion between Christians, Sunnis and Shiites, and to preserve peace within Lebanon, the Sunni Muslim Saad Hariri was again elected prime minister at that time, although he lost a lot of votes. When the protests began, Hariri resigned, and in the interim he has been an active supporter of the protest movement.

The population accuses the political leadership — which mostly agrees with the country’s financial elite — of having enriched itself with the people’s money. On orders from the central bank, banks have blocked private accounts with foreign currency – U.S. dollars and euros – and account holders are only allowed to withdraw a small amount in foreign currency per week. Transfers to foreign countries are prohibited, and transactions from abroad to Lebanon are also subject to the withdrawal ban.

On the morning of Jan. 15, Hamra was calm. Business opened as usual. The shattered windows at the banks were removed, new surveillance cameras were installed, damage was recorded. New protests were expected in the evening.