The Women’s March Global, set to take place on Jan. l8, will be the fourth such international protest since 2017 after the inauguration of misogynist/bigot-in-chief Donald Trump as president. Over 100 chapters and thousands of members are mobilizing for multinational, multigendered, multigenerational protests around the U.S. and in countries around the world on that day. 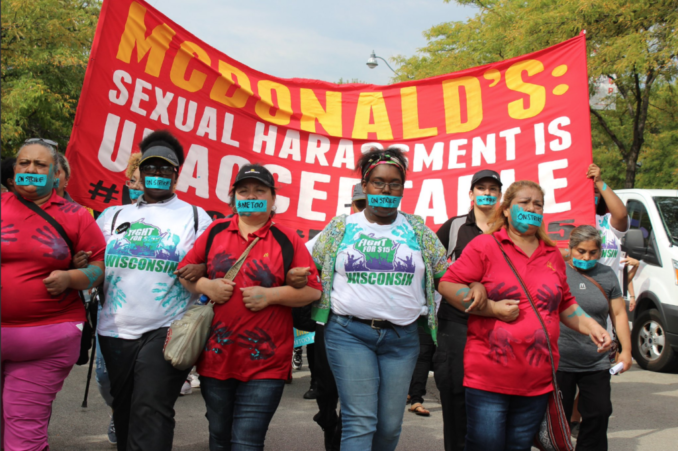 March leaders set an “intersectional platform” known as Global Unity Principles. They call for ending violence against women and rights for workers, immigrants, people of color, Indigenous communities, individuals with disabilities and LGBTQ2+ people. They include climate justice, too. They demand reproductive rights — now under vicious attack in the U.S., with the worst impact on oppressed women.

Another point of agreement among march organizers is opposition to all forms of racism and bigotry, including Islamophobia and anti-Semitism.

Workers World supports these principles and the movements which fight for them. The Me Too movement, founded by African-American leader Tarana Burke, has become a mass movement that includes job actions against workplace sexual abuse. The Fight for $15 per hour minimum wage and unionization continues. Although campaigns to raise the minimum wage have succeeded in 22 states, some workers are left out, including tipped workers, and many women, immigrants and people with disabilities.

Trump’s racist, xenophobic, anti-Muslim, anti-Semitic, misogynist, ableist, transphobic and homophobic bigotry is dangerous, as it inflames the ultra-right and endangers the safety — and the very lives — of millions of people, as it undermines their legal and human rights. Already, fatal attacks have led to many needless deaths.

Washington’s horrific war on im/migrants, especially those from Latin America, the Caribbean, the Middle East and Africa — with detentions, deportations, family separations and caging of children — cries out for solidarity and action. So does the occupation of oppressed communities by racist police, which endangers women, gender-oppressed people and their loved ones. So do hate crimes, including murder, being committed agains trans women of color.

All the bigoted vitriol, plus the Trump administration’s anti-worker, anti-poor stance, translates into reactionary measures that weaken people’s legal rights and cut vital, even life-saving government services, including health care and food programs. These attacks are particularly aimed at low-income and oppressed people, mainly women and children, seniors and people with disabilities.

However, it’s not just Trump and his cronies who push reactionary, racist ideas and policies. Underlying their venom is the ideology promoted by the richest individuals — the capitalist class — who seek to whip up hostility and divisions among workers and communities to prevent them from uniting to fight for their rights.

The richest 26 billionaires — most of them in the U.S. — own as much wealth as the poorest half of the world’s population. In their mad rush for super-profits, capitalists impoverish people around the globe, paying exploitation wages while fighting unionization and workplace safety. In their global search for oil, gas and minerals, they steal land and resources from Indigenous peoples and destroy ecosystems. They disregard ethical responsibility for human beings and the planet’s health.

A look at the impact of globalized capitalism (imperialism) shows that women are disproportionately affected; they comprise 70 percent of the world’s poorest people. Moreover, millions of women and gender nonconforming people must emigrate each year, leaving their families and homelands, to find jobs.

Imperialism causes endless war, as capitalists seek to grab countries’ resources and to attain political, economic, strategic and military domination of whole regions to exploit and control them. Washington has militarily occupied countries in the Middle East for years, as it seeks to oust noncompliant governments, install puppet leaders and beat out competing countries for the spoils. This is true in Latin America, Africa and elsewhere in Asia, too.

Today there is a serious threat of U.S. war against Iran. And the Pentagon refuses to remove its troops from Iraq, despite the population’s insistence that U.S. troops leave their country. Flouting the wishes of people in the region, Washington just sent an additional 3,500 soldiers to the Middle East.

Women and children are the hardest hit victims of war and occupation. Solidarity with our sisters in Iran and the rest of the Middle East is crucial. We must loudly insist: “No war on Iran! U.S. out of Iraq!”

WW calls for solidarity with our Palestinian sisters against the U.S.-backed militaristic, apartheid state of Israel. To express sisterhood with oppressed women who are living under the gun in their own homeland, with no legal or human rights, is not anti-Semitic, but a moral imperative.

We also express solidarity with women and their families — one-third of humanity — who live in the 39 countries under U.S.-imposed sanctions. A new campaign entitled “Sanctions Kill” opposes this form of economic warfare and calls for global actions March 13-15. (See sanctionskill.org)

While supporting the fight against women’s and gender oppression at home and abroad, let us also work together to take the movement to the next level — to strike at globalized capitalism —  the root cause of bigotry, the oppression of people of all genders and nationalities, inequity, poverty and war.

WW asserts there is a system that would prohibit all forms of discrimination and inequality. It would outlaw millionaires and billionaires, ban the enrichment of a few to exploit the labor of the majority, and use the wealth created to provide everyone with jobs, housing, education, medical care and nutritious food — and protect the environment. That system is socialism.