French President Emmanuel Macron’s government bet that the unions would grow tired, their members pinched by their loss of pay, and that public support would dwindle as travel to and from work became onerous, as their electricity flickered. But the government lost. 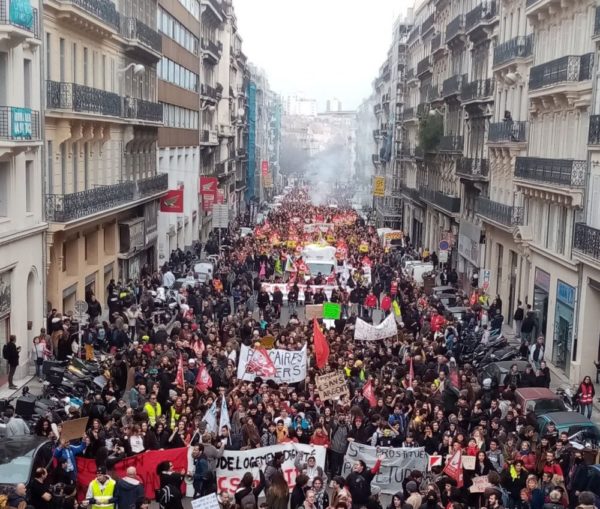 In response to massive protests Jan. 9 the French government offered a major concession. But the struggle continues, as does public support for the workers.

Workers at France’s Central Bank have decided that starting Jan. 13, they’ll stop supplying ATMs with money. At least one of France’s eight refineries has stopped producing fuel. General assemblies of workers at the other eight refineries are considering keeping their products from being distributed.

Many political analysts in France say that government intransigence over pension reform has led “reformist” unions like the CFDT (French Democratic Confederation of Labor) and Unsa (National Union of Autonomous Trade Unions) — which had collaborated with Macron — to withhold support from Macron’s government.  Militant unions like those in the CGT (General Confederation of Labor) and FO (Workers’ Force) have become more confrontational.

According to the CGT website, workers demonstrated in 216 cities and towns throughout France on Jan. 9, drawing nearly 1.7 million people to march in the streets. They protested the government’s plan to modify France’s retirement system.  The existing system has given France’s retired population the lowest poverty rate of European retirees.

The turnout on Jan. 9 was larger than that on Dec. 5 when the protests started. According to an official report published Jan. 6, the public strike fund for the CGT has received the equivalent of $2.2 million in contributions from 29,214 people all over France.  Other unions have also set up similar funds for online donations and local unions have passed the bucket at demonstrations and marches and on the street.

After the huge Jan. 9 demonstrations, Prime Minister Édouard Philippe announced that he was withdrawing plans to increase the retirement age to 64 in the bill he will present to parliament this spring.  This concession removes an obstacle to support from the reformist unions — a red line they were not willing to cross.

Prime Minister Philippe has already made similar concessions to the police, dancers at the Paris Opera, nurses, airline flight attendants and pilots.  Spokespeople for the CFDT and Unsa, welcoming his concession, remarked that it was clearly jerry-rigged and said other issues must still be negotiated.

The CGT and FO made clear that they are not interested in negotiating terms of a bill that they want withdrawn.  The current system certainly could be improved, with more attention given to the needs of women and low-wage workers, but the government proposal leads nowhere. Much of the financial pressure on the retirement system could be resolved by putting the wealth tax back into effect.

Class solidarity is behind the strong public support of the unions’ determination to defend France’s current retirement system, which consists of 42 distinct plans  reflecting the needs of workers in each plan. An interview with a commuter on the government-owned television chain France 2 illustrated this solidarity.

This commuter, a woman in her thirties, was spending 90 minutes longer to reach her job and 60 minutes longer getting home.  Her trip home was in a car jam-packed, like “sardines” — the camera showed the sweat on passengers’ faces. She arrived at her station, dark because striking electricity workers had shut off the power.  But as she waited for her bus ride home, she told France 2 she still supported the unions because they were fighting for everyone.