A 6.4 magnitude earthquake hit the Caribbean on Jan. 7, with the southern coast of Puerto Rico its epicenter. Then a 5.9 quake devastated the same area of the island on Jan. 11. According to the U.S. Geological Survey, in addition to these quakes, since Dec. 28, Puerto Rico has suffered over 1,200 smaller quakes and aftershocks, with more than 70 at least 3.5 magnitude. (AP, Jan. 12) 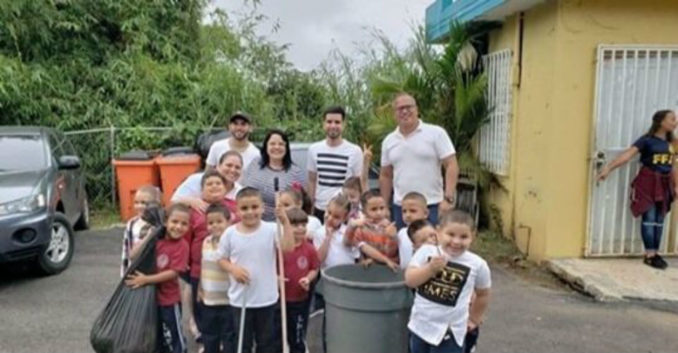 Escuela Rubías, in the western highlands of Puerto Rico, before the Jan. 7 earthquake hit.

Thousands of people are in shelters; hundreds of homes and schools are destroyed, with at least one person dead. Over 300,000 people have been without water and millions are left without electricity. Governor Wanda Vázquez estimated damage from the Jan. 7 earthquake alone at $110 million.People of the island are still struggling to recover from the 2016 devastation of hurricanes Rita and Irma. The U.S. Department of Housing and Urban Development has continued to withhold more than $18 million in hurricane aid. The New York Daily News reported Jan. 9: “The Trump administration is refusing to release all available disaster aid to Puerto Rico despite this week’s earthquakes, citing concerns about ‘corruption’ and ‘financial mismanagement’ on the island.

The only “corruption” is, in fact, the financial exploitation of the island by U.S. colonialism for over a century, exacerbated most recently by the PROMESA Act (Puerto Rico Management, Oversight and Economic Stability). Passed by the U.S. Congress in 2016, PROMESA was designed by capitalist power-players to “restructure debt” taken on by the Puerto Rican government so they could reap more profit through drastic austerity cutbacks to human services.

Starting in 2016, the people of Puerto Rico rose to protest this exploitation. Teachers and students began striking, joined by other workers, with mass May Day mobilizations. In 2019, an islandwide strike of millions of people, demanding economic and social justice, kicked out the existing governor and his staff. (Makasi Motema, “Puerto Rico strike: 12 days rattle the empire,” WW, July 30, 2019)

The dynamic self-organization of the Puerto Rico people in the face of “natural” and human-made disasters continues. Since the quakes began, Aurora Levins Morales, environmentalist and writer, has been reporting on her observations and efforts in the Indiera community on Facebook posts:

“Jan. 8 — Pretty much everyone is without power and many without water, something my people are experts at, but remember, power outages can be fatal for people with medical conditions that require equipment or refrigeration and caused many deaths post-Maria.

“The south coast towns nearest the epicenter, and nearest to me as well, have been hard hit, with many buildings badly damaged or collapsed.

“Up here in Indiera . . . today I was able to go out walking in the community and things are much worse than I thought. At least 6-7 houses have collapsed in the immediate area, but the worse thing, collectively, is that the store, which is the heart of this barrio, and the only source of groceries anywhere near, is damaged beyond repair. People have rallied around to build a tiny wooden store nearby for now, but without Don Liche’s colmado this community will fade away.

“We’re going to make sure it gets rebuilt. The help that does come to PR rarely makes it into the rural communities, so I want to make sure that this area gets some real help.”
Levins Morales is the daughter of distinguished Marxist scientist Ricardo Levins Morales. (See WW, April 15, 2016) Her Facebook post immediately after the first earthquake documents the community’s effort to sustain a school there:

“Escuela Rúbias is in the highlands of western Puerto Rico, in a coffee growing area economically devastated by Hurricane María. . . . [The school was] targeted for closure by the government, like so many others. The community organized, blocked the gates, and kept their school open, continuing to serve K-8 students.

“Escuela Rubías is essential for this community’s revival, but in order to secure its future, additional classrooms need to be built. . . . Help Escuela Rubias provide the kind of education Puerto Rican children need, for the future they deserve.”

For more information on sending aid and assistance to Puerto Rico, go to
facebook.com/auroralevinsmorales.