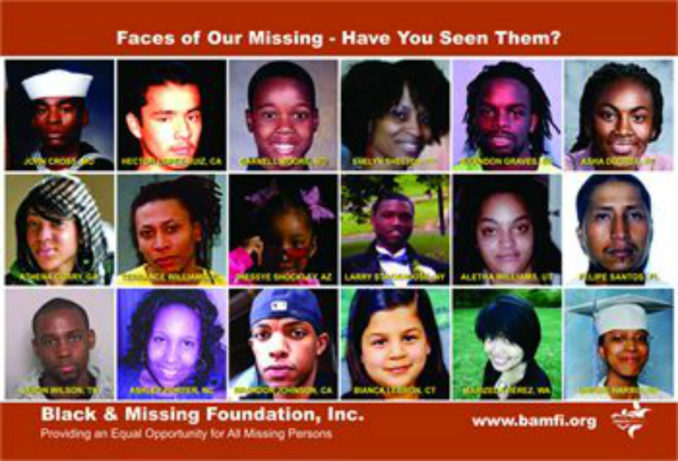 Although this fact may seem obvious because of systemic racism, statistics — or the lack of — detail a much grimmer situation.

The National Center for Missing and Exploited Children estimated in 2017 that, of 613,000 people who went missing, people of color made up about 60 percent.

Black people as a whole make up about 13 percent of the U.S. population. But in 2018, more than 30 percent of missing people in the country were Black. (tinyurl.com/sd6a6fx)

Despite the FBI claiming in 2016 that around 5,712 Indigenous women were missing around the country, the federal missing persons’ database at the Department of Justice has only 116 of those 5,712 women listed.

According to Ms. Magazine (Dec. 2), the very few statistics that do exist around Indigenous women show that 97 percent of Indigenous women who had faced physical and/or sexual violence were victimized by non-Indigenous perpetrators. (tinyurl.com/uznv49r)

Another concern for the loved ones of missing people of color is the lack of care by police departments.

Some people of color are hesitant to call the police after a loved one goes missing, for fear of unintended consequences because of the long history of racism by police departments.

For example, some im/migrant families hesitate to call the police because they fear being reported to Immigration and Customs Enforcement.

Police departments are also quick to label missing people of color as runaways, despite no evidence pointing toward disproportionate numbers of people of color “running away.” A significant number of missing children of color are homeless or in foster care and may end up in sex-trafficking rings, according to Natalie Wilson, a founder of the Black and Missing Foundation.

Media coverage of missing people of color is also a reflection of the entrenched racist system that police adhere to. Only about one-fifth of the 30 percent of Black people missing nationwide is covered by the news, according to CNN.

In a 2015 study exposing the coverage of missing children, media only made reference to missing Black kids about 7 percent of the time. A similar study centered around Indigenous women shows that very few cases of missing Indigenous women are covered on the news.

Economic factors play a role in the lack of attention as well. Some families of color may not have the resources to hire a private investigator to search for their loved one after police do a poor, or no, search. The economic necessity of having to go to work to keep a job also allows for less time that a working-class family member could be searching.

One response to this alarming situation would be for concerned communities to make the issue of missing people of color a key part of their plan to combat racism at a local level.