On New Year’s Eve, Cleveland City Councilwoman Dona Brady looked out her upstairs window at demonstrators outside her home. A noisy group was holding a vigil and chanting, “Who’re we out here for? The homeless.” 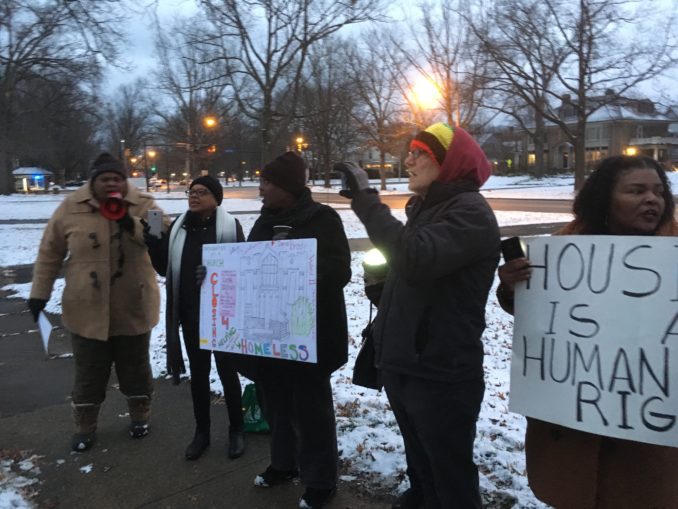 Councilwoman Brady has attempted to prevent the progressive Denison United Church of Christ, located in her Ward 11 on the West Side, from providing shelter to homeless Clevelanders.

Since 2011 the Metanoia Project has provided overnight respite and other services to homeless people in Cleveland. Besides shelter, its services include meals and counseling to those whose personal traumas are barriers to staying in traditional shelters. After Metanoia’s original home in St. Malachi’s Church lost bed space this year, Denison UCC opened its doors to the homeless.

With many low-income parishioners, Denison UCC has been struggling to make its building compliant with city building and fire codes. Rather than assist the church and Metanoia in meeting the legal requirements to become a safer place for homeless people, Councilwoman Brady has taken a mean-spirited attitude that caters to gentrifiers moving into this mixed-income community. Citing code violations, she first attempted to prevent the church from providing shelter and, most recently, has moved to take away its designation as a church.

As Executive Director of the Northeast Ohio Coalition for the Homeless Chris Knestrick wrote in a Jan. 1 op-ed in the Cleveland Plain Dealer, Brady “has turned down every invitation to discuss the issue, is resorting to ‘Not in my backyard’ tactics in the Denison neighborhood, which only perpetuate the history of segregation and racist housing policy in Cleveland.” This “history of segregation” refers to the division between the East and West Sides, divided by the Cuyahoga River, with African Americans concentrated on the East Side.

Because of the special trauma-sensitive services Metanoia provides, combined with general overcrowding in existing shelters, Brady is putting homeless people at risk of freezing to death in Cleveland’s brutal winter. Homeless advocates are not exaggerating the danger: 65-year-old Juan Procter was found frozen to death last January inside an abandoned house, after two days when temperatures fell before zero.

On Jan. 5 supporters of the homeless will demonstrate outside City Hall and then pack the weekly City Council meeting.