Elections held Dec. 12 in England, Scotland, Wales and the occupied north of Ireland were a boost to Trump protégé and Conservative party leader Prime Minister Boris Johnson. Voters elected 365 Conservative Members of Parliament to the House of Commons, giving Conservatives — the Tories — the majority needed to reappoint Johnson Prime Minister. The Labour Party, which had taken more left-wing positions under the leadership of Jeremy Corbyn, lost 60 seats.

Johnson’s primary appeal was a promise to “get Brexit done.” Brexit — British exit — is the withdrawal of England, Scotland, Wales and the occupied north of Ireland from the European Union. Brexit, which passed narrowly in 2016, will make it more difficult for immigrants to enter Britain via continental Europe, whether or not they are EU citizens. Since the 2016 vote, hate crimes against immigrants, especially immigrants of color, have increased.

Just days before the election, Johnson promised to “bear down on immigration” by only granting limited stays to “unskilled workers,” while welcoming those with “exceptional talents” like “violinists, nuclear physicists, prima ballerinas.” This thinly veiled catering to racist stereotypes was rightly tagged “an anti-immigration dog whistle from a prime minister blaming migrants for homegrown problems” by the3million, a support group formed by EU immigrants after the 2016 Brexit vote. (The Independent, Dec. 9)

The Prime Minister has made more blatantly racist comments, even employing racist slurs against Black people. The pro-Tory vote, like the pro-Brexit vote three years ago, is a racist vote. Whatever the various reasons for working-class voters to hate the EU, overlooking racism is itself a racist act.

As Workers World Party First Secretary Larry Holmes stated after the first Brexit vote: “You cannot separate the vote to leave the EU from the racist, anti-immigrant campaign that was central to it.” (Workers World, July 4, 2016) That clearly distinguished Brexit from legitimate leftist opposition to the EU, whose rules mandate austerity and could, in fact, be used to block Corbyn’s progressive economic programs. 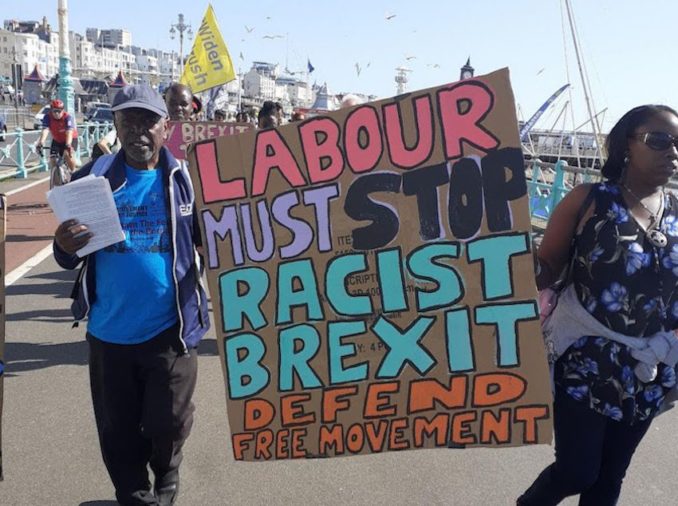 Johnson’s biggest gains were in traditional Labour strongholds in England’s north and “Midlands.” These primarily white working-class communities have been devastated by mine and factory closings.

Labour Party moderates have jumped on the anti-Corbyn bandwagon, blaming his left turn for Labour’s losses and slandering him as “anti-Semitic” for criticizing Israeli apartheid. Corbyn has said he will resign as party leader.

Democrats in the U.S., including presidential candidate Joe Biden, are citing the British election results as evidence that their party needs to move toward the center. Will this narrative be used to marginalize the party’s more progressive wing, including four courageous Congresswomen of color known as “The Squad”?

‘Not my prime minister’

While the capitalist media — including the notorious British tabloids — are calling the vote a Conservative “landslide,” young people are already in the streets raising the slogan “Not my prime minister.” A poll before the election showed a majority of voters under 35 supporting Labour.

Johnson does not have overwhelming popular support. The Tories received 43.6 percent of the popular vote. With a voter turnout of 67 percent, that’s less than 30 percent of all eligible voters. Many immigrants, who now face more hate crimes and discrimination, could not vote.

Having become the party of white supremacy and xenophobia, the Tories made gains at the expense of the ultra-right United Kingdom Independent Party and Brexit Party, which won no seats at all. Compared to the 2017 Tory popular vote, this time it only rose by about 330,000. Labour lost most of its votes to anti-Brexit parties, including the Green, Liberal Democrat and Scottish National parties.

Conservatives were pushed back in Scotland and the north of Ireland. The SNP won 48 of 59 seats, a gain of 13. The pro-nationalist Sinn Fein retained its seven seats, while the Social Democratic and Labour Party took two seats from the anti-nationalist Democratic Unionist Party, who helped the Tories form the last government. This is the first nationalist — that is, for a united, independent Ireland — majority since the 1921 partition of Ireland. (euronews.com, Dec. 13)

“The majority of people here voted to remain and they see Brexit as something that is very unfairly being imposed upon them,” said Sinn Fein’s John Finucane, who defeated DUP’s Nigel Dodds in South Belfast.

Brexit is also unpopular in Scotland. SNP leader Nicola Sturgeon has called for a new referendum vote on Scottish independence, claiming the imposition of Brexit has led to increased support for independence, after a narrow majority voted to stay with Britain in 2014.

Johnson immediately voiced his disdain for Irish and Scottish self-determination, stating: “At this stage it does look as though this one-nation Conservative government has been given a powerful new mandate, to get Brexit done and not just to get Brexit done but to unite this country and take it forward.” (Reuters, Dec. 12)

The Labour Party — progressive but reformist “democratic socialists” — has suffered a setback. But Marxists understand that class struggle is the driving force of history. The coming attacks on the workers and oppressed living in England, Wales, Scotland and Ireland will meet mass resistance. The protests will grow.

What else must revolutionary socialists keep in mind going forward?

Workers World Party founder and late Chairperson Sam Marcy stated in a 1972 document, a statement he repeated often, “The acid test for a revolutionary workers’ party is its position on the national question.” To deny the centrality of racism, xenophobia and occupation — national oppression — in analyzing Brexit and the Tory advances is to fail that test.

Now is the time to build global, multinational class solidarity on both sides of the Atlantic.