Nov. 22 — After three weeks of organized sit-ins and protests, students at Syracuse University have succeeded in getting the school administration to admit it must take measures to end a recent flood of white supremacist graffiti, vandalism and threats on campus. 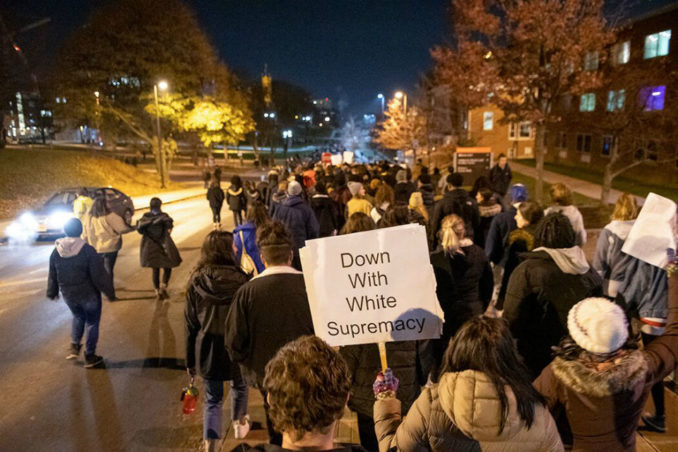 On Nov. 20 students walked out on SU’s chancellor, who had refused their demands, and marched to his house in protest, chanting “Sign or resign!”

Students at SU have been actively organizing since 2014 against both structural discrimination and individual acts of bigotry. Most recently, they formed a coalition, with African-American leadership, under the slogan #NotAgainSU, to protest white supremacist actions on campus that began in early November.

A flood of racism — and protest

From Nov. 7 through Nov. 21, multiple instances of racist graffiti aimed at Black, Asian and Indigenous people appeared in dormitories and classroom buildings, along with violent vandalism linked to the slurs. Nazi swastikas were placed at on- and off-campus student housing, while an SU professor received an anti-Semitic threat referencing Holocaust death camps. At a campus bus stop, a large group of students yelled the N-word at a Black female student waiting there. Eighteen separate incidents were reported during those three weeks, with others possibly unreported.

Chancellor Kent Syverud and the SU administration did not alert the campus until four days after the first threats and continued to delay responding — for instance, failing to acknowledge the threat to the professor who felt she had to leave campus for her safety. According to the independent campus newspaper, The Daily Orange, Syverud denied that the reason the university had covered up initial reports of racist graffiti was because SU was launching a $1.5 billion fundraising campaign.

The incidents continued, and at one point word spread that student computers had been “air-dropped” with the Islamophobic manifesto of a shooter who had massacred 51 people at two mosques in New Zealand. (Air-dropping is a social media technique that only works if the sender is in close physical proximity.) Some students and faculty, alarmed for their safety, began to leave campus.

Other students, incensed at administration foot-dragging at these clear indications of danger, began to take action. In addition to multiple protests, #NotAgainSU began a sit-in at Barnes Center at The Arch Nov. 14. Students posted 18 short- and long-term demands for public discussion.

The demands included expulsion of students responsible for the graffiti; requiring faculty and staff to undergo diversity training; establishing a housing portal where students can pick roommates based on mutual interests and identities; allocating $1 million for a curriculum to educate about diversity issues, specifically anti-racism; and the resignation of Chancellor Syverud if the demands were not met. One demand — that racist language and action be made punishable under the Student Code — had been refused by Syverud in 2014, along with other similar student demands.

The demands posted at the Barnes Center ended with a blank line and an arrow pointing to where Syverud’s signature was expected.

Across the campus, statements of support for the students were issued by a range of academic departments and organizations, from a letter by the Sociology Graduate Student Association, published in the local Syracuse newspaper, to a campuswide call issued by the Department of Women’s and Gender Studies. Students from SU’s College of Law and SUNY-Upstate Medical School marched on campus in support. 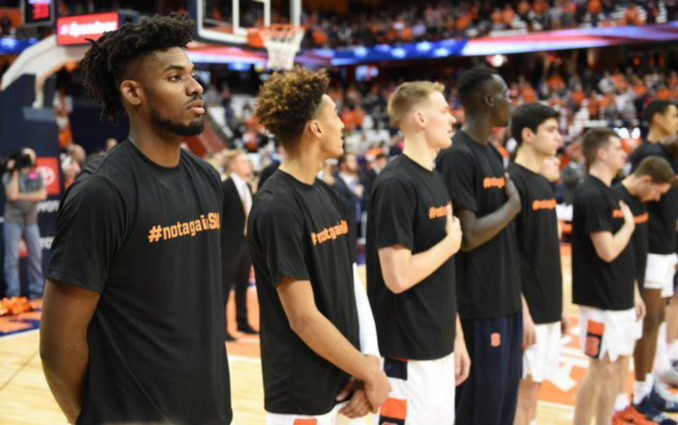 Every member of the men’s basketball team wore #NotAgainSU warm-up shirts before their Nov. 20 game, keeping the shirts on until after the national anthem. Star Elijah Hughes said: “[As a team] we want to let [our fellow students] know we recognize them, and we’re supporting them. Being a man of color in this country, in this world, whether it’s on a campus or in a big city, it’s hard. It’s just hard. There’s no other way to say it.” (syracuse.com)

Action came to a head on Wednesday evening, Nov. 20, when over a thousand angry people crowded Hendricks Chapel at a community forum to demand Syverud meet the demands. Women students of the local Onondaga Nation — whose land the university occupies — opened the forum in their language with a statement of full solidarity with the organizing efforts. African-American leaders summarized the last four years of student organizing against bigotry and discrimination and repeated the #NotAgainSU demands. 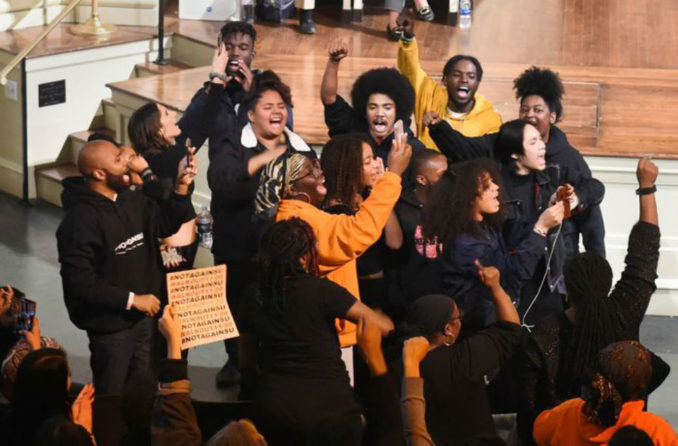 Syverud took the podium and began some tentative remarks. When a student questioner then called out, “Will you sign?” he replied he would not sign without some modifications.

Outrage erupted, and a mass student walkout exited the chapel, chanting “Sign or resign!” Students then marched to the chancellor’s house, protesting there for several hours.

By the morning of Thursday, Nov. 21, Syverud had signed the demands, with three “technical” modifications. He did so without meeting further with student leaders, who voiced their disagreement with that “resolution.”

A #NotAgainSU twitter statement posted on Nov. 22 announced: “Despite Chancellor Syverud signing 16 out of [our] 19 demands, #NotAgainSU will be continuing our call for the resignation of Syverud, [Department of Public Safety] Chief Bobby Maldonado, DPS Associate Chief John Sardino, and Senior Vice President for Enrollment and the Student Experience Dolan Evanovich.”

Years of resistance at SU

The current high profiling of student protests reflects the bourgeois power struggles that are both local and also involved in the run-up to next year’s presidential election. The protests have received wide attention internationally and in the U.S. press — from the New York Times front page to Teen Vogue. New York state Gov. Andrew Cuomo held a press conference to denounce racism at SU, the FBI was called in to investigate and the mayor of Syracuse announced an inquiry into local racist graffiti. Meanwhile, the SU Board of Directors voted full confidence in Syverud, reflecting the school’s rightward administrative trend. In 2017 SU accepted a $1.75 million donation from the ultraconservative Koch Brothers for its Whitman School of Management.

But the struggle at SU against racism — and against a range of discriminatory acts against women, LGBTQ+ people, people with disabilities and others – has been going on for a long time. Before Colin Kaepernick, the “Syracuse 8” — African-American members of the school’s football team — boycotted their 1970 season because of racist discrimination at SU.

In 2014 a student coalition organized as The General Body occupied the school’s administration building for 18 days, after Chancellor Syverud closed an advocacy center for students who had been raped or assaulted in domestic relationships and cut funding for low-income students. (For more on this history, see thegeneralbody.org.)

In 2018 the Recognize Us coalition was formed after the leaked release of incidents at Theta Tau fraternity that involved members miming the sexual assault of a person with disabilities; swearing an oath to hate Black, Latinx and Jewish people; and mocking LGBTQ+ people. (For a list of the coalition’s demands, see tinyurl.com/uuarsn2/.)

The #NotAgainSU demands repeat many of those made in these previous struggles. Some members of the 2014 The General Body gave this advice to the current SU organizers in a Nov. 19 open letter: “Do not settle for listening meetings, carefully crafted emails, videos or invitations to workgroups. Do not settle for the administration bending on the least significant of your demands while ignoring the rest. You deserve immediate and significant action on problems many years in the making, including new leadership.” (tinyurl.com/qk7v6ee)

Student organizers are passing strategy and goals along to each other and vowing to fight on. The resistance continues at Syracuse University.