During Oct. 23-27, Burgerville Workers Union, based in Vancouver, Wash., and an affiliate of the Industrial Workers of the World, struck four Burgerville stores for four days, forcing the company to return to the bargaining table. BVWU is the first-ever fast food workers union in the U.S. 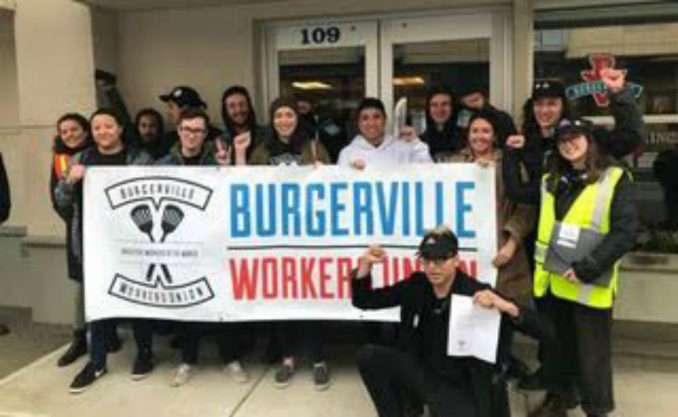 Members of the Burgerville Workers Union

This was the second BVWU strike since 2017 when the union forced the company, through a three-day strike, to recognize it.

During recent contract talks, Burgerville refused to negotiate an across-the-board wage increase for all workers after saying it would. The company had claimed it had allocated $3 million for the wage increase, but in reality this claim was only made to comply with Oregon’s state minimum wage law.

Because of the company’s bad faith in negotiations, on Nov. 11 BVWU called for a boycott of all 41 company stores in the Pacific Northwest. The union’s main demand is an across-the-board increase of $5-an-hour for all workers. The average take-home pay of a Burgerville worker is $900 a month, regardless of the size of the family, while the poverty level is $1,200 for a family of one.

Other issues that the BVWU wants changed are the company’s racism, anti-immigrant policies, unfair labor practices, health and safety violations, and scheduling. The all-white management at the Portland Convention Center store, in a move considered by BVWU as not only racist, but union busting, fired three workers of color who are all pro-union.

The company also refuses to opt out of E-Verify, a federal spy program to check workers’ im/migrant status. In the last year alone, the union has filed 36 labor violations against the company, and there are many Occupational Safety and Health Administration and other U.S. Department of Labor violations. Meanwhile, the average worker’s hours are precarious — only 30 hours a week with erratic scheduling.

BVWU states on its website that, though the boycott has wide support, it aims to build worker solidarity among the 4 million low-wage workers in the fast food industry, and also among all workers in the U.S. and globally. (tinyurl.com/yx2q37sj/)

Members of the Laborers, Iron Workers and Carpenters unions came to a recent BVWU strike picket line with a charcoal grill, offering to make “Burgers for Boycotters.” Union supporters also include the Service Employees local whose 10,000 members recently threatened a strike and forced significant concessions from health company giant Kaiser-Permanente, and the Food and Commercial Workers (UFCW) local that represents 25,000 grocery workers, who recently won significant contract gains by threatening to strike.

In fact, inspired by the BVWU, organizing among fast food workers has increased in the Portland/Vancouver metro area, including workers at Little Big Burger, a fast food chain with stores in Oregon and North Carolina. In March those workers announced the formation of the Little Big Union, and their first demand was a $5- an-hour raise.

At Grand Central Bakery, a Northwest Pacific restaurant chain, 400 workers joined the Bakery and Confectionery Workers (BCTGM) and have petitioned the National Labor Relations Board for recognition. Restaurant workers at the Oregon Zoo have joined the Laborers union. In September, with help from the IWW, 13 workers at Scotties Pizza petitioned the NLRB to have their union, Scotties Pizza Workers Union, recognized.

Lewis is a retired member of Food and Commercial Workers (UFCW) Local 400.