On Nov. 16, 1989, six Jesuit priests, their housekeeper and her 16-year-old daughter were murdered by a special battalion of Salvadoran soldiers whose leadership was trained at the School of the Americas housed at Ft. Benning in Columbus, Ga. This atrocity was just one of many being committed by the right-wing government against social justice movements in El Salvador. 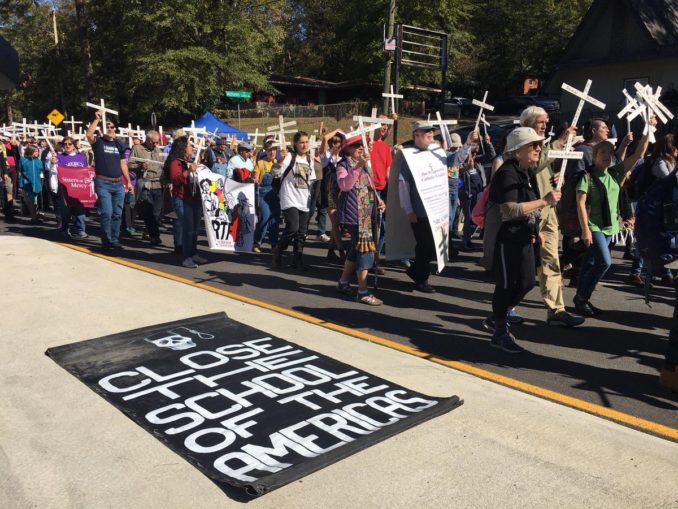 The 1989 massacre prompted the establishment of SOA Watch, a grassroots organization dedicated to exposing the role of the U.S. government in maintaining oligarchic structures throughout the region for the benefit of U.S. corporations. The following year the first march to shut down the School of the Assassins — as it is known in Latin America — was held at Ft. Benning. Over the past 30 years, tens and tens of thousands of people, many coming back year after year, have marched, sung and committed various acts of civil disobedience to bring attention to the criminal legacy of the SOA.

This year, from Nov. 15 to 17, veterans of this struggle were joined by high school and college-age youth to continue the campaign to close the SOA. There were nightly vigils at the concertina-wired gates to Ft. Benning, a day-long series of panels and discussions, and the Sunday processional with the solemn intoning of the names and ages of victims killed in the violence instigated by SOA-trained military.

The SOA, a military training facility founded in 1946 as part of the U.S. Cold War foreign policy to deter any threats to imperialist domination of the region, over the years established relationships with key figures in the armed forces of South and Central American countries.

The list of SOA graduates who engaged in massacres, assassinations, torture and disappearances of Indigenous, union and community leaders, and who launched coups and became military dictators, is long. From El Salvador, Honduras and Guatemala to Argentina, Brazil, Chile and Colombia, there is an SOA connection to the repression and brutality committed against the masses of people.

The knowledge that at least seven leaders of the coup in Bolivia against democratically elected Indigenous President Evo Morales were SOA graduates — such as General Williams Kaliman Romero who trained at SOA in 2003 — underscored the continuing need to win the demand: “Close the SOA!”