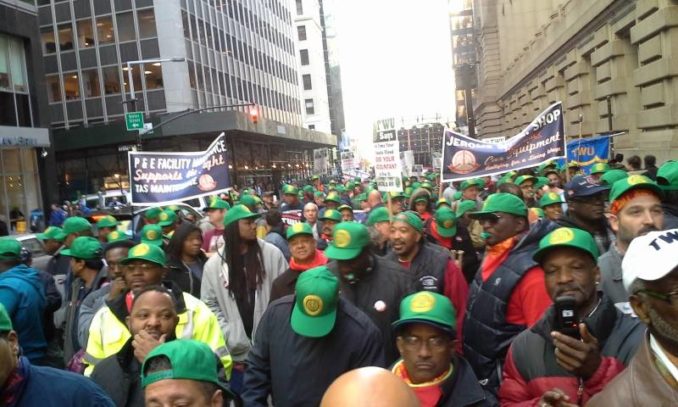 Many transit workers carried flags that read, “We move New York.” Signs called for safe working conditions and job security. The workers sent MTA Chairperson Pat Foye a clear, strong message on signs with the slogan: “We want a contract with no givebacks!”

TWU Local 100 members have been working without a contract for six months — and they are angry. There was talk of striking, and the chant, “If there’s no contract, shut it down!” resonated throughout the crowd.

A band was on the stage in the middle of the street. Workers banged on drums and shouted through bullhorns. The noise created a raucous, militant atmosphere.

TWU International President John Samuelsen proclaimed, “This is the biggest rally Local 100 has ever had in my time here.” (New York Daily News, Oct. 30)

From the stage, TWU Local 100 President Tony Utano stressed that workers for the Long Island Railroad and Metro North are also working without a contract, as are TWU members. This writer heard Utano say, “We are one!” several times.

Utano said transit workers “move New Yorkers seven days a week, 24 hours a day, 365 days a year.” He stressed: “We bailed the MTA out when the subway was failing. We put it back together.” Yet, the MTA “never has any money during contract time.”

Public Advocate Jumaane Williams told the workers that the New York City Council supports them and that they are indispensable to the city.

Elias Maysonet, Local 100’s vice chair of Brooklyn’s Pitkin Yard and a subway car cleaner, stressed: “We’re in a billion-dollar city and all we want is a living wage. We could stop the city if we wanted to, and maybe we will!”

No givebacks to MTA!

The transit workers’ contract expired May 15. Since then, the MTA brass has called for a 2 percent raise — but with a 2.5 percent increase in health care costs for each member, which would result in a net giveback of 0.5 percent per worker.

MTA management also seeks to change overtime pay from being counted after eight hours of work in one day to being calculated after 40 hours of work in a week (the federal labor law minimum standard) — a big giveback. Furthermore, the MTA wants the ability to change sections of the contract if supervisors decide that workers take too much time off.

TWU Local 100 has a history of militancy. As public sector workers, they are bound by the New York State Taylor Law, which makes it illegal for them to strike. But when they successfully struck in 2005 to protect their pensions, the strike chipped away at the Taylor law.

People’s MTA activists attended the rally. Their signs, which read, “We support TWU Local 100,” were met with raised thumbs and fist pumps. The organization’s members attend MTA monthly board meetings where they demand that funds be used to build more elevators in stations, not to put police in the subways.