October 25 was declared “A Day of Action”  by the South African Development Community to end the economic sanctions on Zimbabwe.  SADC is comprised of 16 countries in the Southern African region. These sanctions — an act of war imposed by the U.S. and other Western imperialist countries 20 years ago — have caused great suffering and hardships on the Zimbabwean people and their economy.  The December 12th Movement organized a support action on Oct. 25 with a march and rally starting at the U.S. Mission to the United Nations and ending at the Zimbabwe Mission. Giving a solidarity message at the rally was Stephanie Hedgecoke, an Indigenous member of Workers World Party.  Below are her edited remarks. 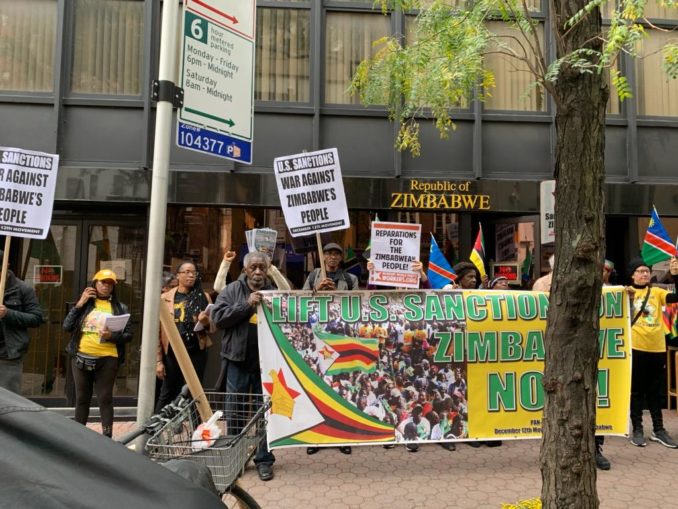 We stand together on stolen land, the Lenape homeland, in a country built on stolen nations, to say: Stop the illegal, murderous sanctions on Zimbabwe and on the Indigenous peoples of Zimbabwe.

Today even the health of our Mother Earth is under threat by the same forces that stole the lands from the Indigenous peoples in Zimbabwe.  Indigenous nations around the world share this history of genocidal assault and capitalist larceny that has built the wealth of the banks. All the riches the imperialists possess — it’s all stolen.

But the Indigenous peoples of Zimbabwe took their lands back, and only they have the sole and absolute right to determine any and all issues of development on their own lands — not the banks, not the corporations, not the International Monetary Fund, not any settlers!

Workers World Party recognizes the sanctions on Zimbabwe as an illegal war on the people to wreak harm on the people and their lands and erase the right of self-determination. Zimbabwe is owed reparations by the banks and the settlers, who have profited from this past assault and seek to, again, gain control of what is not, and never was, theirs through economic warfare.

These forces see our Earth only for what they can ransack and pillage, and then they use our air and water, the atmosphere and oceans, as dumping grounds. We stand in solidarity with the youth of the world to say: This has to STOP.

In solidarity with the December 12th Movement, we are with Zimbabwe to demand the sanctions, the economic warfare, be ended.