Oct. 11 − Today, after nine days of the people’s uprising here, Ibarra was again without buses or taxis, and many people were lugging heavy bundles of food through the streets. Classes at the schools have been suspended for seven days, and a view out the window showed only a cow walking along the street. 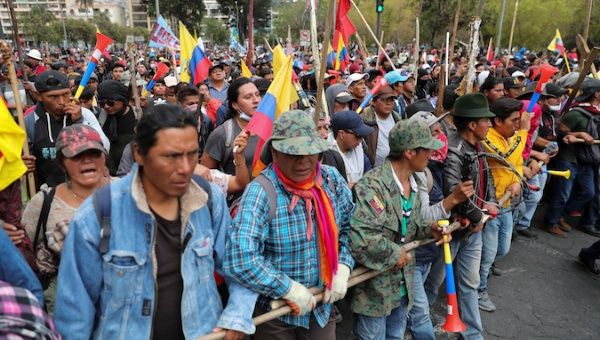 Most information came from individual conversations face-to-face or on the phone. A community leader in the nearby besieged town of Esperanza said Oct. 9 that the military shot tear gas projectiles directly at the comuneros [large group of  united Indegenous people] confronting them, causing serious injuries. Betty Romero from the Ibarra City Council delivered food to the people there.

The struggle is hard, but as Carlos Aznárez wrote in Resumen Latino Americano this week, “Ecuadorians are a tough nut to crack.” The Caranqui people who populate Esperanza are proud of their ancestors who have a history of resistance.

Another Indigenous man who travelled 60 miles to Quito with members of his community near Otavalo said that the Salesiana Polytechnical University has given refuge to him and more than 1,000 other people. He said that the people in struggle definitely need food supplies.

Ibarra residents responded to an Indigenous request and are collecting goods for the people in Quito. Ecuadorians from as far away as New York said they are contributing money in solidarity.

The same Indigenous woman who led a ceremony Thursday night, Oct. 10, at the Obelisco in honor of martyred leader, Inocensio Tucumbi, was in the historic center of Ibarra the next day collecting contributions of food, items of personal hygiene and blankets for the Indigenous resistance in Quito.

A self-employed grandmother of seven who lives in Quito, who was a supporter of the former government led by Rafael Correa and who survives precariously in the informal economy, said that the police viciously beat her, causing severe back injuries. She is being attended by family and is unable to rejoin the uprising.

A middle-class friend who lives in Quito near the Salesiana University said that she is not in the streets but is helping deliver food to the marchers. She said she looks up to the Indigenous people as the heart of the resistance. A former supporter of Correa, she questions the motives of all the political parties, left and right. This view is common among people in the fragmented left.

In a discussion with local residents in Ibarra, this woman said that the reason President Lenin Moreno bowed before the International Monetary Fund was that he was desperate for the loan: He had manufactured an economic crisis in Ecuador by forgiving the rich billions of dollars in taxes. All present shouted agreement with her observation.

Billions of dollars are now fleeing the country, only to be hidden in financial paradises and tax havens like the United States. Analysis presented on confirmado.net reiterates what several Ecuadorian economists have noted. Ecuador’s return to neoliberal policies under Moreno will lead “in the medium term” to “dismantling national industry, science and technology innovation” and those who benefit will again be “the big importers, exporters, bankers and transnationals.”

Confirmado.net added: “Several studies recognize that the adjustment measures proposed by the IMF leave a sequel of inequality, reduction of economic growth, increase of poverty, deterioration of working conditions, and the destruction of peace and social welfare.” (tinyurl.com/y5xravbh)

Indigenous leaders in Quito are calling for comuneros in the Amazon region to shut down oil wells or block the transport of crude oil, which represents 29 percent of Ecuadorian exports. Some 31 percent of the oil is exported to the United States, according to Observatory of Economic Complexity.

Diario El Comercio (Quito) reported that many food vendors and shops in the main coastal city Guayaquil are closed because the highways to the Andes are blocked, preventing the daily supply of vegetables, eggs and dairy products. Vendors who have produce to sell have doubled their prices.

Radio Pichincha reports that the major bus terminal in Quitumbe in the south of Quito is only selling tickets for travel in one direction: to the coast. No buses are travelling north-south in the Andes or east to the Amazon. Losses amount to $5 million per day.

The National Federation of the Chambers of Industry is reported to be calling for emergency action by the state armed forces to impose what it calls “law and order”: open the highways and prosecute the insurgent people, who it calls “the perpetrators, accomplices and collaborators, and the material and intellectual authors of the crimes that have been committed.”

The title line of an Oct. 10 article in Resumen Latino Americano speaks volumes about a president who is out of touch with the people while the national police are apparently out of control: “Lenín Moreno spoke, offering dialogue, and a few minutes later his police brutally attacked the crowd peacefully surrounding the National Assembly/Numerous wounded and asphyxiated by the gases.”

According to CONAIE, the Indigenous coalition called the general strike along with the union movement. Since Oct. 2, five people have been killed in confrontations with the army and police, 554 were wounded or injured, and many more have disappeared.

It is possible that the U.S. is advising the police in Ecuador on how to repress the masses of people. An article in Diario El Universo from April 4 reported that the U.S. and Ecuador had signed a security agreement that includes technical assistance and allocation of resources.

So far the government’s brutal repression and its attempts to criminalize what should be constitutionally protected resistance have failed. The uprising continues to grow.