Nearly 7,000 workers at Oregon Health and Science University won raises and other improvements when ratifying a new three-year contract by 98.9 percent on Sept. 9. Members of American Federation of State, County and Municipal Employees Local 328 get a lump sum bonus payment of $1,000 and a raise of 3.25 percent now, plus an additional 3 percent on July 1 in 2020 and 2021. Workers also get 50 cents more an hour for weekend work and $1 more an hour for training co-workers. OHSU also agreed to a yearly contribution of $100,000 to an employee hardship fund managed by Local 328 that will provide relief for needed food, transportation, housing and education.

Meanwhile, Local 328 has a legal case against OHSU: an unfair labor practice charge filed Aug. 8 with the Oregon Employment Relations Board. OHSU violated its duty to bargain in good faith when two members of its team used fake Twitter and Facebook accounts to pose as employees and undermine the union on social media. A hearing was scheduled for Oct. 1. (NW Labor Press, Sept. 18)

The two-year contract includes a 3 percent raise retroactive to July 1 and a 2.1 percent raise on July 1, 2020. It gives an additional 2.5 percent increase on Nov. 1 to workers with at least five years seniority, who are at the top of the pay scale for their classification. Local 503 reported it’s the largest cost-of-living raise that university support workers have received in more than a decade.

Not only did the university system back off on a proposal to increase workers’ contributions to health care, but it also dropped a proposal to charge low-paid University of Oregon food service workers more for their shift meals. And it agreed to allow 48 hours of paid leave if campuses are shut down because of inclement weather. (NW Labor Press, Oct. 2) 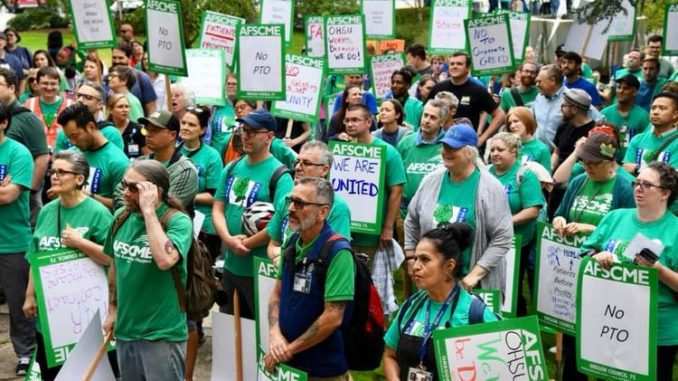 The “Building a Better Early Care and Education System Act” was co-sponsored by two unions: the Service Employees union (SEIU) California and the American Federation of State, County and Municipal Employees. Workers won the ability to unionize and bargain collectively with the state Department of Human Resources. That gives child-care providers the ability to organize for improvements on the job, while setting the stage for the largest union election and organizing campaign in the country for better wages and benefits, retirement planning and training. The bill empowers the unions to contact workers around the state so they can attend worker orientation meetings. (Sacramento Bee, Sept. 30)

Assemblymember Monique Límon, who authored the bill, says the victory is “especially [for] women, who are the great majority of the child care workforce in our state.” (Asian Journal, Oct. 4) California becomes the 12th state where child care workers can unionize when the law takes effect Jan. 1, 2020!

Over 120 low-wage workers converged in Durham, N.C., on Sept. 14 to organize and unite the working-class movement. The Worker Power Summit was hosted by NC Raise Up/Fight For $15 as part of its seven-year organizing effort. It featured workshops on the connections among poverty wages, racism and the history of union suppression in the South. (WITN.com, Sept. 14) Writing in Facing South magazine, Rebekah Barber witnessed how attendees made it clear it’s “not by accident that the country’s poorest region is also where states have historically made it hard to organize and collectively bargain.” (Sept. 19)

Some attendees reported how bosses keep people of different races separated at work to discourage racial solidarity. Keynote speaker MaryBe McMillan of the N.C. AFL-CIO raised how systemic change in the U.S. won’t come from Trump or any person vying to be president. It will come through “uniting and building a bigger, bolder labor movement.”