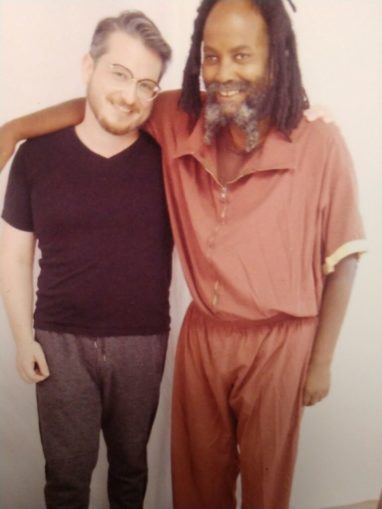 “If you haven’t noticed,” Mumia said to me as he leaned over and flashed me his wry grin, “I’m a frustrated professor.” His expression was warm, but his tone was earnest. “A professor without a chair.”

Mumia Abu-Jamal holds office hours in the visitors’ room of SCI Mahanoy, not in some university faculty building. There are no alabaster busts adorning the walls.  Despite the fact that we were in rural, white Pennsylvania, most of the faces around us were Black and Brown. Mumia did not have a big mahogany desk in front of him, but he did have a plastic tray on his lap with lunch — a ham sandwich and a slice of cheesecake from the vending machines where MOVE Minister of Confrontation Pam Africa bought them.

Lucky for his students, Mumia does not need a sturdy bookshelf close at hand full of weathered tomes to reference the history, law and quotations he means to impart. They’re in his head. From the time we shook hands to the time we sat down and started eating lunch, Mumia had already taken me on a tour of 19th century Haiti, mobbed-up Prohibition-era Philadelphia, and Florence, Italy, when it was under the domain of the Casa de Medici. Mahanoy staff don’t let visitors bring in pad and pen to take notes, so one has to train their memory to be as good as the Professor’s.

Of course, that Mumia Abu-Jamal is brilliant should come as a surprise to no one because this former Black Panther, former president of the Philadelphia chapter of the National Association of Black Journalists, and prison activist is one of the most important political theorists of our era. His two most recent books are part of a series co-written with Stephen Vittoria called “Murder, Incorporated,” a sharp, plainspoken history of the ongoing atrocity that is U.S. imperialism. It’s some of the best history written from a Marxist, anti-imperialist perspective. (And I have it on good authority, by the way, that part three of “Murder, Incorporated” is in the works.)

But as I was sitting there with Mumia, I did think it was remarkable how easy he is to talk to. He’s warm and funny and wants to listen as much as he wants to share things with you — despite being one of the most important revolutionaries in the world! Then I realized — he is all of these things precisely because he is a true revolutionary. Because the role of a revolutionary is to know history and to be able to communicate it in a way that makes sense to the person sitting next to you while you eat lunch. To be hard enough to survive 38 years in prison for a crime you did not commit and strong enough to still keep your beautiful smile.

There are a great number of things that I discussed with the Professor during office hours, and I hope to be able to write about them in the columns of this newspaper in the coming weeks. But especially because the Professor is a constant reader — and that includes being a reader of Workers World — I wanted to make sure I used this opportunity to say directly: Thank you, Mumia, for being so generous with your time and for such a pleasant and educational meeting. The movement needs you more than ever, and we will stop at nothing to get you free.

Free Mumia Abu-Jamal! And then let’s get this man his damn department chair!