The Brown Berets held a National Day of Action across the country on Sept. 28. Events were held from Fresno and Sacramento in California to Chicago, Oklahoma City, Houston and El Paso. 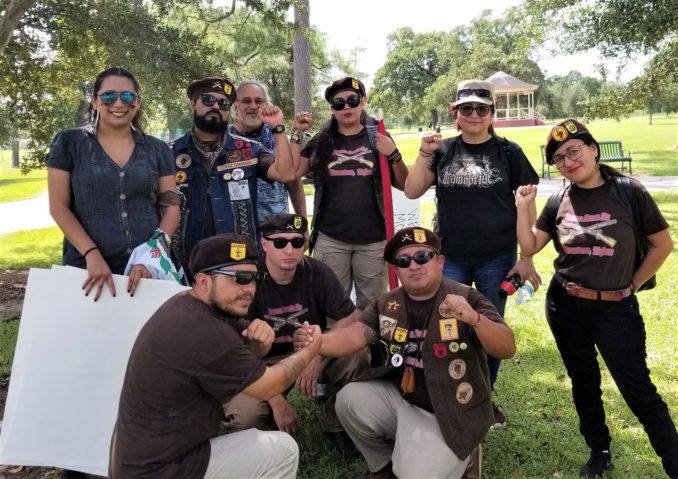 The focus was white supremacy and solidarity with the families who lost loved ones in the racist killings in El Paso. In each city the seven key points of unity agreed to last summer by La National Mesa de los Brown Berets were read aloud. (See end of article.)

Here in Houston, as the march passed stores and gas stations, chants rang out of “Viva la Raza!” and “Viva Zapata!” People on the streets responded with raised fists: “Que viva!”

Moving testimony was given by Janie Torres, the younger sister of Jose Campos Torres, who was beaten senseless by Houston cops in 1976 on Cinco de Mayo and thrown into a bayou to die. “Let’s see if the wetback can swim,” the cops said.

Revolutionary poetry by Torres’ nephew, Johnny Torres, was warmly welcomed. One poem was based on the Mexican legend of La Llorana, a mother who out of desperation drowned her children and then spent the rest of her life crying and looking for them.

“This is for every Indigenous mother who has lost her child in the crossfire of this war. Our mothers never sleep, they still roam the night, looking for their missing children. …  They can’t fight this war alone. The president terrorist damaged all the mothers’ hearts with one stone. Some people don’t ask about the lost children, but La Llorona does.”

Greetings of solidarity were given by Chiwo Luzolo of the African People’s Socialist Party. Members of the Nation of Islam, the Museo Guadalupe Aztlan and Workers World Party were in attendance.

The names of each person murdered in the El Paso Walmart on Aug. 3 were read, followed by a moment of silence. The rally ended with Milin Andy Cuetzpalin drumming and singing an Indigenous Mexican song asking for strength and protection.

The points of unity of the Brown Berets include: